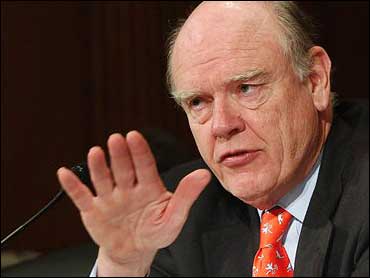 The administration defended President Bush's $2.77 trillion budget plan Tuesday against criticism that it would damage education, health care and farm programs in the name of combating budget deficits.

Treasury Secretary John Snow, among leadoff witnesses in a series of congressional hearings, said the administration had made the tough choices to fund programs that were working and eliminate those that were not.

"This budget represents the president's dedication to fiscal discipline, an efficient federal government and the continuation of a thriving U.S. economy," Snow told the Senate Finance Committee.

But critics noted that the deficit for the current budget year would rise to an all-time high of $423 billion and they questioned Bush's projections for declining deficits in future years.

Democrats said Mr. Bush's proposed budget for Fiscal 2007, beginning Oct. 1, was seriously understating spending that will be needed to fight wars in Iraq and Afghanistan and did not include the billions of dollars needed in future years to make sure the alternative minimum tax designed for the wealthy does not pinch more and more middle class taxpayers.

Sen. Max Baucus, D-Mont., said the explosion of federal deficits was adding to the national debt, requiring the administration to come to Congress in the next few weeks to raise the $8.18 trillion debt ceiling. He said all of that debt is being financed more and more by foreigners.

"America is borrowing 80 percent of the world's annual savings. We are handing our children and our children's children a set of obligations they will owe to foreign central banks," Baucus told Snow.

Sen. Kent Conrad, D-N.D., produced charts showing that the amount of federal government debt held by foreigners before Bush became president totaled $1 trillion and now in the first five years of his administration has more than doubled.

Snow said the ability of the United States to pay interest on the debt was a function of the economy's size and the vitality of the nation's bond markets.

"There is no doubt given the deep and liquid capital markets of the United States, that we will continue to attract capital from investors around the world," the Treasury secretary told the committee.

Testifying separately before the Senate Armed Services Committee, Defense Secretary Donald H. Rumsfeld said the military must continue to change in order to defend against terrorists who could get a nuclear weapon or launch a biological attack.

"No nation, no matter how powerful, has the resources or capability to defend everywhere, at every time, against every conceivable type of attack," Rumsfeld said. "The only way to protect the American people, therefore, is to provide our military with as wide a range of capabilities, rather than preparing to confront any one particular threat."

Mr. Bush's budget, which was sent to Congress on Monday, has faced predictable criticism from Democrats but it is also facing attacks from Republicans.

Sen. Arlen Specter, R-Pa., called Mr. Bush's proposed cuts in education and health "scandalous" while Sen. Olympia Snowe, R-Maine, said she was "disappointed and even surprised" at the extent of the administration's proposed cuts in Medicaid and Medicare.

Snowe pushed the administration on Tuesday to explain why it was putting so much emphasis on getting a permanent extention of reductions in taxes on capital gains and dividends when, she said, the more immediate problem was keeping the alternative minimum tax from pushing up the taxes of more of the middle class.

She said the administration's emphasis on extending its first term tax cuts rather than dealing with the AMT was "putting the cart before the horse."

Mr. Bush's spending blueprint for the 2007 budget year that begins Oct. 1 would provide large increases for the military and homeland security but would trim spending in the one-sixth of the budget that covers the rest of discretionary spending. Nine Cabinet agencies would see outright reductions with the biggest percentage cuts occurring in the departments of Transportation, Justice and Agriculture.

Senate Finance Committee Chairman Charles Grassley noted that Congress has just completed a yearlong battle to achieve far smaller savings in Medicaid and Medicare and "any more reductions of a significant scope could be difficult this year."

Mr. Bush's budget would meet his twin goals of making permanent his first-term tax cuts, which are set to expire by 2010, and cutting the deficit in half by 2009, the year he leaves office.

Democrats, hoping to wrest control of Congress from the Republicans in this year's election, charged that Mr. Bush was forced into an austere spending plan because of the estimated $1.35 trillion over the next decade that it will cost to extend his first-term tax cuts, which Democrats claim primarily benefit the very wealthy.

In addition to strict limits on most discretionary, non-security spending in the budget, Mr. Bush sought drastic cuts or total elimination on 141 programs that would produce savings of nearly $15 billion in 2007.

Mr. Bush's budget submission is just the opening round in what opponents are promising will be a spirited fight in Congress over spending priorities.