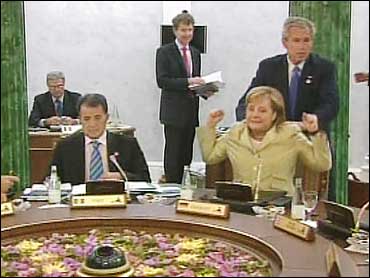 A five-second video and series of photographs recently posted on YouTube.com and various blogs show Mr. Bush surprising Merkel at the G-8 Summit by quickly and shoulders. The chancellor immediately hunches her shoulders, throws her arms up and grimaces, though she appears to smile as Mr. Bush walks away.

The video has been one of the most popular clips on the Web and spawned countless remarks on the particulars of etiquette for world leaders. Coupled with Mr. Bush's use of an expletive at the summit and a U.S. senator comparing the Internet to a "series of tubes," the incident reveals anew the power of the Web — and YouTube, specifically — to beam embarrassing political gaffes around the world.

Larry Sabato, professor of politics at the University of Virginia, agrees that today's public figures have to be more careful in "a thousand ways." But he maintains sites like YouTube can be revealing.

"If they're not doing something that's embarrassing, they have nothing to worry about," he says. "A president ought to know enough not use an expletive in a fairly open meeting, and almost any male alive today knows that you don't offer uninvited massages to any female, much less the Chancellor of Germany."

Many writers saw a sexist aspect to Mr. Bush's back rub. "This isn't a Sigma Chi kegger, it's the G-8 Summit," wrote blogger Christy Hardin Smith on Firedoglake.com.

(Mr. Bush was actually in Delta Kappa Epsilon. Another Web 2.0 truism: Blogs are not always friendly with the facts.)

Earlier this week, Mr. Bush was recorded using the s-word while discussing the Mideast with British Prime Minister Tony Blair. An mp3 of Mr. Bush's line, posted by The New York Times, has been a popular download, ranking two spots ahead of Justin Timberlake's "SexyBack" on The Hype Machine, a Web site that charts the most-linked audio tracks by blogs.

No one need remind former presidential hopeful Howard Dean of the political ramifications of the Web, nor Sen. Ted Stevens of Alaska.

The 82-year-old Republican, chairman of the Senate Committee on Science, Commerce and Transportation, has been parodied mercilessly by bloggers after referring to the Internet as a "series of tubes" and for mistakenly calling an e-mail "an Internet." A music video for the "DJ Ted Stevens Techno Remix" is currently playing on YouTube.

Like Bush's closed-door G-8 meeting, a speech by Sen. Stevens was once unlikely to reach many people. But now sites like YouTube can strike anytime, anywhere.

Even when you're getting a massage.