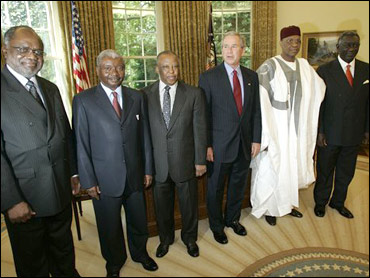 Appearing publicly with the presidents of Botswana, Ghana, Mozambique, Namibia and Niger, Mr. Bush said, "What a strong statement that these leaders have made about democracy and the importance of democracy on the continent of Africa."

"All of us share a fundamental commitment to advancing democracy and opportunity on the continent of Africa," he told the five, all elected or re-elected last year in democratic elections.

"And all of us believe that one of the most effective ways to advance democracy and deliver hope to the people of Africa is through mutually beneficial trade," Mr. Bush said.

The president touted a large jump in trade with Africa last year that he said is due to a pact he signed into law. It offers duty-free treatment on some goods and other trade benefits to 37 of the 48 nations in sub-Saharan Africa. The pact also requires participating countries to show they are making progress toward a market-based economy, the rule of law, free trade, the protection of workers' rights and policies that will reduce poverty.

He also said the United States is helping Africans by working with others in the Group of Eight major industrialized nations to eliminate more than $40 billion of debt owed by 18 of the world's poorest nations, including 14 in Africa.

"We believe by removing a crippling debt burden, we'll help millions of Africans improve their lives and grow their economies," he said.

The United States is the largest single provider of economic aid to Africa, but critics contend it is not doing enough because it has given a lower percentage of its gross domestic product in aid than other major industrialized countries.

Before appearing before the cameras, Mr. Bush and the African presidents met privately in the Oval Office. Mr. Bush said they discussed the U.S. commitment to help fight AIDS in Africa and the upcoming Group of Eight summit.

Ghana, Mozambique and Niger are three of the nations that will benefit from the debt relief package agreed to over the weekend in London by finance ministers from the eight nations. The proposal was put forward by Britain and the United States following talks in Washington last week between MR. Bush and British Prime Minister Tony Blair.

It was made possible by a significant concession by the White House, when it agreed that the debt write-off would not jeopardize future aid funding. Previously, it had insisted that debt relief come out of existing aid packages.

The elections last year saw each of the five nations represented at the White House Monday either re-elect their leaders or keep the ruling party in power.

Botswana President Festus Mogae won a new term in October elections that saw his party keep its 38-year lock on power in one of Africa's most stable, and most prosperous, democracies.

Ghana's President John Kufuor, whose election victory in 2000 marked the country's first-ever democratic transfer of power, won re-election in December. The country prides itself on leading the way for a new generation of maturing African democracies.

Armando Guebuza won in December as Mozambique's ruling party candidate, but the voting was marred by such voter apathy it raised questions about the health of the emerging democracy in one of the world's poorest countries.

November elections in Namibia saw the ruling party retain the presidency with the landslide election of Hifikepunye Pohamba.

President Mamadou Tandja of Niger, the country's first elected president to complete his term without assassination or coup, won re-election in December.