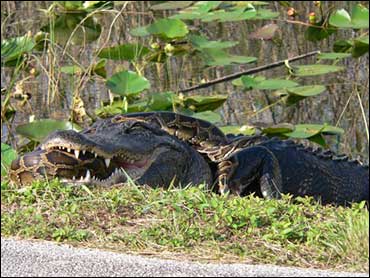 Hearing this shout, Skip Snow slammed on the brakes. When the off-roader plowed to a halt, he and his partner, Lori Oberhofer, leaped out and took off running toward two snakes, actually — a pair of 10-foot Burmese pythons lying on a levee, sunning themselves.

After slipping, sliding and tumbling down a rocky embankment, Snow, a wildlife biologist, grabbed one of the creatures by the tail. The python, Oberhofer says, did not care much for that.

"It made a sound like Darth Vader breathing," she says, "and then its head swung around and I saw this white mouth flying through the air."

Snow saw the mouth, too — the jaws open 180 degrees, the gums an obscene white, the needle-sharp teeth bared in an almost devilish grin. He let out a shriek, then blinked, and when his eyes opened the python's head was hanging in mid-air, less than a foot from his own.

Oberhofer, with a Ninja-like thrust, had snared the python in mid-strike.

"I snagged it right behind its head, on its neck," the 43-year-old wildlife technician recalls. "It was pure reflex — a defensive move. I don't know if I could ever do it again."

The python hadn't succumbed yet, however. "They defecate on you, on purpose, hoping to make you reconsider what you're doing," Oberhofer says. "It's not pleasant."

In the end, the humans were victorious, if not sweet-smelling: Both snakes were bagged, trucked off to the Everglades Research Center, euthanized and necropsied — meaning their innards were dissected, then meticulously inspected, for the benefit of science.

So goes python control in the Everglades, a painstaking, around-the-clock slog against a voracious, foreign snake species that has established a stronghold in this watery wilderness and put native wildlife at risk.

Critters that pythons find most delectable — raccoons, possums, muskrats and native cotton rats — are already under attack, as are birds such as the house wren, pied-billed grebe, white ibis and limpkin.

Scientists also worry that these slithery giants — which have been known to grow as long as 26 feet — may soon start to feast on native species whose survival is in doubt.

"The Everglades doesn't work by itself anymore," says Leon Howell, 58, who has been associated with the park for the last 21 years as a visitor, naturalist, fishing guide and, presently, park ranger. "This whole landscape has to be managed today: water, fire, exotics — you name it."

Which explains the evolution of Snow and Oberhofer into a human firewall against non-native exotics. Without them, Howell figures, "there'd be pythons all over the place."

A decade ago, Snow and Oberhofer spent their days reintroducing rare, native birds to the pinelands and monitoring "indicator" species, such as wading birds, alligators, bald eagles, panthers. Then, in the late '90s, pythons began turning up.

Pet owners were releasing their giant, unwanted snakes in and around the park. But convincing the public that pythons are a danger to this otherworldly mosaic of marshes, sloughs, marl prairies and shadowy hammocks was, and still is, a tough sell.

Perhaps that is because of the Everglades' primeval nature. Truly — where else in North America can the visitor find crocodiles, manatees and rainbow-colored tree snails, roseate spoonbills and ghost orchids, towering royal palms and gumbo limbos? Here, biblical clouds of mosquitoes can turn a white off-road vehicle black within seconds. Water lilies can perfume the air for miles.

At night, the beam of a lamp through a marsh often catches the eerie, ruby shine of a lurking alligator's eyes.

Yet, as vast and threatening as these wetlands may appear, they have been so drained and abused by humans in the last century that a population of pythons, if left unchallenged, could take down this fragile web of life within a generation.

"It's a now-or-never thing," Oberhofer says. "We still have a chance, with the python's numbers being so limited, to do something. But if we let this go, we don't know how far the pythons will migrate, how much they will reproduce."

One thing is certain, Snow says. "They'll eat just about everything that's warm-blooded."

Three years ago, a party of bird-watchers walking along the eastern Everglades' Anhinga Trail stumbled upon a death match of super predators — python versus alligator. The gator, it appeared, had the upper hand: Its jaws, capable of a bite pressure of more than 3,000 pounds per square inch, were clenched on the snake, and for hours the gator carried its prey about, waiting for the python to go limp.

But it didn't; after nearly 30 hours the python wriggled free of the alligator's jaws and swam off into the high grass. "We looked for buzzards feeding on a snake carcass," Snow recalls, "but we never found any."

That a python could survive a gator attack was a red flag, and it was soon followed by others.

In February 2004, tourists at the Pa-hay-okee Overlook watched, stunned, as a python wrapped itself around an alligator, which countered by rolling over and grabbing the snake in its mouth and swimming off. And then, last fall, the carcasses of a 13-foot python and a 6-foot gator that had squared off were found later floating in a marsh, the gator's tail and hind legs protruding from the split-open gut of the python.

The Burmese python, one of the six biggest snakes, does not possess fangs and is not venomous. Rather, it is a sit-and-wait ambush hunter of the first order. Typically, it bites prey with six rows of needle-sharp, back-curving teeth, which dig deeper when its target tries to pull away. It then coils itself around its victim, squeezes the life out of it, and swallows it whole. Its stomach acids quickly dissolve even bone, Snow says.

In the wild, pythons often reach 20 feet in length, weigh more than 200 pounds, and grow strong enough to overpower a grown man. Hinged jaws, in fact, enable the snake to open its mouth wide enough to accommodate humans.

Native to Southeast Asia, the Burmese python — Python molurus bivittatus — has come to the Everglades by way of the burgeoning, global trade in exotic pets, creatures of many kinds shipped to America legally and distributed through pet shops and flea markets. Today, Americans may own 22 of the 24 python species that exist.

Since 2000, slightly more than 1 million pythons have been imported by the United States for commercial sale; nearly half are shipped to Miami, the U.S. Fish & Wildlife Service says.

Python hatchlings, which can cost as little as $20 at a flea market, tickle armchair herpetologists. "They're so darling when they're tiny," Oberhofer says. "Later, the big attraction at home is being able to watch your python kill something — like a rat — and gobble it whole in its tank."

Soon, however, the python gets bigger than the kids. (Pythons, fed a steady diet of mice, squirrels and rabbits, grow 6 to 8 feet, or bigger, within a year.) When this happens, owners try to sell or give away their pets but cannot find them new homes. Unwilling to euthanize their beloveds, many release pythons into the wild, unaware of the ecological havoc they may bring.

Which brings to Oberhofer's mind a story about Guam, where she once worked with other biologists.

"Two exotic species were introduced there," she says, "the brown-tree snake and a little lizard that the snake liked to eat. Well, the lizards multiplied like crazy, which meant that the brown-tree snake had so much to eat it proliferated" — and consumed many other species.

Today, Guam's forests have gone silent, she says. "The brown-tree snakes ate the native birds and bats to extinction. Those birds are found only in zoos now."

One recent afternoon, Snow took a visitor into a field of chest-high cane grass to check on his latest invention: a 2-by-4-foot, steel-mesh trap fashioned especially for pythons. The trap had wide, PVC tubes on both ends (entrances for the big snake) and a cage within the cage holding a rat — python bait.

But there was no python.

"It hasn't worked very well. We haven't caught any pythons with it yet — just small, native snakes." Snow adjusts his cap, frowns, then gazes across the field, still but for a lazy breeze rustling the high grass. The stillness doesn't fool Snow.

"I've walked right by pythons and not even known they were right next to me," he says. "Most times, you can't see the enemy until you stumble across it."

Crunching his way back to the off-roader, eyes darting this way and that, he described tactics to control pythons. One idea, recommended by snake management experts, has produced results: implanting captured pythons with radio transmitters and releasing them into the wild to track their movements, habitat use and breeding patterns — and to betray the locations of other pythons.

"It's all based on the Judas concept," Snow said, noting that four "tagged" pythons had led to the capture of 12 others through October and that three more pythons with transmitters have since been released.

Snow suspects that female pythons lay down trails of chemical scent "cues" for suitors. If scientists could develop synthetic cues, he says, the chemicals might be used to draw pythons into one of his traps.

Does it mean pythons are multiplying at a faster rate? Or is it that the python detectives are just more effective at nabbing them?

Snow won't say — and he'd rather not hazard a guess at how many pythons are living, or breeding, in the Everglades.

Most of the caught pythons are euthanized because of the threat they pose to at-risk native species such as the mangrove fox squirrel, the wood stork and the endangered Key Largo wood rat. Pythons may also be competing for space with the threatened Eastern indigo snake.

And so, the python detectives muck about limy marshes and brackish ponds by day and cruise the main park road after sundown.

On a recent nocturnal patrol, Snow is crawling along Route 9336 near Nine Mile Pond, the off-roader's headlights catching the occasional heron or white ibis, when, suddenly, he hits the brakes, grabs his 4-foot "snake tongs" and hops out into a gathering of flies.

On the blacktop, in a cone of light thrown by Snow's headlamp, lies a rattlesnake, a four-footer. It doesn't budge.

"Ah," Snow grunts, lifting the rattler with the tongs and slinging it off into the bush. "Road kill."

Vehicles strike pythons sometimes, too, but bodies are rarely found. Do they survive? Do they go so deep undercover that scavengers don't find them? "Just another thing we don't know about the enemy," Snow says.

He trains his gaze to the west, looking for something other than the spiked grass silhouetted against a moonlit sky. Pythons need not be seen to make this landscape creepy.

The creepiness comes with knowing they are out there, somewhere.