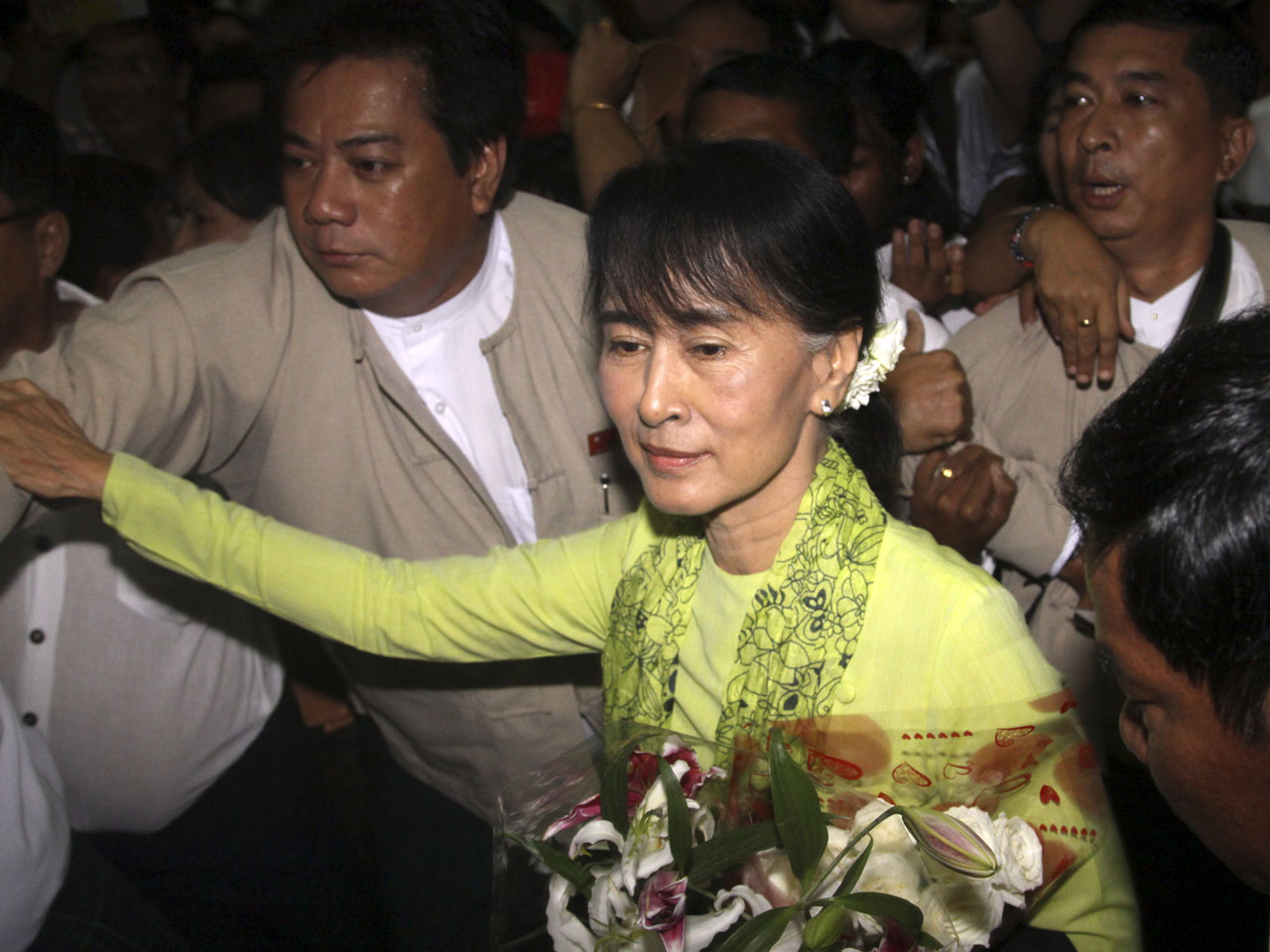 The Nobel Peace laureate will be presented with Congress' highest award during a 17-day visit that comes as the Obama administration considers easing remaining sanctions on the country, also known as Burma. In the latest step toward political opening, Burma announced a new round of prisoner releases, hours before Suu Kyi touched down in Washington.

Suu Kyi meets Tuesday with Secretary of State Hillary Rodham Clinton and is likely to visit the White House. She then goes to New York, the American Midwest and California in a whirlwind of speaking engagements and award ceremonies, as if making up for lost time for the years of confinement that prevented her from traveling overseas since the late 1980s.

Since her release from house arrest in late 2010, Suu Kyi has transitioned from dissident to parliamentarian. Burma has shifted from five decades of repressive military rule, gaining international acceptance for a former pariah regime.

Now confident of her position inside Burma, Suu Kyi has in the past four months started to spread her wings. She has traveled to Thailand and five nations in Europe, where she was accorded honors usually reserved for heads of state.

Revered by Republicans and Democrats alike, Suu Kyi will get star treatment in the U.S. too, although her schedule is being carefully planned to avoid upstaging Burma President Thein Sein, who arrives in the U.S. the following week to attend the U.N. General Assembly's annual gathering of world leaders in New York.

"The idea that she will be at the Rotunda of the U.S. Capitol, to receive the highest award Congress can give, just a couple of years after she was under house arrest in her own country, is just remarkable," said Rep. Joe Crowley, D-N.Y., one of the lawmakers who sponsored her 2008 award of the Congressional Gold Medal.

For years, some of Washington's most powerful politicians have been among Suu Kyi's strongest advocates in a rare show of bipartisan consensus. Both when sanctions against the Burma junta were imposed, and over the past year when they have been suspended, Democrats and Republicans have found common cause.

The Obama administration is now considering easing a ban on imports from Burma into the U.S., the main plank remaining in the tough economic sanctions that Washington has chipped away at this year to reward the country's progress toward democracy.

While Congress last month renewed the sanctions for another year, President Barack Obama could waive its provisions. He may, however, look for further concrete action by Burma to earn it.

Burma appeared to take a step in the right direction Monday when it announced it was freeing more than 500 prisoners, which activists expected to include dozens of political detainees. It also replaced a press watchdog agency criticized as repressive with a new more liberal council in what was seen as a boost for freedom of expression.

Suu Kyi is under political pressure from Thein Sein's government to press the U.S. to remove the restrictions — and it's a step that she appears willing to consider, although many of her longtime supporters in exile oppose it, saying Burma should not be rewarded at a time when ethnic violence is escalating in some parts of the country.

"We don't want to say whether the U.S should maintain the import ban or not," Suu Kyi's party spokesman Nyan Win said ahead of her visit. "I understand the U.S is keeping the import ban because they want to keep a watch on the country's political and economic reform and I think the U.S should continue to observe" the situation.

Combining high-level meetings with award ceremonies and get-togethers with Burmese expatriates, Suu Kyi will have a frenetic schedule in the U.S.

She arrived with little fanfare Monday, evading journalists waiting at the airport. She spends four days in Washington. Her meeting with Clinton — who made a landmark visit to Burma last December — will be followed Wednesday with the congressional award ceremony and meetings with House and Senate leaders. The White House has yet to announce whether she will meet Obama. Suu Kyi will also address human rights activists and meet Burmese journalists at Voice of America and Radio Free Asia.

She then travels to New York, where she worked from 1969 to 1971 at the United Nations. Her schedule is carefully arranged not to clash with Thein Sein's but she is slated to attend a high-level meeting organized by U.N. Secretary-General Ban Ki-moon, a day before the Burma leader addresses the General Assembly.

Suu Kyi will then go to Kentucky to address the University of Louisville, before traveling to meet with one of America's largest Burmese communities in Fort Wayne, Ind. She will also visit San Francisco and Los Angeles.