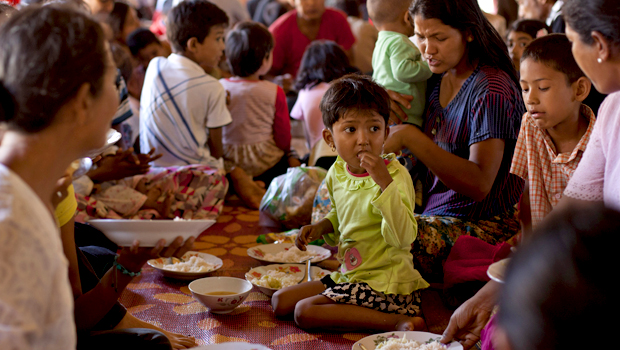 LASHIO, Myanmar More than 1,000 Muslims who fled Burma's latest bout of sectarian violence huddled Thursday in a Buddhist monastery guarded by army soldiers as calm returned to this northeastern city, though burnt out buildings leveled by Buddhist rioters still smoldered.

The army transported terrified Muslim families by the truckload out of a neighborhood in Lashio where overturned cars and motorcycles that had been charred a day earlier left black scars on the red earth.

"We heard things could get worse, so we waved down soldiers and asked them for help," said 59-year-old Khin Than, who arrived at the monastery Thursday morning with her four children and sacks of luggage along with several hundred other Muslims. "We left because we're afraid of being attacked."

The violence in Lashio this week highlights how anti-Muslim unrest has slowly spread across Burma, also known as Myanmar, since starting last year in western Rakhine state and hitting the central city of Meikhtila in March. President Thein Sein's government, which inherited power from the military two years ago, has been heavily criticized for failing to contain the violence.

In Lashio on Thursday, Buddhist monks organized meals for the newly arrived refugees, who huddled together in several buildings in the monastery compound.

Although a few Buddhist men could still be seen Thursday riding motorbikes with crude weapons such as sharpened bamboo poles, no new violence was reported. Several banks and shops reopened as residents emerged to look at destroyed Muslim shops. Trucks of soldiers and police crisscrossed main roads. They guarded the ruins of Muslim businesses that were reduced to ashes on Tuesday and Wednesday, erecting roadblocks from twisted debris.

At one corner, where the charred remains of a three-story building still smoldered, Muslim residents sorted through rubble for anything salvageable. One family packed electronics from their shop into the back of a truck.

A woman who had fled a mob a day earlier was still in a state of shock.

"These things should not happen," said the woman, Aye Tin, a Muslim resident who slept overnight in a local Red Cross compound. "Most Muslims are staying off the streets. They're afraid they'll be attacked or killed if they go outside."

The rioting began Tuesday after a Muslim man splashed gasoline on a Buddhist woman and set her on fire. Buddhist mobs responded by burning down several Muslim-owned shops, a mosque and an Islamic orphanage. Roving motorcyclists continued the violence on Wednesday, leaving one person dead and four injured.

Presidential spokesman Ye Htut said 25 people had been detained so far. He said all those arrested were from Lashio.

The violence is casting fresh doubt over whether Thein Sein's government can or will act to contain the racial and religious intolerance plaguing a deeply fractured nation still struggling to emerge from half a century of military rule. Muslims, who account for about 4 percent of Burma's roughly 60 million people, have been the main victims of the violence since it began last year, but so far most criminal trials have involved prosecutions of Muslims, not members of the Buddhist majority.