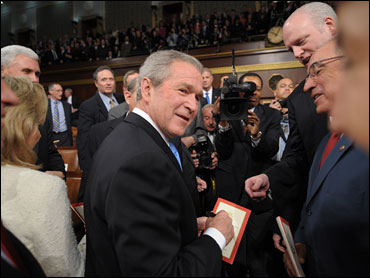 (AP Photo/Tim Sloan)
Yesterday, CBS News Capitol Hill producer Evelyn Thomas explained how some cavalier members of Congress go about reserving prime State of the Union seats – the aisle seats that garner maximum on-camera time, and maximum face-time with the president. Procuring these seats requires an intricate, early-morning dance – and name-cards. Click here to read more about it. And read on for a behind-the-scenes update from Evelyn.

When the tough get going, the tough … retain their seats.

So here's what happened: For the first time, tradition was in jeopardy.

The announcement said the only way to save a seat was by physical presence. Hey, isn't that changing rules midstream? Is this allowed? It can't be fair? Ah, but not to worry, this group is creative, persistent and determined.

At show time we saw the usual group. Jessie Jackson, Jean Schmidt, Shelia Jackson and Eliot Engle – to name a few of the regulars – were each in their places with bright shiny faces.