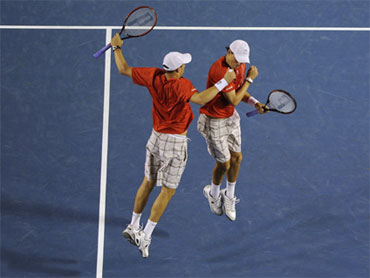 The top-seeded Bryans picked up their eighth Grand Slam title in doubles.

They faced two break points in the ninth game before winning the opening set when Zimonjic hit a backhand long. Zimonjic and Nestor were down 5-2 in the tiebreaker before winning five straight points to take the second set.

In the decider, the Bryans got a service break in the fourth game, and celebrated their win a brotherly hug at the net.

"Maybe another final, a smaller tournament, that could have broken us," Bob Bryan said of the second-set letdown. "But when you play two weeks here and it's a Grand Slam final, you don't let anything get you down.

"I thought actually our energy went up in the third. We kind of had out-of-body experiences ... just got across the finish line somehow."

The U.S. pair have won the title four of the past five years. They lost in the finals the two previous years.

As if it wasn't confusing enough to tell the identical Bryan brothers apart, all four players on court were wearing red shirts and white shorts.

Venus and Serena Williams won the doubles on Friday and Serena took the singles title in three sets over Justine Henin on Saturday.

The Bryans, who regained the No. 1 ranking at the end of last year, switched sides of the court in an effort to turn around their poor record against Nestor and Zimonjic.

"We thought we would try something different," Mike Bryan said. "They've kind of had our number. Last year they beat us in a lot of finals. We decided to throw a new look at them.

"We used to play like that early in our career. We've had some experience doing it. Our first time in a Grand Slam final playing that way, but it seemed to help."

The Bryans are No. 2 in overall Grand Slam doubles titles, with Australians Todd Woodbridge and Mark Woodforde leading with 11 together.

"That's on our mind obviously," Bob Bryan said. "But it's a few Sundays away before we get to that point. The Woodies are our idols. To be considered in the same league with those guys is an honor itself. I imagine if we stay healthy, we might touch that mark.

"If we do, we definitely want to honor those guys for all they've done for us. Todd, when he retired, he's given us advice. They've been extremely nice to us when we were youngsters."

The Bryans will turn 32 in April, but think they have some good years left.

"We'd love to keep going as long as possible," Mike Bryan said. "I think we can. Bodies are still feeling good. Doubles is a sport or a game where you can play up until you're almost 40. We're loving what we're doing."

The brothers will play Davis Cup for the United States from March 5-7 on indoor clay in Belgrade against Serbia, likely led by Novak Djokovic.

Team stalwarts Andy Roddick and James Blake will not be playing singles for the United States, likely to be replaced by John Isner and Sam Querrey.

"Andy has always been the leader of the team," Bob Bryan said. "We've always looked to him for support and experience. He's been incredibly clutch on the Sundays.

"Now we're kind of stepping into that role as team leaders and the veterans. Hopefully, we can help settle the nerves of Isner and Querrey."
By AP Sports Writer Dennis Passa