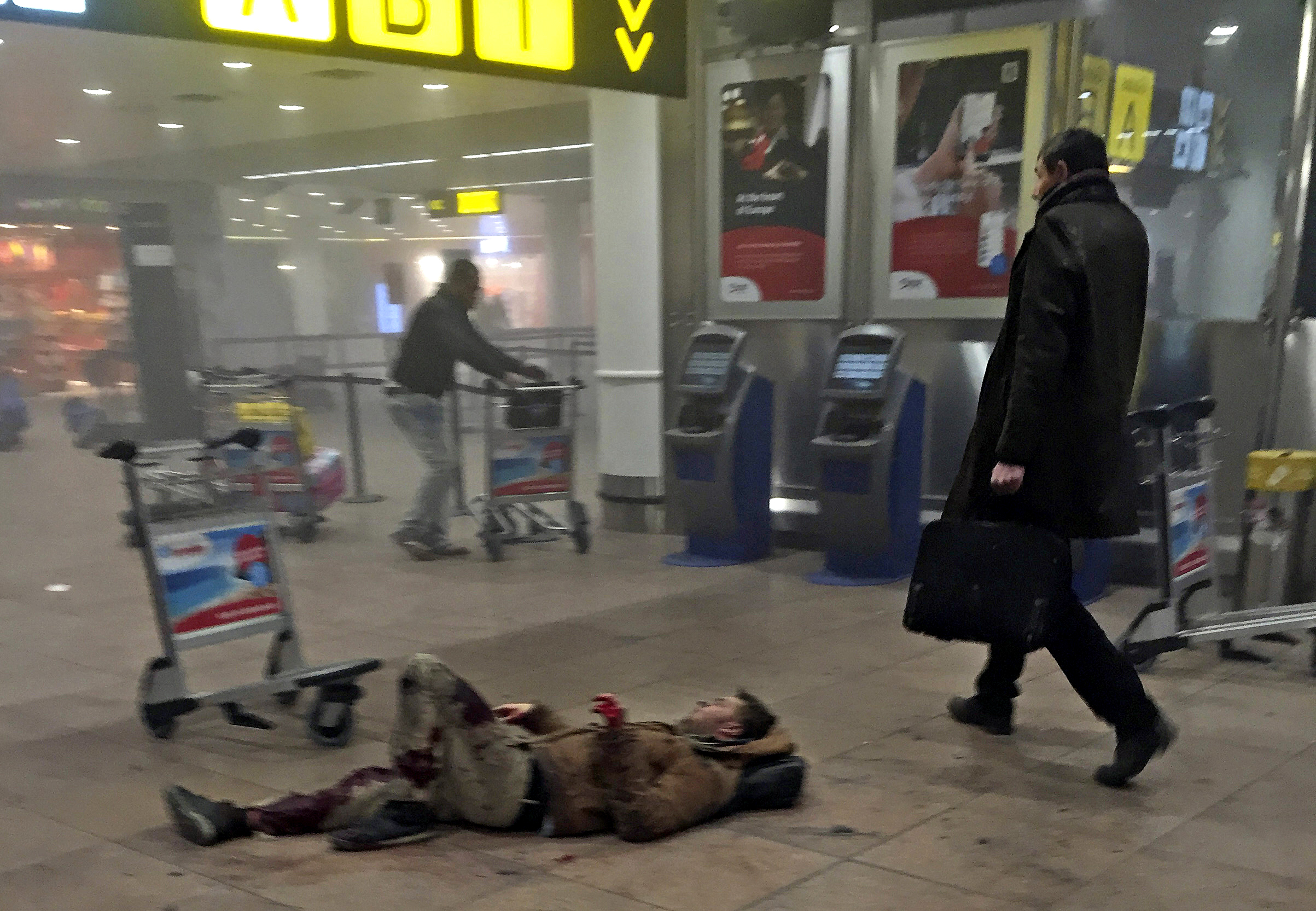 At least 31 people were killed and more than 200 were injured by the blasts, at least one of which was likely caused by a suicide bomber.

Anthony Deloos, an airport worker for Swissport, which handles check-in and baggage services, said the first explosion took place near the Swissport counters where customers pay for overweight baggage. He and a colleague said the second blast hit near the Starbucks cafe.

"We heard a big explosion. It's like when you're in a party and suddenly your hearing goes out, from like a big noise," Deloos said, adding that shredded paper floated through the air as a colleague told him to run.

"I jumped into a luggage chute to be safe," he said.

Tom De Doncker, 21, check-in agent intern, was near the site of the second explosion.

"I saw a soldier pulling away a body," he said. "It felt like I was hit too" from the concussion of the blast.

Zach Mouzoun, who arrived on a flight from Geneva about 10 minutes before the first blast, told BFM television that the second, louder explosion brought down ceilings and ruptured pipes, mixing water with victims' blood.

"It was atrocious. The ceilings collapsed," he said. "There was blood everywhere, injured people, bags everywhere."

"We were walking in the debris. It was a war scene," he said.

Near the entrance to Brussels' Maelbeek subway station, not far from the headquarters of the European Union, rescue workers set up a makeshift medical treatment center in a pub. Dazed and shocked morning commuters streamed from the metro entrances as police tried to set up a security cordon.

"The Metro was leaving Maelbeek station for Schuman when there was a really loud explosion," said Alexandre Brans, 32, wiping blood from his face. "It was panic everywhere. There were a lot of people in the Metro."

Brian Carroll, an American who has lived in Brussels for more than two years, was on a subway car near the Maelbeek Metro station when a bomb went off Tuesday morning. He told "CBS This Morning" that the attack unfolded "literally minutes" after he stepped on the train.

"There was a massive explosion," he said. "You could feel it through the metro train. The lights went out. The power went out. Everyone dropped to the floor. People were crying and screaming and others were yelling for everyone to calm down. I also went straight for the floor, and we were waiting there for a little bit, and there were multiple explosions. You could hear them, you could feel them."

Carroll said that eventually he and other passengers pried open the subway door to evacuate.

"I kind of also had a moment of, 'Do I stay on the train and wait and hope it goes away or do I make a run for it not knowing what's on the other side of the platform?' And I decided to go make a run for it," he said. "I stayed to the side and ran out to the exit. It was clear there was debris everywhere. There was smoke everywhere. Glass... It happened quickly, and then -- but it was clear, as soon as it happened, it was a terrorist attack."

At the airport, passengers also fled as quickly as they could.

Amateur video shown on France's i-Tele television showed passengers including a child running with a backpack dashing out of the terminal in different directions as they tugged luggage. Another image showed a security officer patrolling inside a hall with blown-out paneling and what appeared to be ceiling insulation covering the floor.

Marc Noel, 63, was about to board a Delta flight to Atlanta, to return to his home in Raleigh, North Carolina. A Belgian native, Noel says he was in an airport shop buying automobile magazines when the first explosion occurred 50 yards away.

"People were crying, shouting, children. It was a horrible experience," he told AP. He said his decision to shop might have saved his life. "I would probably have been in that place when the bomb went off."

U.S. officials told CBS News they believed Americans had been injured in the blasts, but there was no confirm on the number or condition of the casualties, and the State Department was still trying to track down families.

With three runways in the shape of a "Z," the airport connects Europe's capital to 226 destinations around the world and handled nearly 23.5 million passengers in 2015.

Passengers were led onto the tarmac and the crisis center urged people not to come to the airport. More than 200 flights to Brussels were diverted or canceled, according to flight tracking service Flightradar24.

Authorities told people in Brussels to stay where they were, bringing the city to a standstill. Airport security was also tightened in Paris, London and other European cities.

In Paris, France's top security official said the country was immediately reinforcing security at airports, train stations and metros. Security was also ramped up in Washington, D.C. and New York.