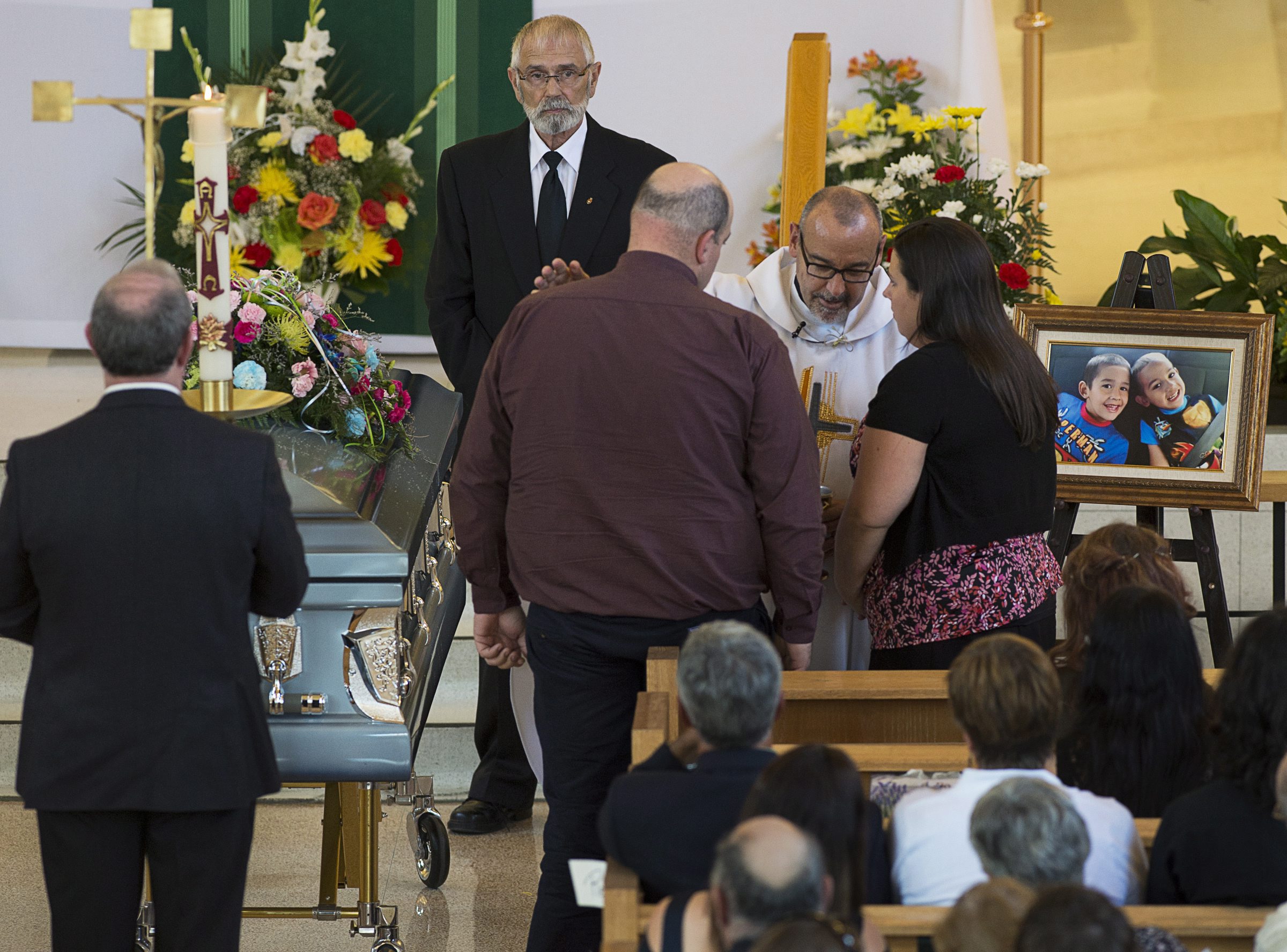 CAMPBELLTON, New Brunswick Hundreds of people attended the funeral service Saturday for two brothers who were killed by a python while they slept at a friend's home above an exotic pet store.

Four-year-old Noah Barthe and his 6-year-old brother Connor were eulogized during the service at St. Thomas Aquinas Roman Catholic Church in Campbellton, New Brunswick. Campbellton Deputy Mayor Ion Comeau said the family decided that the brothers would be buried together in a single casket.

The two boys were found dead Monday morning after a 100-pound African rock python escaped its enclosure in the apartment where they were staying. Police say the snake slithered through a ventilation system located above its tank and fell through the ceiling into the living room where the boys slept. Preliminary autopsy results show the boys were asphyxiated by the python.

The Rev. Maurice Frenette told the boys' parents, Mandy Trecartin and Andrew Barthe, that their lives have been changed forever in ways no one else can imagine.

"We all try to understand the best we can, but you know, no one here can feel what you feel. But I am sure that everyone here feels for you, for what you are going through," he said.

Questions still surround the circumstances of the boys' deaths, but before the service Frenette said the funeral was a time to help the family.

"We're not here today to make any judgment or to try to find an answer to the inquiry, but we are here to take a pause and to be with the family," he said. "Today we want to basically be there for them and tell them of all the love we will try to share with them during this time of sorrow."

In front of the altar was a photo of the two boys, their heads leaning against each other with broad smiles on their faces. The boys were remembered for their love of video games, playing outdoors and the differences in their personalities. Connor was loud and Noah was quiet, but they shared a special bond and "needed to be near each other," said family friend Melissa Ellis.

"If people all over the world are feeling even a fraction of what we felt over the almost seven years of knowing the boys — inspired, lucky, blessed, hopeful — then our hearts are full," Ellis said. "The boys are continuing to change people, help people and heal people's hearts, including ours."

Provincial officials have said the African rock python was not permitted in New Brunswick.

On Friday, 23 reptiles that were banned without a permit in New Brunswick were seized from the pet store, while four large American alligators were euthanized.

The store and apartment where the boys died are owned by Jean-Claude Savoie, a family friend of the boys who took them shopping and to a farm before the sleepover on Sunday with his son. Savoie has not returned repeated messages seeking comment.

During a stop in New Brunswick on Friday, Canadian Prime Minister Stephen Harper expressed his condolences to the family of the boys and said the federal government would review what happened to determine whether it should play a role in the regulation of exotic pet shops.

Comeau said Campbellton and other municipalities should await the outcome of the police investigation before changing any regulations.

"We don't want to make any decisions yet," he said. "I know it is something that will be on the agendas of many, many municipalities ... looking at what can be done to prevent such a tragedy."