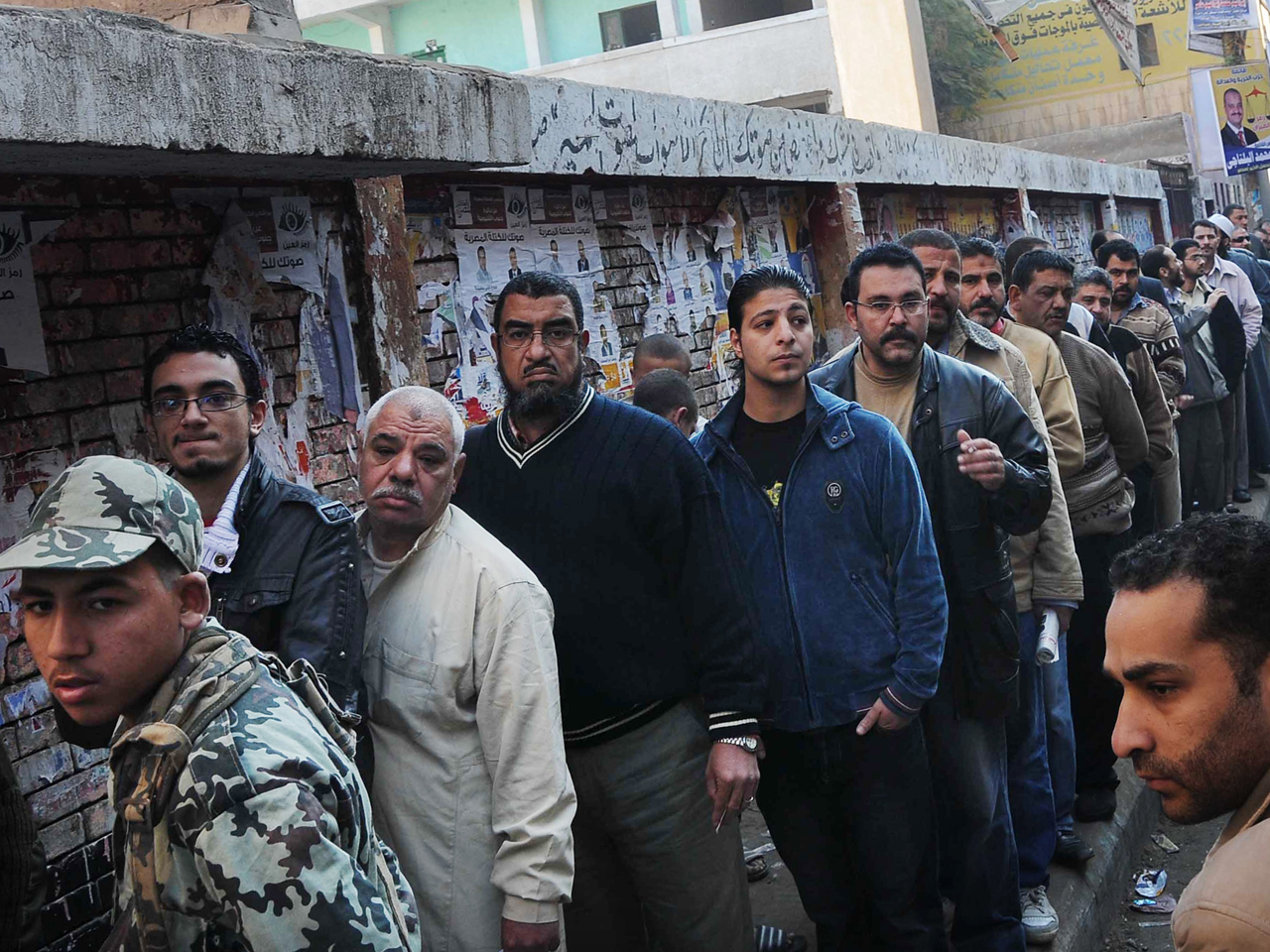 CAIRO - Egyptians voted Tuesday in the final round of elections likely to seal the domination by Islamists over the country's new parliament as secular activists grew increasingly worried over the possibility of an alliance between the powerful Muslim Brotherhood and the ruling military.

Meanwhile, the New York Times reports the Obama administration is crafting a new policy on Egypt which has already seen the U.S. reach out to work the Brotherhood - a political group long-considered hostile to American interests.

Activists point to what they call mounting signs of a confluence of interests between the Brotherhood, who are set to be the biggest bloc in the next parliament, and the ruling generals. The result, they fear, will be a shelving of reforms for greater democracy that they hoped for after the Feb. 11 fall of President Hosni Mubarak.

"Some very turbulent months are ahead of us," said prominent rights lawyer and activist Negad Borai.

"The military wants a safe return to its past life away from the limelight and with its privileges and prestige, and the Islamists want power. The two have a deal that's at everyone else's expense."

The multistage elections for the 498-seat parliament, the first to be held since Mubarak's ouster, have been the fairest and freest in living memory, a sharp contrast to the large scale rigging and fraud that defined almost every election since army officers seized power in a 1952 coup.

The fundamentalist Muslim Brotherhood, the nation's largest and best organized political group, and the ultraconservative Islamic Salafis have dominated the first two rounds of the vote held since November, together gaining about 70 percent of the vote. That trend is expected to continue in the third and final round, which began Tuesday.

Their triumph has come at the expense of liberal and left-leaning parties and youth groups behind Mubarak's ouster who have since been calling for the military to immediately step down.

On Tuesday, the State Department resumed its criticism, saying the military had not carried out promises to stop harassment and return computers and documents confiscated from the groups. "It is, frankly, unacceptable to us that that situation has not been returned to normal," spokeswoman Victoria Nuland said.

"Non-governmental organizations, particularly those who support democracy and a free election process are key part of what the transition to democracy is about," she said, adding that, "We seem to have some Mubarak holdovers in the government who don't seem to understand how these organizations operate in a democratic society and are putting out lots of disinformation about them."

The Brotherhood has denied having any deal with the Supreme Council of the Armed Forces, the group of generals that took power after Mubarak's ouster.

Meanwhile, the New York Times reports that a flurry of high-level meetings between U.S. officials, including Sen. John Kerry, and Brotherhood leaders represents a dramatic shift in the American attitude toward the Muslim party.

An unnamed senior U.S. official told the newspaper it would be "totally impractical" not to engage the Brotherhood, "because of U.S. security and regional interests in Egypt."

"There doesn't seem to me to be any other way to do it, except to engage with the party that won the election," the Obama administration official told the Times, before pointing to the Brotherhood's recent statements "conveying a moderate message -- on regional security and domestic issues, and economic issues, as well."

As CBS News analyst Khaled Wassef points out, there are inherent limits to any cooperation the Brotherhood might seek with the military, given the political party's own aspirations to consolidate power across the nation.

In a recent comment, a Brotherhood leader even suggested one of the first votes the new parliament would undertake would be one on whether Egypt should stop accepting the current $1.3 billion of aid from the U.S. - aid which goes straight to Egypt's military. The U.S. has not threatened to end the payments.

The Brotherhood, says Wassef, has a well-established history of switching its stance on issues in an effort to gain influence.

When the calls for mass protests against the Mubarak regime were issued on Jan. 25, for instance, the Brotherhood - long-sidelined by Mubarak - was the first entity in Egypt to reach out to the regime and offer to help facilitate a transition of power to Ehud Mubarak's son.

Just three days later, however, when the scale of the popular support for the protests became apparent, the Brotherhood backed away from the regime. Its members would soon become prominent among the protest movement.

Activists say, nevertheless, there are signs of at least an understanding between the two sides over what comes next in Egypt after the elections and the scheduled convening of the new parliament on Jan. 23.

Several major issues dominate the next stage — particularly, what powers the parliament will have, who will oversee the process of writing the next constitution, and how the generals will hand over power, as they have promised to do after presidential elections set for the end of June.

Weeks ago, the Brotherhood and military appeared on route for a possible confrontation. The Brotherhood demands that the parliament be allowed to form a government and have full powers to create a 100-member panel that is supposed to draft the constitution.

The military, however, initially demanded considerable powers in setting who would be eligible to serve on the panel and insisted that it, as head of state, would form the government. It also tried to carve out a special role for itself, saying that under the future system, parliament would have limited power to oversee its budget.

Since then, the generals have backed down on their attempts to dominate the constitutional panel and determine the government.

Brotherhood officials, in turn, have been quoted in the press saying they would not object to granting the military protection from civilian oversight and to negotiate a "safe exit," or immunity, for the generals.

Activists fear the two sides are working out an arrangement by which the Brotherhood would take a key role in writing the constitution and have a freer hand in bringing Egypt in line with a stricter interpretation of Islamic Shariah law. In return, the Brotherhood would use its power in parliament to allow the military to retain its privileges and political influence and hold immunity from prosecution after they hand over power.

Several youth groups have said they are gathering evidence of military involvement in the deaths of scores of protesters since Mubarak's ouster to use in attempted prosecutions either in Egypt or abroad.

"The Brotherhood has forgotten about the revolution and is now only interested in its spoils," said Enjy Hamdy, an activist with April 6, a group that played a key role in the uprising that ousted Mubarak and a prime target of the generals' campaign against youth groups.

"It is not quite a deal, but more like the fruit of mutual interests," she said.

Activists have frequently accused the Brotherhood of opportunism and a determination to seize power. The group initially stayed out of the anti-Mubarak uprising, though its disciplined followers later lent considerable street muscle to protesters' street battles against attacking security forces and Mubarak loyalists. It has largely stayed out of antimilitary protests since, except for a major march in early November against the military's attempts to dominated the constitutional process.

Brotherhood officials counter criticism saying they are relying on the democratic process, rather than protests. With its nationwide organization, the group has garnered between 40 to 50 percent of the vote in the first two rounds. The Salafis' Al-Nour Party has taken another 20 percent.

Many Egyptians have expressed exhaustion with protests and have sought calm to restore a worsening economy. The elections have enjoyed a heavy turnout. Tuesday was the first of two days of voting, to be followed by run-offs next week. Final results amassing all three rounds are due to be announced Jan. 13.

The voting coincided with a new session in the trial of Mubarak, which many Egyptians see as one of the main fruits of the revolution. Mubarak, his former security chief and several top security officers are on trial for the killing of protesters during the uprising against him. Mubarak and his two sons are on trial on corruption charges.

Mustafa Suleiman branded Mubarak a tyrant who spent the last 10 of his 29-year rule preparing for his son Gamal to succeed him at the helm.

"He deserves to end in humiliation and indignity: From the presidential palace to the defendants' cage and then the harshest penalty," said Suleiman, whose hour-long comments mesmerized the courtroom, set up at a police academy that once bore Mubarak's name.

Mubarak could face the death penalty if convicted of complicity in the killing the protesters.

The Mubarak trial, said Suleiman, "ushers the end of a long era of tyrannical rule, a time when the ruler took himself to be a substitute for the people and to be above the law."