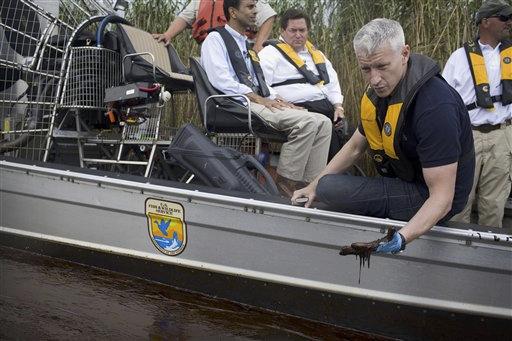 Tom Brokaw signed off as anchor of NBC Nightly News for the last time tonight by reminding his viewers how much they'd been through together. He has been the face of NBC's evening broadcast for almost 23 years.

"We've been through a lot together, through dark days and nights, and seasons of hope and joy," he said.

"What have I learned here?" Brokaw rhetorically asked viewers. "More than we have time to recount this evening."

He thanked a "large and thoroughly dedicated staff that extends from beyond these cameras to around the world," by saying he is just the most conspicious part of the NBC News crew.

Brokaw's final broadcast touched on the greatest life lessons he's learned: those of perseverence and and unity from the men and women of the Great Depression era.

"They never stopped learning from each other, and they did not give up on the idea that we're all in this together," Brokaw said, addressing his viewers. "And we still are. It is in that spirit I say thanks for all that I've learned from you."

He included bits of personal wisdom.

"It's not the questions that get us in trouble," Brokaw said. "It's the answers. And no one person has all the answers."

Making good on an exit plan announced in May 2002, Brokaw, 64, is stepping away from daily journalism to pursue his varied other interests, including spending more time on his Montana ranch. But his NBC association will continue under an agreement to host at least three documentaries a year.

Williams and Brokaw shared a piece of digitized emotion as Williams ended his segment on military amputees by saying, "And with that, Tom, one last time, back to you."

Brokaw smiled and looked down.

Earlier in the day, Brokaw struggled to maintain his composure on NBC's Today show Wednesday morning, as he was being toasted by his staff on his last day as "NBC Nightly News" anchor.

"It's been a great, great ... privilege," Brokaw said before becoming visibly overcome with emotion. "I didn't think I was going to do that."

Hosts Katie Couric and Matt Lauer clinked champagne flutes with Brokaw, as he was surrounded by several staff members.

"Tom's career at NBC has been an outstanding one by any measure," said CBS Evening News anchor Dan Rather, who himself has announced plans to leave the anchor desk in March 2005. "With hard work, integrity, and talent, he has earned the great respect and admiration of the American audience and of his peers, certainly including this one."

Brokaw, a South Dakota native who joined NBC in 1966, was White House correspondent from 1973-76, encompassing the Watergate years. He anchored "Today" from 1976-81.

He began his "Nightly News" run in April 1982, sharing the anchor title with Roger Mudd, who reported from Washington in a partnership that NBC brass hoped would revive the glory years of the Huntley-Brinkley team.

It didn't, either with ratings or chemistry between Mudd and Brokaw. In September 1983, Brokaw emerged as solo anchor — just days after Peter Jennings began soloing on ABC's World News Tonight.

As Brokaw marked his 30th anniversary with NBC in 1996, he recalled the precipitous ups and downs at the network where he stuck it out and prospered.

"I never expected the waves would be quite as steep as they were," he admitted. "But even in the worst of times, it was better than anything I thought I'd ever have in life."

During a most chaotic era — in 1981, with NBC's prime-time ratings in a tailspin — Brokaw almost leaped to ABC News, whose new boss, Roone Arledge, had come courting.

"I came very, VERY close to going," Brokaw said. "So close that I went out to dinner with (wife) Meredith and said, `I'm gonna do this,' and she went to bed thinking it was a good idea. Then I sat up and drank some scotch and smoked a cigar and stared out the window for several hours."

What he saw, of course, was his future at NBC — which, as Brokaw would be the first to point out, hasn't ended yet. He has agreed to host a handful of documentaries each year for the network.

Before signing off Wednesday night, Brokaw issued a comment on his work, and his obligation to the public as a journalist.

"Whatever the story, I had only one objective, to get it right," he said. "When i failed, it was personally painful, and there was no greater urgency than...corrections."

"On those occasions I was grateful for your fore bearance and mindful that your patience and attention did not come with a lifetime warranty," Brokaw said.

"Tom and I have been friends and competitors going back more than 30 years," said Rather. "In this time I have learned that, when it comes to competition, Tom is tough but always fair...and when it comes to friendship, Tom keeps his friends close and stands by them even when the going is hard."

Although he is leaving the nightly news, Brokaw issued a caveat: "I'll report for duty," if a huge story breaks, he told The Associated Press recently. "It doesn't mean I'll go back to what I did before. They'll have to find a new role for me."

Brokaw closed his broadcast with a slightly modified version of his signature sign off: "You'll see Brian Williams here tomorrow night, and I'll see you along the way."