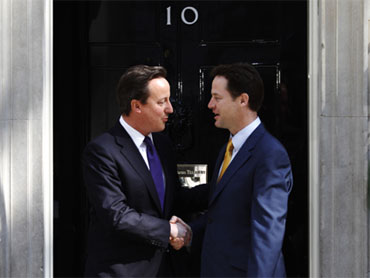 Britain woke up to a new political era Wednesday with the first coalition government since World War II - an unlikely marriage between the Conservative Party and the left-leaning Liberal Democrats.

With a handshake, smiles and waves, the Conservative Prime Minister David Cameron welcomed his new coalition partner, Deputy Prime Minister Nick Clegg, outside the shiny black door at 10 Downing Street and set off on the business of running the country. Cameras flashed.

The new coalition partners said their partnership is united by common purpose and will survive for a full five-year term.

Clegg said "this is a government that will last" and Cameron said his Conservatives and Clegg's Liberal Democrats had signed up to a five-year deal, saying "we have a shared agenda and a shared resolve to tackle the challenges our country faces."

CBS News correspondent Elizabeth Palmer reports that, although Cameron and Clegg were bitter opponents throught the campaign, the coalition is one that stands a fighting chance as both men are actually considered centrists.

Cameron, is not a conservative in the American sense - he's in favor of gay rights, pushes a green agenda and backs the well-established British welfare state.

The alliance was necessary because no party won a majority of parliamentary seats in last week's national vote. Britons struggling to make ends meet during a punishing recession have been enraged at politicians of all stripes after a damaging lawmakers' expense scandal last year.

It did, however, win the immediate praise of the governor of the Bank of England, who lauded the coalition's deficit-cutting plan Wednesday morning as "strong and powerful."

Governor Mervyn King told reporters he had seen details of the plans agreed by Cameron's government with its Liberal Democrat coalition partners. He said he was "very pleased that there is a very clear and binding commitment to accelerate the reduction in the deficit over the lifetime of the parliament and to introduce additional measures this fiscal year to demonstrate the importance of getting to grips with that before running the risk of an adverse market reaction."

One of the first calls of congratulation to the new prime minister came from President Obama, an acknowledgment of Britain's most important bilateral relationship. Obama invited Cameron to visit Washington this summer.

Both Cameron and Clegg have acknowledged that Labour - in power for the last 13 years - was too closely tied to Washington's interests. Both men back the Afghanistan mission, but Cameron hopes to withdraw British troops within five years. Clegg has said he's uneasy at a rising death toll. Leaner coffers may also mean less money to enter foreign-led military operations.

Relations with European neighbors could also become problematic. Cameron's party is deeply skeptical over cooperation in Europe and has withdrawn from an alliance with the parties of Germany's Angela Merkel and France's Nicolas Sarkozy. Clegg, once a member of the European parliament, has long been pro-European.

Once described as sandal-wearing hippie academics, Clegg's Liberal Democrats emerge from the political fringe to the top rung of government. Among the most visible will be Vince Cable, who will take an as yet unspecified post in charge of Britain's banks, the BBC reported.

Labour, meanwhile, took steps to regroup, with the maneuvering under way for the job of party leader after former Prime Minister Gordon Brown resigned Tuesday. David Miliband, the former foreign secretary, has emerged as a top candidate and has earned the backing of another early favorite, former Home Secretary Alan Johnson.

The agreement between the Conservatives and the Liberal Democrats, reached over five tense days of negotiation, delivered Britain's first coalition government since World War II.

Cameron and Clegg agreed to a pact after the Conservative Party won the most seats in Britain's May 6 election, but fell short of winning a majority of seats in Parliament.

The coalition has already agreed on a five-year, fixed-term Parliament - the first time Britain has had the date of its next election decided in advance. Both sides have made compromise, and Cameron has promised Clegg a referendum on his key issue: reform of Britain's electoral system aimed at creating a more proportional system.

"Nick Clegg and I are both political leaders who want to put aside party differences and work hard for the common good and for the national interest," Cameron said Tuesday.