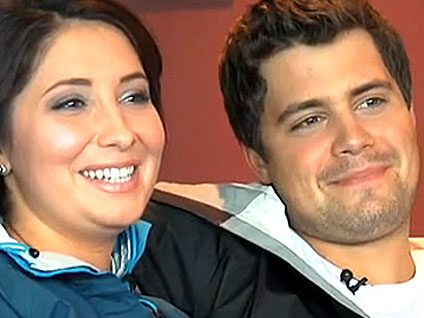 NEW YORK (CBS) Levi Johnston gets red in the face; and for good reason.

Johnston is reeling from the sparks of love as he is seen in a video clip with his soon-to-be wife and mother of his 18-month-old son Tripp, Bristol Palin. The 20-year-old reveals in a recent short film how he "popped the question" to Palin, 19.

In a video from Us Weekly magazine, the couple talk about their engagement from their Anchorage, Alaska, condo. The magazine reports that Johnston, whose relationship with the Palin family had been strained since he and Bristol called off their first engagement last year, also vows that he will now be there for his son Tripp.

"I've missed out on a lot of his life, and I can't get that back," he tells Us Weekly in the clip. "Seeing him walk or crawl for the first time, or his first word ... I missed all that. More importantly, I am here now, and I am going to make it right."

Says Bristol, "It just feels right to be family."