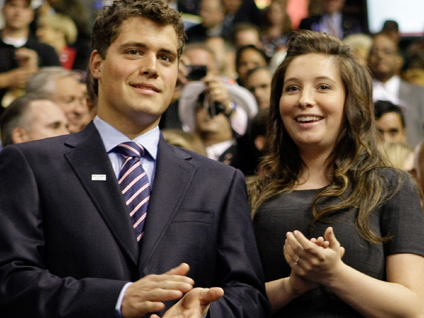 Bristol Palin and Levi Johnston say they're engaged once again - and they haven't told her parents yet.

Palin, the daughter of 2008 vice-presidential candidate and former Alaska governor Sarah Palin, is featured on the cover of Us Weekly with Johnston, holding their son, 18-month-old Tripp.

Bristol Palin tells the magazine that she finds the idea of telling her mother "intimidating and scary."

Us Weekly editor Caroline Schaefer said on NBC's "Today" show that Palin approached the magazine looking for a platform to explain why she got engaged.

Palin and Johnston say they reconnected while working out a custody plan and became engaged two weeks ago. Schaefer says they hope to get married within six weeks in a small ceremony in Alaska.

The Palins released a statement on the "Today" show Wednesday morning, saying, "Bristol at 19 is now a young adult. We obviously want what's best for our children. Bristol believes in redemption and forgiveness to a degree most of us struggle to put in practice in our daily lives."

On July 6, Johnston released a statement to People magazine apologizing for saying things that were "not completely true" about the Palin family in the wake of his breakup with Bristol. The two broke off their first engagement in March 2009.

"Last year, after Bristol and I broke up, I was unhappy and a little angry. Unfortunately, against my better judgment, I publicly said things about the Palins that were not completely true. I have already privately apologized to Todd and Sarah. Since my statements were public, I owe it to the Palins to publicly apologize."

"So to the Palin family in general and to Sarah Palin in particular, please accept my regrets and forgive my youthful indiscretion," his statement continued. "I hope one day to restore your trust."

Bristol also released a statement to the magazine, saying, "Part of co-parenting is creating healthy and honest relationships between the parents. Tripp one day needs to know the truth and needs to know that even if a mistake is made the honorable thing to do is to own up to it."