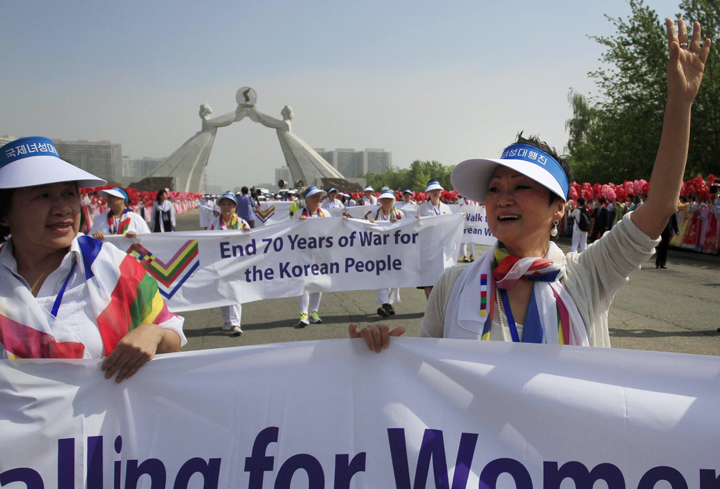 SEOUL -- International women activists including Gloria Steinem and two Nobel Peace laureates on Sunday were denied an attempt to walk across the Demilitarized Zone dividing North and South Korea, but were allowed to cross by bus and complete what one of them called a landmark peace event.

The activists' objective was to shine a light on the need for better relations between the two nations and to push for a formal peace treaty, which was never signed after the Korean War.

Controversy surrounded the border crossing and peace rally. Protesters in Seoul claimed that the activists, who call themselves WomenCrossDMZ, have been too supportive of the government of Kim Jong-un by not pointing out human rights abuses in North Korea.

Complicating the event, the governments of North and South Korea disagreed on which of the two active border crossings the women should take. The group wanted to walk across the iconic Panmunjom crossing, where the 1953 Armistice ending the war was signed. Today it is the Joint Security Area of the U.N. Command.

The South Korean government rejected that, telling the organizers that they would have to cross at the Kaesong checkpoint, according to organizer Colleen Baik. The government claimed crossing in Panmunjom would be a violation of the Armistice. The Panmunjom facility does not have an immigration checkpoint, military officers at the DMZ told CBS News.

U.N. Secretary General Ban Ki-moon had intended to visit the Kaesong Industrial Complex, an area north of the DMZ where South Korean businesses employ North Korean nationals, until the trip was abruptly cancelled Thursday by officials in Pyongyang. It would have been the first time a U.N. Secretary General had visited the complex and the first trip to North Korea for a U.N. leader in 22 years.

In an interview Thursday with CBS News, the South Korean Ban gave a wholehearted endorsement to the activists.

"When this decision was endorsed by both South and North Korean authorities, I thought that that will provide a very good opportunity to help promote reconciliation between the two and help even reduce tensions between the two parts of Korea," the Secretary General said. "I sincerely hope that they will be able to proceed with their plans."

The group is made up of 30 women from 15 countries, including two Nobel Peace Prize laureates: Mairead Maguire, who shared the 1976 Nobel prize for her work toward ending the conflict in Northern Ireland, and Leymah Gbowee, who was recognized in 2011 for her role in the Liberian peace movement.

"We bought one-way tickets for Pyongyang not even knowing whether we would need to fly back to Beijing," Gbowee told CBS News. "Not only have we received the blessing for our historic crossing, we've gotten both Korean governments to communicate. That is a success."

A diplomat traveling with the Secretary told CBS News that the behind-the-scenes tension -- the squabbling between Seoul and Pyongyang about where the women would cross, criticism in the U.S. and in South Korea that the women were being used for propaganda by the North, and the resistance of South Korea to let the event happen -- illustrates how difficult it will be to reconcile the bigger differences between the two nations.