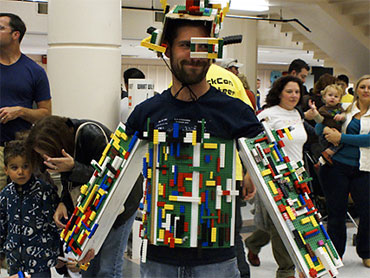 This story was written by CNET's Ina Fried

In one corner of the exhibition hall, hands sift through bins searching for rare pieces missing from vast collections. In another area, a giant Lego person rides in circles atop a brick rendition of the Segway scooter. In between are myriad Lego creations large and small.

It was all part of BrickCon 2009--a four-day festival devoted to Lego, the Danish creation that celebrated its 50th birthday last year.

On display were pieces of Lego art, replicas of real cities and even visions of an apocalyptic future crafted from the signature blocks. For those seeking to build on expansive collections, vendors offered rare and discontinued Lego sets as well as bulk bins where enthusiasts could hunt for plastic treasure.

Also for sale were all manner of trinkets, including T-shirts with sayings like "Got bricks?" along with jewelry and working lamps crafted from Legos.

Among those displaying their projects was Micah Berkoff, a 15-year-old who has already amassed more than 200,000 pieces in his collection. "After it overtook my regular room, I had to move it to a special Lego room," Berkoff said.

Berkoff brought a steampunk vehicle he created back in January to show at the convention, but was a little worried that he would be overlooked because he wasn't an adult like most of those who attended the main part of the conference. "I thought I would have been ignored," Berkoff said. "I thought this would be a conference for AFOLs."

For those not up to speed on Lego lingo, that means an Adult Fan of Lego. Indeed, while the public convention hall was open to all ages for several hours on Saturday and Sunday, the four-day private convention was geared primarily to adults (though teens could participate if a parent did as well).

And there were plenty of AFOLs. One of them was Thomas Mueller, a 33-year-old German native who created a moving Segway scooter out of Legos topped with a giant re-creation of the Lego person. Mueller had a remote-control version of his Segway at last year's BrickCon, but that required his constant attention. This year, he decided instead to have the Segway follow a lined track so that he would have more time to socialize with other convention-goers. With a fresh set of batteries, Mueller said the scooter can now run for four hours unattended.

Mueller actually didn't set out to build a Segway at all. He was building a weapons platform, but when he showed the partially built creation to friends, they all thought it resembled the pricey scooter. Rather than fight it, he decided to tweak his creation to work like the scooter.

When the doors finally opened to the public on Saturday, the line stretched for more than three blocks.

Among those who toured the event during the public time on Saturday was M3 Sweatt, who works in Microsoft's Windows unit, along with his two boys, CJ and Max. Sweatt said it took 45 minutes to get inside the event, but added that it was worth the wait.

Among the things that attendees could try out was a new version of software from Lego that lets people design their own Lego creation online. If people like their creation enough, they can order the real pieces required to build it direct from Lego. The latest version of the Lego Digital Designer software, due out soon, also lets users create a custom-designed box for their project.

BrickCon began in 2002 in just a small room at Seattle Center but has grown almost every year and now fills the giant 35,000-square-foot exhibition hall.

While BrickCon was probably the most interesting event in Seattle Center for the geek set (aside from the year-round science fiction museum), for me it was a trifecta on Saturday as I also got to enjoy the Northwest Tea Festival, as well as the opening day of the Sesame Street Presents The Body exhibit at The Children's Museum, Seattle. That last exhibit, which I particularly enjoyed, is in Seattle through January and then travels to Buffalo, N.Y., as part of its ongoing tour.