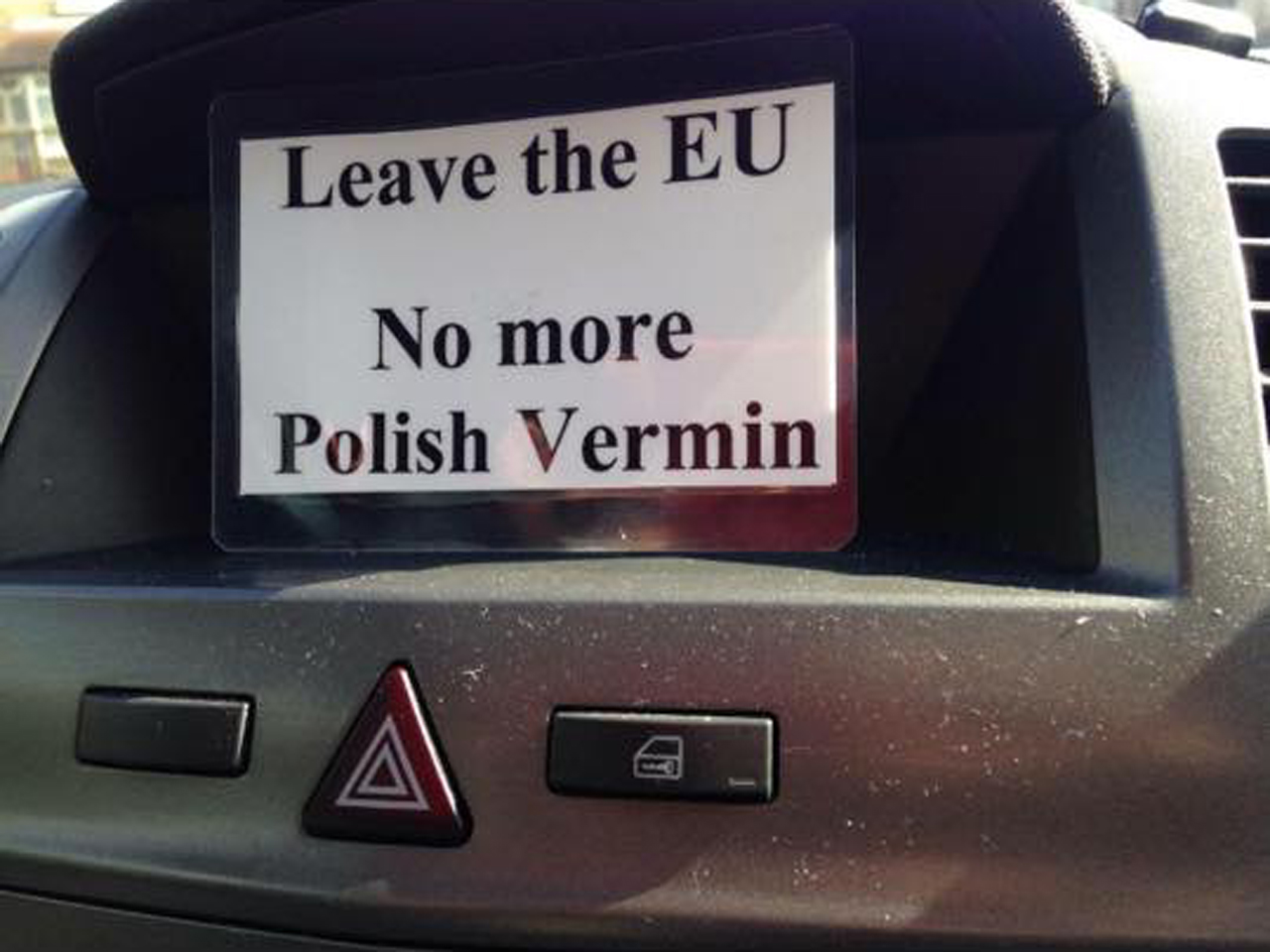 LONDON -- Turkish tourists are heckled in the heart of London. An Eastern European family in Rugby finds dog excrement shoved through its mailbox. A Polish teenager in Gloucestershire is taunted with threats of deportation at her high school.

In the aftermath of the June 23 vote to leave the European Union, Britain has seen a surge in xenophobia expressed in taunts, threats and worse. For many, foreign- and native-born, the U.K. has suddenly become a much scarier place.

"Before Friday we lived in a tolerant society," said Oana Gorcea, a 32-year-old Romanian who has been in Britain since she was a teenager. "I've been here 13 years, but I've never felt like I had to hide where I came from. But from Friday, things completely changed."

Gorcea, who works for a multinational company in Rugby, about 85 miles northwest of London, told The Associated Press that her street was being patrolled by "English commandos who walk around and try to intimidate non-white, non-English people." The talk of the neighborhood was the dog feces shoved through a local immigrant family's mailbox.

Gorcea's story and others like it have been echoing across social media. Eastern Europeans, Muslims -- even Americans and Germans -- have reported acts of intimidation and harassment. Victims describe an emboldened, angry fringe emerging to crow over the vote; a T-shirt sported by a man at an Armed Forces Day parade in the working class London borough of Havering over the weekend seemed to sum up the new attitude:

British reporters have also seen the resurgence. Adam Boulton, an anchor for Sky News, said on Twitter that he and his family had witnessed three separate incidents of abuse aimed at Europeans over the weekend. Channel Four's Ciaran Jenkins said that within a five-minute span in the northern England town of Barnsley, three people had shouted "Send them home!" BBC reporter Sima Kotecha said she was in "utter shock" after having returned home to the southern town of Basingstoke and been abused with a racial slur she hadn't heard "since the '80s."

The incidents continued Tuesday a few blocks from Parliament, where a group of white British men wearing shirts calling for the "repatriation" of immigrants started shouting at a Turkish family visiting the capital's landmarks.

"We came to see family and to show our children some of the tourist sites," Adalet Abdullatif, 28, from Istanbul, told The Associated Press. "All of a sudden, these men come out of nowhere, shouting at us and telling us to go home. We thought they were going to attack us. It's frightening for us and for our children."

Police said there had been several cases of vandalism and xenophobic graffiti scrawled on London buildings overnight. Miqdaad Versi, assistant secretary-general of the Muslim Council of Britain, said "hundreds of hate crimes" had been reported across the country. On Monday, the National Police Chiefs' Council said there had been a 57 percent rise in hate-crime complaints in the past four days, compared with the same period last month.

Those who championed the campaign to pull Britain from the EU have condemned the attacks.

"I've never, ever, ever encouraged or condoned behavior like that, and I never, ever would," said United Kingdom Independence Party head Nigel Farage, a leader in the campaign for a British exit from the EU, popularly known as Brexit.

Other politicians didn't buy it.

"The leaders of the Brexit campaign have engendered an atmosphere where some people believe it is open season now for racism and xenophobia," said lawmaker Harriet Harman, a former leader of the opposition Labour Party.

A group that monitors reported incidents of harassment or violence against Muslims in Britain also sees a link.

"The Brexit vote seems to have given courage to some with deeply prejudicial and bigoted views that they can air them and target them at predominantly Muslim women and visibly different settled communities," Fiyaz Mughal, Founder and Director of the group TellMAMA (Measuring Anti-Muslim Attacks).

TellMAMA is an online portal where British Muslims can report incidents of abuse or attacks. The group, which works with police to monitor such incidents, released a report on Wednesday showing a "326% increase in street based anti-Muslim incidents" in Britain during 2015. A majority of the abuse was aimed at Muslim women wearing traditional Islamic head scarves or burqas.

"This is unacceptable and further polarizing and especially worrying when our 2015 annual findings are showing some young white males between the ages of 13-18 being radicalised by extremist far right narratives," said Mughal.

For the victims, the link between the referendum and the abuse is clear. Immigration was a key issue in the campaign, with Farage posing in front of a massive, truck-drawn poster carrying a photograph of hundreds of swarthy migrants under the words "Breaking Point." Many "leave" voters cited the influx of foreigners as a top concern.

"Just because of one referendum ... it's coming out like woodworms," said Julie Sauter Daoud, a French-German national who has lived in Britain most of her life. On Sunday, she said two men overtook her car shouting, "Go home, you (expletive) German."

She said the verbal attack, which happened while she was driving on a residential street in the northern city of Sheffield, left her so shaken that she was scared to speak French to her youngest child at the supermarket.

"It's terribly sickening," she said in a telephone interview. "The first time ever in my life. Ever." She paused for a second. "Probably not the last time now."

The 44-year-old's story is one of hundreds on a Facebook group called "Worrying Signs," which is gathering examples of the recent surge in intolerance. By Tuesday, the site contained stories and photos of sinister graffiti and broken windows. Although the AP could not independently confirm the stories, it did speak with several of those behind them.

Polish-British national Natalia Nicholls told AP her 14-year-old sister was taunted by boys at her high school in the Cotswolds region of England who boasted that "now we can get rid of the Polish and the blacks." Corinne Abrahams, 24, said she was returning from a music festival when she nearly got into a fight with an inebriated man yelling anti-foreigner epithets on the London subway. An American said she was recently accosted by people calling her a "Yankee (expletive)" in a parking lot.

Prime Minister David Cameron, in his first appearance before lawmakers since the vote, sought to reassure Europeans and other ethnic minorities living in Britain that they would be protected."

"Let's remember these people have come here and made a wonderful contribution to our country," he said. "We will not stand for hate crime or these kinds of attacks. They must be stamped out."