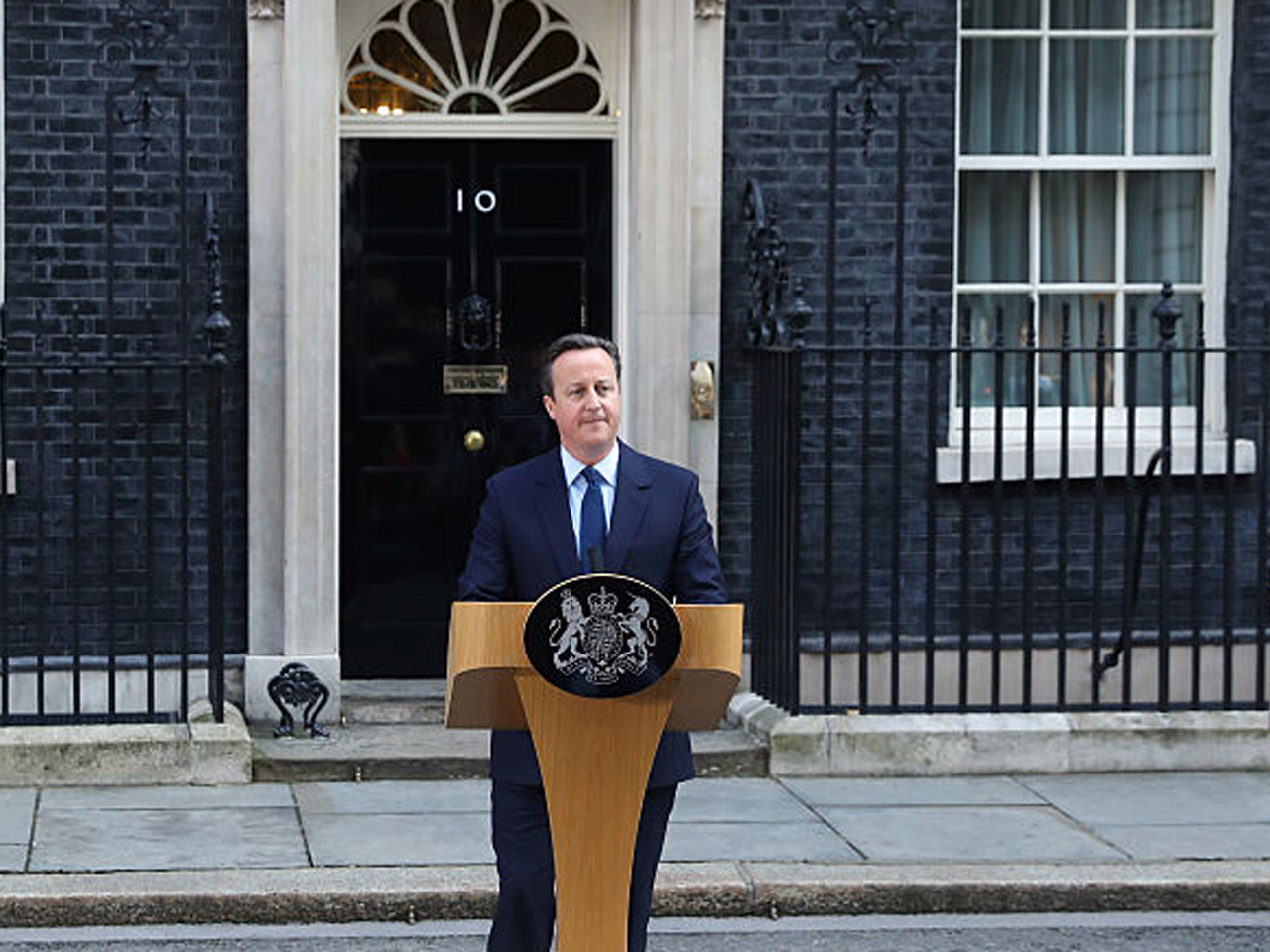 LONDON -- After a hard-fought debate, voters in Britain decided the U.K. should leave the European Union in a historic referendum that toppled a prime minister and opened up a world of uncertainty.

With all the votes counted, the "Leave" campaign clinched victory with a more than 1 million-vote advantage. The vote was 52 percent to 48 percent in favor of leaving the union.

Prime Minister David Cameron, who brought the referendum to bear as a campaign promise and then fought hard for the Remain side, said outside his official residence on Friday that the result must be respected and that he was "proud," in spite of his loss, of the British democracy.

But as CBS News correspondent Mark Phillips reports, it would be hard to overstate the shock and the consequences of the vote -- and not just in Britain, nor just in Europe.

Cameron admited defeat, saying he would step down as Prime Minister within three months. In the U.K. it is the political party that leads the government by election, not the individual. Cameron's Conservative Party will now chose a new leader from among its ranks to take over the nation's top job. Pro-Brexit frontman Boris Johnson, the former London mayor, is one of the favorites to take over the premiership.

The result -- which took even advocates by surprise -- is expected to have a dramatic impact on the global economy, and could end up changing the borders of the United Kingdom itself. Britain is a union of four nations -- England, Scotland, Wales and Northern Ireland.

Nationalists in Scotland and Northern Ireland, where residents voted decisively to remain in the EU, quickly renewed calls for separation from the United Kingdom.

It could also fuel calls for referendums on leaving the EU in other members states, leaving the future of the union that rose out of the ashes of World War II in doubt.

In Northern Ireland, the leader of nationalist party Sinn Fein said the British government had "forfeited any mandate to represent the economic or political interests" of that country.

Scottish leader Nicola Sturgeon said her country cast an "unequivocal" vote to remain in the European Union -- a result that necessitated her putting into motion the legislative mechanisms to prepare for a new referendum on Scottish independence from the U.K.

"The vote here makes clear that the people of Scotland see their future as part of the European Union," she said.

The world's financial markets reacted immediately, diving on Friday as word of the so-called "Brexit" rolled in.

The British pound plummeted more than 10 percent in six hours while the yen surged nearly 4 percent to the U.S. dollar as investors seeking safety snapped up the Japanese currency.

The pound initially soared as polls closed and two opinion surveys put the Remain camp ahead and two leading supporters of the Leave campaign said it appeared the pro-EU side had won. But it then suffered its biggest drop in decades, plummeting from about $1.50 to $1.34 as the actual results became clear.

Cameron had said he would immediately notify the EU of Britain's intent to exit the union. Under EU rules, that will begin a maximum two-year countdown until the U.K.'s final withdrawal.

British leaders will spend those years, and likely more, renegotiating trade deals with the EU and individual countries elsewhere that are currently covered under EU membership. During the withdrawal process, Britian will remain part of the Union.

Economists said the U.K. vote to withdraw from the EU was likely to immediately hurt the British economy.

"Even supporters of the 'Leave' campaign have acknowledged that there will be a near-term hit to the economy from heightened uncertainty affecting business and consumer activity, as well as from financial market turmoil," said Howard Archer, chief U.K. and European economist with IHS, in a note.

The first results, from England's working-class northeast, were a smaller-than-expected Remain win in Newcastle and a bigger-than-expected Leave vote in nearby Sunderland. The Leave side also outperformed expectations in other areas of England, though Remain appeared to have won decisively in Scotland.

The vote to leave the EU could destabilize the 28-nation trading bloc, created from the ashes of World War II to keep the peace in Europe politically and economically for years.

President Obama, who urged Britons strongly to vote to remain in the EU, said the U.K. would lose the priority trading status with the U.S. that it enjoys as part of the bloc.

The White House released a statement early Friday morning saying Mr. Obama had been briefed on the referendum results, and would likely "have an opportunity to speak to Prime Minister Cameron over the course of the next day."

As the polls closed Thursday, U.K. Independence Party leader Nigel Farage set a downbeat tone for the supporters of a British exit -- or Brexit -- from the EU, telling Sky News television "it looks like 'remain' will edge it" in the referendum, sending the pound to a 2016 peak of $1.50.

But he walked back those comments later, telling reporters at a "leave" party in central London that "maybe just under half, maybe just over half of the country" had voted to pull Britain out of the EU.

The most recent polls had suggested "remain" had a narrow lead.

Pollster Ipsos MORI said a survey conducted on Wednesday and Thursday suggested the "remain" side would win Britain's EU referendum by a margin of 54 percent to 46 percent.

Earlier Thursday, the firm had released a poll that indicated a 52-48 victory for "remain." That phone poll of 1,592 people had a margin of error of plus or minus three percentage points. But the firm's chief executive, Ben Page, said continued polling on Thursday suggested a bigger swing to "remain" that gave the 54-46 result.

Much was riding on the outcome. The U.K. is the second-largest economy in the EU, and experts fear its withdrawal from the 28-country trading bloc could smite financial markets around the world.

Over the longer term, Brexit may also destabilize the EU, causing global political and economic turmoil that could reached the United States, according to Aaron Klein, a fellow of economic studies at Brookings, and his colleague DJ Nordquist.

"Our economy does not need additional global headwinds," they wrote in a research note. "Global weakness and financial market uncertainty is not the recipe for stronger economic growth."

To varying degrees, Brits have been debating their membership in the EU ever since the U.K. joined the old Common Market in the early 1970s. But the more immediate reason for the vote was that Prime Minister David Cameron, bowing to pressure from his own Conservative party and the right-wing U.K. Independence Party, promised to hold a Brexit referendum in the run-up to his 2015 reelection campaign.

Cameron in recent weeks had warned that exiting the E.U. would devastate the British economy, characterizing such a move as a "leap in the dark." His government predicted the U.K. would plunge into a year-long recession and lose 500,000 jobs.

Numerous experts said leaving the union would do everything from undermine the competitiveness of British products in Europe, the U.K.'s biggest trading partner, to force million of farmers off the land as they lose access to EU subsidies. London, home to roughly half of the world's biggest financial services companies, also could have lost its status as Europe's most important banking hub.

But pro-Brexit forces, such as former London Mayor Boris Johnson, said the long-term impact would be much more modest, pointing to wealthy countries such as Norway and Switzerland that manage to function well outside the EU. More broadly, such critics argued that leaving the EU would unshackle Britain from what they see as a sinking ship, while relieving consumers and business of the regulatory and other costs of belonging to the union.