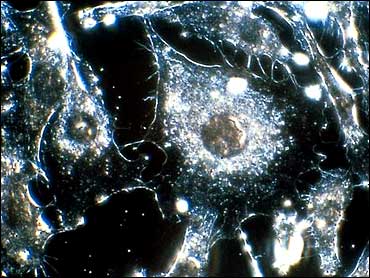 Researchers are using nanoparticles to create a material sensitive enough to analyze a person's breath in real time and detect indicators of cancer, diabetes, and other illnesses.

Scientists at Purdue University and the National Institute of Standards and Technology said today that even though diagnostic breath-analysis tools have been around for several decades, this is the first time a material has been developed that's sensitive enough to deliver on-the-spot results.

"We are talking about creating an inexpensive, rapid way of collecting diagnostic information about a patient," Carlos Martinez, an assistant professor of materials engineering at Purdue, said in the statement. "It might say, '... you are metabolizing a specific compound indicative of this type of cancer,' and then additional, more complex tests could be conducted to confirm the diagnosis."

These sorts of breath-analysis tools detect changes in electrical resistance or conductance as a gas--i.e., the patient's breath--passes over sensors. The changes can point to the presence of "biomarkers," substances that serve as red flags for various ailments and physical conditions.

The Purdue and NIST researchers basically produced a more effective sensor by increasing its surface area. They replaced a flat surface with a material created using a coating of metal-oxide nanoparticles, which introduced lots of nooks and crannies, and made for an extremely porous metal-oxide film.

They then used the material to detect acetone, a biomarker for diabetes, in a gas that mimicked a person's breath. They were quickly able, they said, to pick up on biomarkers in the parts per billion to parts per million range--at least 100 times better than earlier breath-analysis tools.

"People have been working in this area for about 30 years but have not been able to detect low enough concentrations in real time," Martinez said. "We solved that problem with the materials we developed, and we are now focusing on how to be very specific, how to distinguish particular biomarkers."

Tools like this for real-world use are likely a decade away, if not longer, in part because precise manufacturing standards haven't been developed for the new approach.

"The fact that we were able to do this in real time is a big step in the right direction," Martinez said.