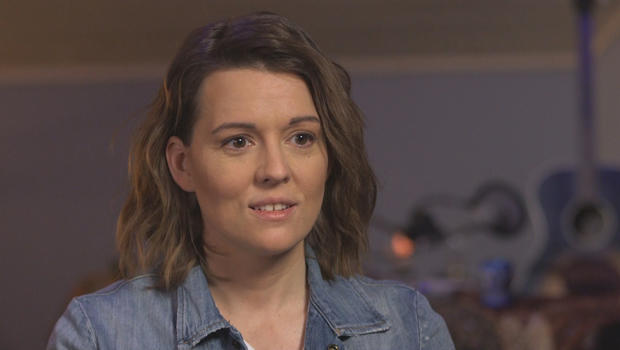 By the time she took the stage at this year's Grammys, to perform "The Joke," Brandi Carlile had already won three awards out of the six she was nominated for, for her album "By The Way, I Forgive You." "The Joke," an anthem for outcasts, brought the audience to their feet.

She'd spent the days before planning things like what to wear, but she'd been preparing for her time in the spotlight her whole life.  "I mean, it feels like a really big moment to me, it feels really big," she said before the show.

She's had lots of big moments lately, including her sold-out music festival in Mexico, where fans knew every word to her songs.

Truth is, Carlile may be the most popular musician you've never heard of … the one all the cool kids already adore. President Obama put her on his 2018 favorites playlist, and Bradley Cooper put her in his movie, "A Star Is Born."

Correspondent Tracy Smith said, "You seem to be every celebrity's favorite musician."

"Really? Everybody loves an underdog!" she laughed.

It's a scrappy status she's quite proud of.  The 37-year-old Carlile and her band – identical twins Tim and Phil Hanseroth – have been building a name for themselves for more than a decade. Not a household name, mind you, but that's OK. "We don't have the mass appeal or mainstream assimilation that some of these other artists that we're nominated alongside do. And they deserve it, too, you know?"

Smith asked, "Do you care?"

Her life, when she's not out touring (or collecting Grammys), is on the rural outskirts of Seattle.

She doesn't ever think of moving: "Oh, hell no, no way. And everything that I do make, I put it back into the house."

Carlile bought this farm when she was 21, and she's been perfecting it, by hand, ever since. Her idea of a splurge: An excavator, so she and the twins can dig holes in the yard.

When Carlile met the Hanseroth twins on the Seattle music scene about 14 years ago, the three of them immediately clicked – same musical taste, same sense of humor. But the twins had day jobs; Brandi did not.

"At the end of the night, we'd play these gigs, these four-hour gigs, and they would stuff their money back into my guitar case," Carlile said.

As they each started families of their own, they've only gotten closer.  Phil married Brandi's sister, Tiffany. And when they're not on the road, the twins and their families spend most nights at Brandi's. "I know it's amazing," she said. "I take it for granted sometimes, but I know it's unique. My friends that are in bands are like, 'You're crazy. It's the most unhealthy thing in your life!'"

Still, life's little luxuries are something Carlile never takes for granted. Growing up, she, her sister and brother and parents all lived in a single wide trailer in rural Washington. They were, she said, very, very poor: "I'm never gonna know how to be anything other than poor, you know? It's in me. It'll always be in me."

Her mom sang in a country band, and as a, Carlile did, too. "The highlight of my life was getting taken into bars, from bar to bar, at seven, eight, nine years old, and singing with my mom's band," she said. "That was just it. That's what I was gonna do. Period."

She dropped out of school, taught herself guitar and piano, and started playing pizza joints and fish shacks – any place that would have her. By the time she met the twins, Brandi Carlile's name was well-known on locally, so they kept it as the name of the band. They decided early on they'd split all the credit, and the money, three ways.

She said, "We did sit down and say, you know, 'Let's not do what other bands do and start talking about who contributes what.' Because life is gonna ebb and flow. And sometimes, somebody else might put in more work than another person. So, let's just split everything we ever make three ways, no questions asked. And what'll win, in the end, is the music."

The title song was everywhere, including in a car commercial which came with a six-figure paycheck, but the band didn't divvy up that money three ways. Instead, they gave it all away. They started the Looking Out Foundation that gives to causes ranging from the environment to children displaced by war.

Carlile said, "In some ways, I think it's as important as anything we've ever done, musically."

Brandi's wife, Catherine, runs the charity. They have two daughters, baby Elijah, and four-year-old Evangeline, who made a sticker-covered poster celebrating Mom's Grammy nods. "I think, probably, Cardi B has one of those in her house, too," Brandi said.

How fitting that this song is her new hit, where the underdog ultimately comes out on top. Brandi Carlile's seen how it ends … and she's ready.

She said, "I don't know that I would have been ready for this in my twenties. or even five years ago. Without sounding Pollyanna or overly earnest, I'm filled with joy and gratitude right now."

To hear Brandi Carlile perform "Party of One" (featuring Sam Smith) click on the video player below.