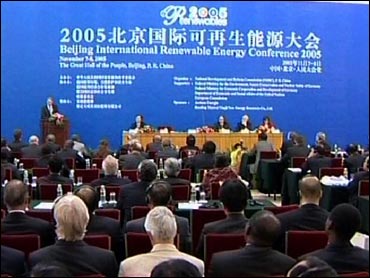 Chinese President Hu Jintao and U.S. and European officials called Monday for a sharp rise in the world's use of solar and other nonpolluting power sources as they opened an international meeting on renewable energy.

Some 1,200 delegates from 80 countries joined Chinese leaders at the Great Hall of the People, the seat of China's legislature, to discuss using solar power, wind energy and hydropower instead of coal and oil.

"Strengthening the development and use of renewable energies is a must for us to address the increasingly serious energy and environmental issues," Hu said in a statement that was read to the conference by Vice Premier Zeng Peiyan.

China, the world's second-biggest producer of greenhouse gases after the United States, has promoted cleaner and renewable energy in hopes of reducing air pollution from its surging fossil fuel use and the potential security risks of growing dependence on imported oil.

The government says China relies on renewable energy for 7 percent of its needs but wants to raise that to 15 percent by 2020.

"With this Beijing conference, one of the world's boom regions is sending an important signal for sustainable development worldwide and a signal for global climate protection," said Jurgen Trittin, Germany's environment minister.

Worldwide, hydroelectric dams and other renewable sources account for 4 percent of power generation, with a total generating capacity of 160 gigawatts, according to Trittin. A terawatt is 1,000 gigawatts.

By 2050, that generating capacity is expected to grow by more than eight times to 1 terawatt, said Dan Arvizu, director of the U.S. Energy Department's National Renewable Energy Laboratory.

"But what we need is 20 terawatts," Arvizu said in a speech at the two-day conference. "We all need to do much more than any of us is currently doing."

U.N. Secretary-General Kofi Annan, in a statement read out at the conference, cited the potential economic benefits of renewable energy for poorer countries.

China is trying to promote cleaner energy even as it constructs dozens of new power plants to meet the demands of a booming economy that is expected to grow by 9 percent this year.

Areas throughout China suffer from chronic power shortages, prompting many cities to schedule blackouts in summer to reduce the strain on their generating stations.

"China attaches great importance to ... renewable energy and takes it as one of the most important instruments for promoting social and economic development," Hu's statement said.

The government says it plans to build 31 nuclear power plants by 2020 and is constructing clusters of windmills off several areas of its east coast.

In China, oil and inexpensive but dirty coal still account for most energy consumption.

"It is a pressing need for China's electricity sector to use renewable energy," said Zhou Dabing, president of China Guodian Corp., a government-owned power company.

"Compared to developed nations, we are lagging behind in terms of technical progress and our speed of progress," Zhou said.

Arvizu called China's target of obtaining 15 percent of its power from renewable sources by 2020 "pretty aggressive." But he said Beijing should consider setting an even higher target.

In Washington last week, the Bush administration put out a press release on the federal government's own increase in the use of renewable energy sources, a goal which was mandated in an executive order issued during the last year of the Clinton administration.

According to the Department of Energy, over 2.5 percent of the energy used by the federal government – the largest energy consumer in the nation – now comes from renewable sources, an increase of 1,000 percent from 1999, when that goal was set. The new goal, set in the Energy Policy Act of 2005, is 7.5 percent by the year 2013.