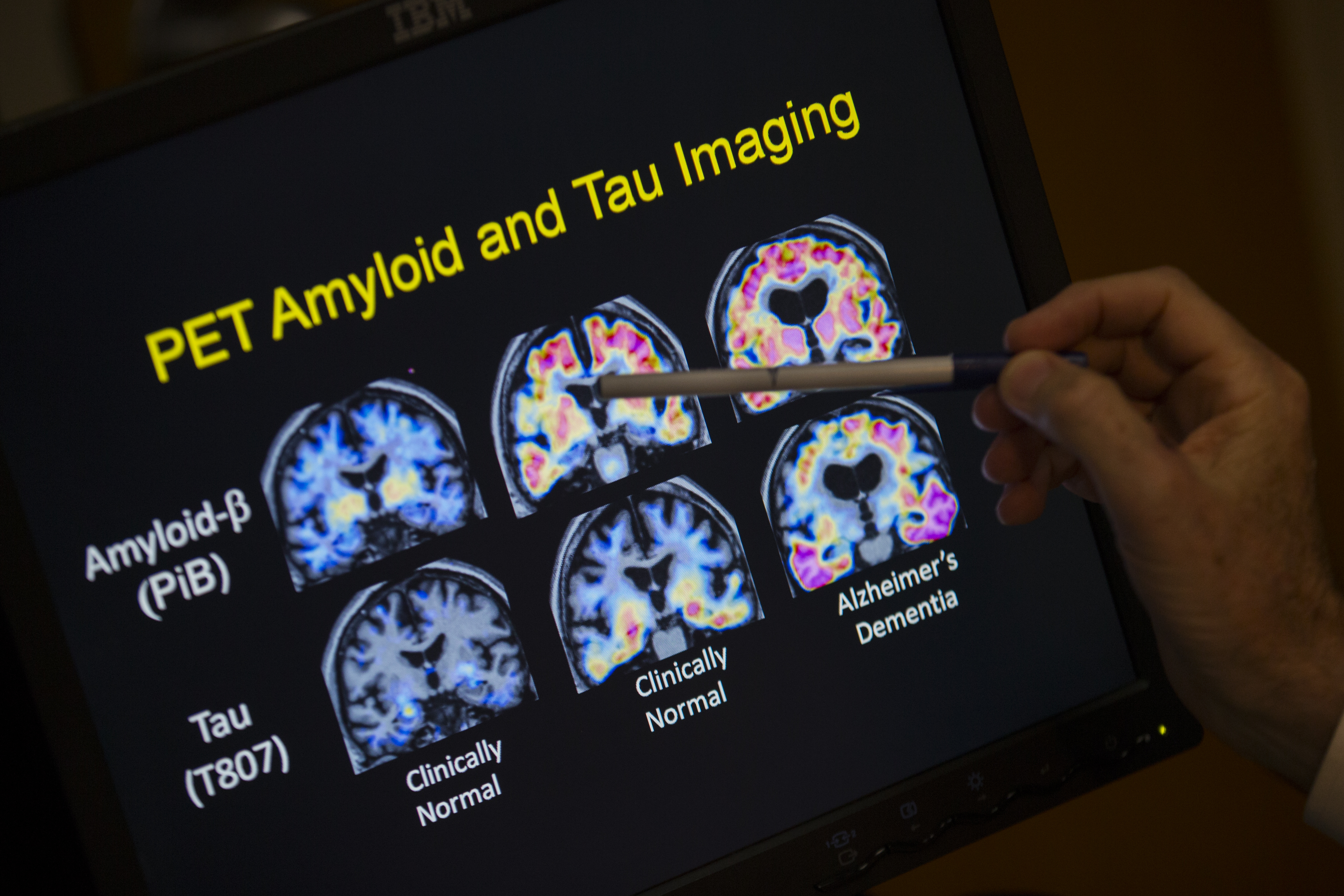 Scientists are peeking inside living brains to watch for the first time as a toxic duo of plaques and tangles interact to drive Alzheimer's disease -- and those tangles may predict early symptoms, a finding with implications for better treatments.

It's not clear exactly what causes Alzheimer's. Its best-known hallmark is the sticky amyloid that builds into plaques coating patients' brains, but people can harbor a lot of that gunk before losing memories.

"It's a location, location, location kind of business," said Dr. Beau Ances of Washington University in St. Louis, who led the work. The plaque "starts setting up the situation, and tau is almost the executioner."

The new study is very small and more research is required to confirm the findings. But it highlights the importance of developing drugs that could target both amyloid and tau buildup, something researchers hope one day could help healthy but at-risk people stave off the earliest symptoms of Alzheimer's.

"This is exactly the type of information we're going to need" for better treatments, said Alzheimer's Association chief science officer Maria Carrillo, who wasn't involved in the new study. "It's cool to see the utility of this new imaging technology actually being deployed and used."

About 5 million people in the U.S. are living with Alzheimer's, a number expected to more than double by 2050 as the population ages. Today's medications only temporarily ease symptoms, and finding new ones is complicated by the fact that Alzheimer's quietly ravages the brain a decade or two before symptoms appear.

Doctors have long known that many older adults harbor amyloid plaques that increase their risk of developing Alzheimer's but don't guarantee they'll get it. The latest theory: Amyloid sparks a smoldering risk while tau pushes patients over the edge.

Only recently have scientists developed a way to perform PET scans to see tau deposits like they can see amyloid buildup, so they can test that theory. Currently, the expensive scans are used only for research -- doctors don't know enough yet to use them for routine patient care.

Ances' team analyzed both amyloid and tau PET scans from 10 patients with mild Alzheimer's and 36 apparently healthy older adults. They compared patterns of amyloid and tau deposits with a battery of standard memory tests.

Sure enough, the Alzheimer's patients had a lot of amyloid in their brains, as did some healthy people who scored fine on the memory testing. Some cognitively normal people also had bits of tau deposits.

But tau tangles that clustered in the temporal lobe, a region linked to memory, most closely matched cognitive impairment on those memory tests, the researchers reported.

The findings suggest that while amyloid is an early sign of Alzheimer's risk and people can tolerate some tau tangles, the toxic tau spreading to the wrong spot is the "interaction to tip the person over," Ances said.

He plans to study larger groups of people to better understand that decline into full-blown Alzheimer's.

The approach "is very important, both to understand the basic disease process and in development of new therapies," said Dr. R. Scott Turner of Georgetown University. He wasn't involved in Wednesday's research but is using PET scans of amyloid and tau in a different study, to see if an experimental anti-amyloid drug protects against Alzheimer's.

A number of drugs that target amyloid build-up have failed in recent years; many researchers think the treatment wasn't started early enough, before patients showed symptoms. A handful of anti-tau drugs also are being developed.