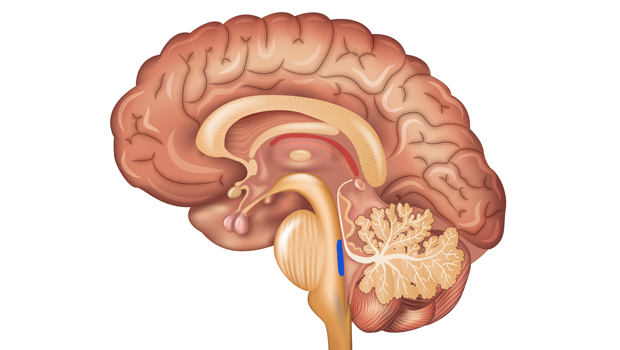 A small region deep in the brain might be "ground zero" for Alzheimer's disease, suggest the authors of a new review of scientific literature. It's still early to know for sure, though.

University of Southern California researchers said that the locus coeruleus -- a little blue area of the brain stem -- releases a chemical called norepinephrine that helps regulate heart rate, attention, memory, and cognition. It may also help prevent Alzheimer's symptoms by protecting brain cells, called neurons, from factors such as inflammation that may hasten the onset of dementia. They looked at mostly animal studies for their paper, published in Trends in Cognitive Sciences.

Study author Mara Mather, professor of gerontology and psychology at the University of Southern California Leonard Davis School of Gerontology, said in a statement that the locus coeruleus' high interconnectedness -- it sends branch-like axons throughout the brain to help regulate blood vessel activity -- may make it more susceptible to the effects of toxins and infections compared to other brain regions.

Mather said it's also the first brain region where tau pathology shows up, the protein that can lead to tangles in the brain, a hallmark of Alzheimer's disease.

"This isn't new research. This is scientists putting together a hypothesis based on existing research. What is new here isn't any particular finding as much as the idea that this may explain something we call the 'cognitive reserve effect,'" said Keith Fargo, director of scientific programs & outreach at the Alzheimer's Association.

The cognitive reserve effect is a catch-all term for certain behaviors that are linked to a person's risk of Alzheimer's he said. "If you have better education, you're less likely to get Alzheimer's. If you have a challenging occupation and retire later, you're less likely to develop dementia. Those things we've known for a long time but no one knows why. There isn't really a known mechanism, and there still isn't for certain, but this is a possible mechanism," Fargo said.

The idea is that when you have a novel stimulus to the brain -- you read a book, or do a crossword puzzle, or have a stimulating conversation, for example -- that in turn activates the locus coeruleus, causing it to produce norepinephrine.

"The idea here is that if you do that over the course of your life, you're giving your brain more protection," Fargo explained.

He said the authors are making the argument, based on prior research that shows tau shows up in the locus coeruleus, that that slow build-up of tau over a life causes some people to develop Alzheimer's.

Fargo said it's important to note that a lot of what they reference in this review article is from animal studies, and their theory should simply serve as a bridge to more studies in people.

"Right now we don't know what causes Alzheimer's disease. This is an example of how scientists begin to get to those answers. They do this basic science research in both humans and animals and look at the literature as a whole and put together these ideas. You don't get there unless you have these basic science studies. We need more research dollars in order to allow this kind of work to be done. This is an intermediate step between basic science and developing new therapies," Fargo added.