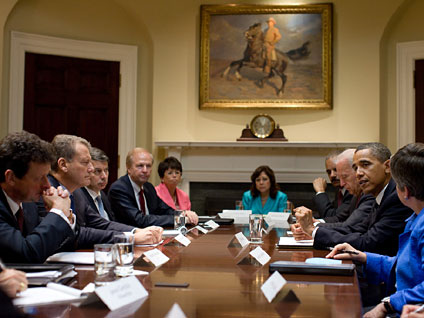 For the first time the Obama and BP teams faced off across a large conference room table in the Roosevelt Room. Both teams looked somber in the official White House photo.

After last night's lashing of BP by the president, and the beat down on BP America President Lamar McKay by the House Energy and Commerce environment subcommittee yesterday, there wasn't likely much left to say.

In a fait accompli, BP agreed to put $20 billion into an escrow fund as requested earlier this week by the Obama administration to deal with the economic and environmental damage.

"I am absolutely confident BP can meet its obligations to the Gulf coast and its people," Mr. Obama said during a statement following his meeting with BP executives. The announcement offered some actionable steps that were missing from his Oval Office speech.

BP Chairman Svanberg spoke following the president.  "We will live up to all our legitimate responsibilities," he said. We have agreed on a framework that will assure the American people people that we mean what we say."

He also announced that BP would not pay its quarterly dividend, which had become a point of contention.

"Notwithstanding BP's strong financial and asset position, the current circumstances require the Board to be prudent and it has therefore decided to cancel the previously declared first quarter dividend scheduled for payment on 21st June, and that no interim dividends will be declared in respect of the second and third quarters of 2010," BP said in a press statement.

The president shared a private conversation with BP's Svanberg, in which he emphasized that the chairman keep in mind the people in the Gulf coast when he talk to shareholders and other constituents.

"They are desperate," Mr. Obama said. He said Svanberg told him that he would keep them in mind. The president said that the standard he will apply to judge BP's efforts is whether people of Gulf are taken care of. "That's who we're doing this work for," the president said.

At this point, BP officials said they have 25 claims offices, with 120 people manning the phones. More than 51,000 claims have been filed to date, with about 25,000 payments totaling $69.7 million paid so far. The total payments is expected to rise to $85 million by the end of the week.

The fund will be administered by TARP special master and "pay czar" Ken Feinberg, who also coordinated the distribution of funds for people impacted by the September 11, 2001 terrorist attacks and the 2007 Virginia Tech shootings.

The  amount, which will fund over the next three and a half years, does not cap the amount that BP is responsible for paying out to claimants.

In addition, a $100 million dollar fund has been set up for unemployed oil rig workers.

According to BP's press statement, the escrow fund will be established along the following guidelines :

While the fund is building, BP's commitments will be assured by the setting aside of U.S. assets with a value of $20bn. The intention is that this level of assets will decline as cash contributions are made to the fund.

The fund will be available to satisfy legitimate claims including natural resource damages and state and local response costs. Fines and penalties will be excluded from the fund and paid separately. Payments from the fund will be made as they are adjudicated, whether by the Independent Claims Facility (ICF) referred to below, or by a court, or as agreed by BP.

The ICF will be administered by Ken Feinberg. The ICF will adjudicate on all Oil Pollution Act and tort claims excluding all federal and state claims.

Any money left in the fund once all legitimate claims have been resolved and paid will revert to BP.

The agreement is a start at the Obama administration gaining better control of the situation and addressing the economic troubles of those directly affected by the Gulf spill.

Restoring the Gulf coast to its former economic and environmental splendor, however, may take a lot more than $20 billion and BP's promise to live up to all its "legitimate" responsibilities.