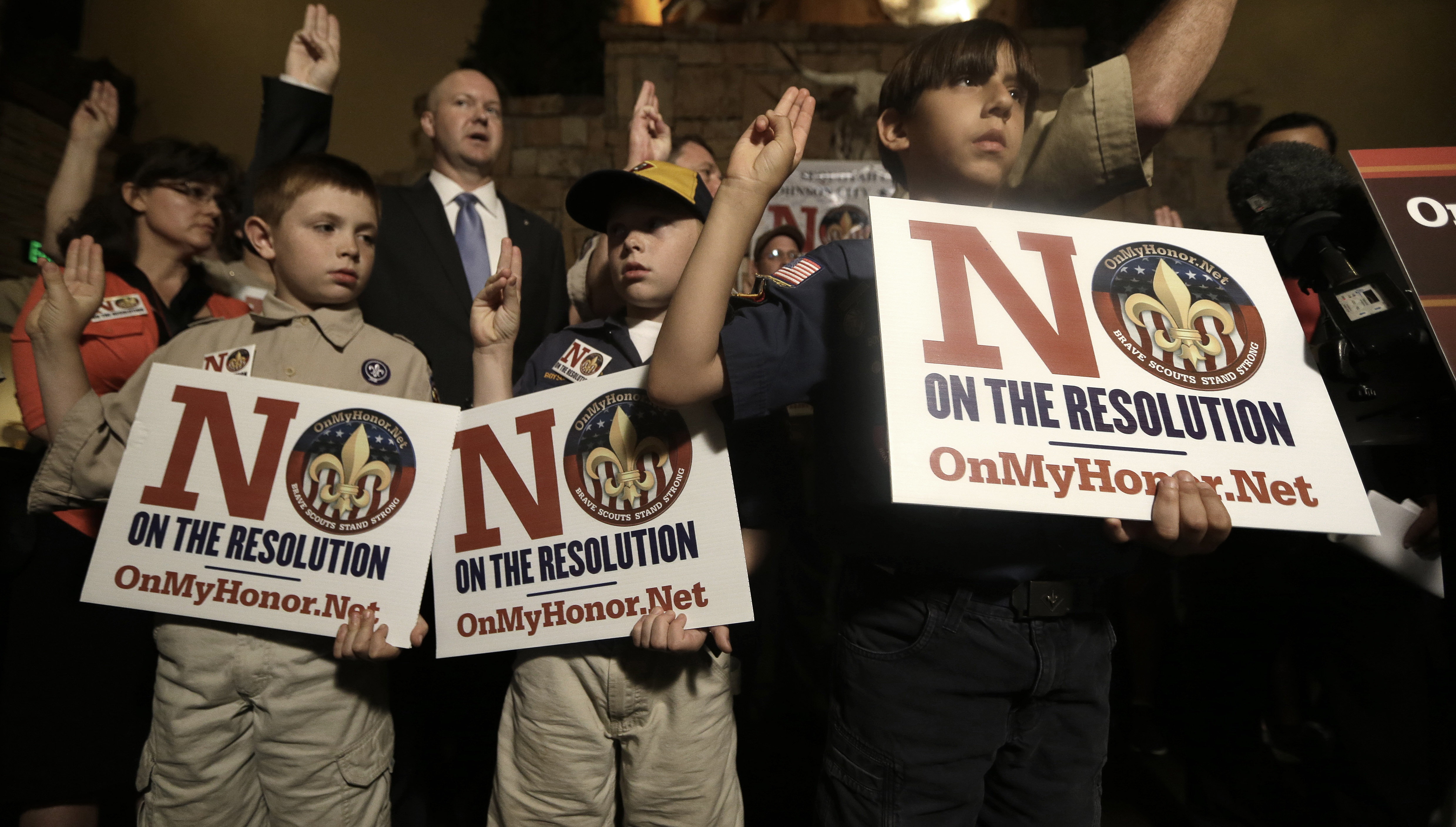 GRAPEVINE, Texas The Boy Scouts of America threw open its ranks Thursday to gay Scouts but not gay Scout leaders — a fiercely contested compromise that some warned could fracture the organization and lead to mass defections of members and donors.

Of the roughly 1,400 voting members of the BSA's National Council who cast ballots, 61 percent supported the proposal drafted by the governing Executive Committee. The policy change takes effect Jan. 1.

"This has been a challenging chapter in our history," the BSA chief executive, Wayne Brock, said after the vote. "While people have differing opinions on this policy, kids are better off when they're in Scouting."

However, the outcome will not end the bitter debate over the Scouts' membership policy.

Liberal Scout leaders — while supporting the proposal to accept gay youth — have made clear they want the ban on gay adults lifted as well.

In contrast, conservatives with the Scouts — including some churches that sponsor Scout units — wanted to continue excluding gay youths, in some cases threatening to defect if the ban were lifted.

"We are deeply saddened," said Frank Page, president of the Southern Baptist Convention's executive committee after learning of the result. "Homosexual behavior is incompatible with the principles enshrined in the Scout oath and Scout law."

The Assemblies of God, another conservative denomination, said the policy change "will lead to a mass exodus from the Boy Scout program." It also warned that the change would make the BSA vulnerable to lawsuits seeking to end the ban on gay adults.

"I would take my children out and that's a very painful decision to contemplate," John Stemberger, a Boy Scout leader from Orlando, told CBS News correspondent Manuel Bojorquez. "When they make a decision that puts the interest of a group of activists over the safety and the security of my sons, that's a program that I can no longer trust."

"While I will always cherish my time as a Scout and the life lessons I learned, I am greatly disappointed with this decision," he said.

The result was welcomed by many liberal members of the Scouting community and by gay-rights activists, though most of the praise was coupled with calls for ending the ban on gay adults.

"I'm so proud of how far we've come, but until there's a place for everyone in Scouting, my work will continue," said Jennifer Tyrrell, whose ouster as a Cub Scout den leader in Ohio because she is lesbian launched a national protest movement.

Pascal Tessier, a 16-year-old Boy Scout from Maryland, was elated by the outcome.

Tessier, who is openly gay, is on track to earn his Eagle Scout award and was concerned that his goal would be thwarted if the proposed change had been rejected.

"I was thinking that today could be my last day as a Boy Scout," Tessier said. "Obviously, for gay Scouts like me, this vote is life-changing."

The vote followed what the BSA described as "the most comprehensive listening exercise in Scouting's history" to gauge opinions.

Back in January, the BSA executive committee had suggested a plan to give sponsors of local Scout units the option of admitting gays as both youth members and adult leaders or continuing to exclude them. However, the plan won little praise, and the BSA changed course after assessing responses to surveys sent out starting in February to members of the Scouting community.

Of the more than 200,000 leaders, parents and youth members who responded, 61 percent supported the current policy of excluding gays, while 34 percent opposed it. Most parents of young Scouts, as well as youth members themselves, opposed the ban.

"The resolution also reinforces that Scouting is a youth program, and any sexual conduct, whether heterosexual or homosexual, by youth of Scouting age is contrary to the virtues of Scouting," said the Boy Scouts of America in a statement released Thursday.

"While people have different opinions about this policy," the statement continued, "we can all agree that kids are better off when they are in Scouting. Going forward, our Scouting family will continue to focus on reaching and serving youth in order to help them grow into good, strong citizens. America's youth need Scouting, and by focusing on the goals that unite us, we can continue to accomplish incredible things for young people and the communities we serve."

A White House spokesman issued a statement on behalf of President Obama: "The President welcomes the decision by the Boy Scouts of America to open its membership to all, regardless of sexual orientation. He has long believed that the Scouts is a valuable organization that has helped educate and build character in American boys for more than a century."

Since the executive committee just completed a lengthy review process, there were "no plans for further review on this matter," the group added, indicating it would not be revisiting the ban on gay adults anytime soon.

Among those voting for the proposal to accept openly gay youth was Thomas Roberts, of Dawsonville, Ga., who serves on the board of a Scout council in northeast Georgia.

"It was a very hard decision for this organization," he said. "I think ultimately it will be viewed as the right thing."

The BSA's overall "traditional youth membership" — Cub Scouts, Boy Scouts and Venturers — is now about 2.6 million, compared with more than 4 million in peak years of the past. It also has about 1 million adult leaders and volunteers.

Of the more than 100,000 Scouting units in the U.S., 70 percent are chartered by religious institutions.

Those include liberal churches opposed to any ban on gays, but some of the largest sponsors are relatively conservative denominations that have previously supported the broad ban — notably the Roman Catholic Church, the Church of Jesus Christ of Latter-day Saints and Southern Baptist churches.

While the Southern Baptists were clearly upset by the vote to accept openly gay youth, the Mormon church reacted positively.

"We trust that BSA will implement and administer the approved policy in an appropriate and effective manner," an official LDS statement said.

The National Catholic Committee on Scouting responded cautiously, saying it would assess the possible impact of the change on Catholic-sponsored Scout units.

The BSA, which celebrated its 100th anniversary in 2010, has long excluded both gays and atheists.

Protests over the no-gays policy gained momentum in 2000, when the U.S. Supreme Court upheld the BSA's right to exclude gays. Scout units lost sponsorships by public schools and other entities that adhered to nondiscrimination policies, and several local Scout councils made public their displeasure with the policy.