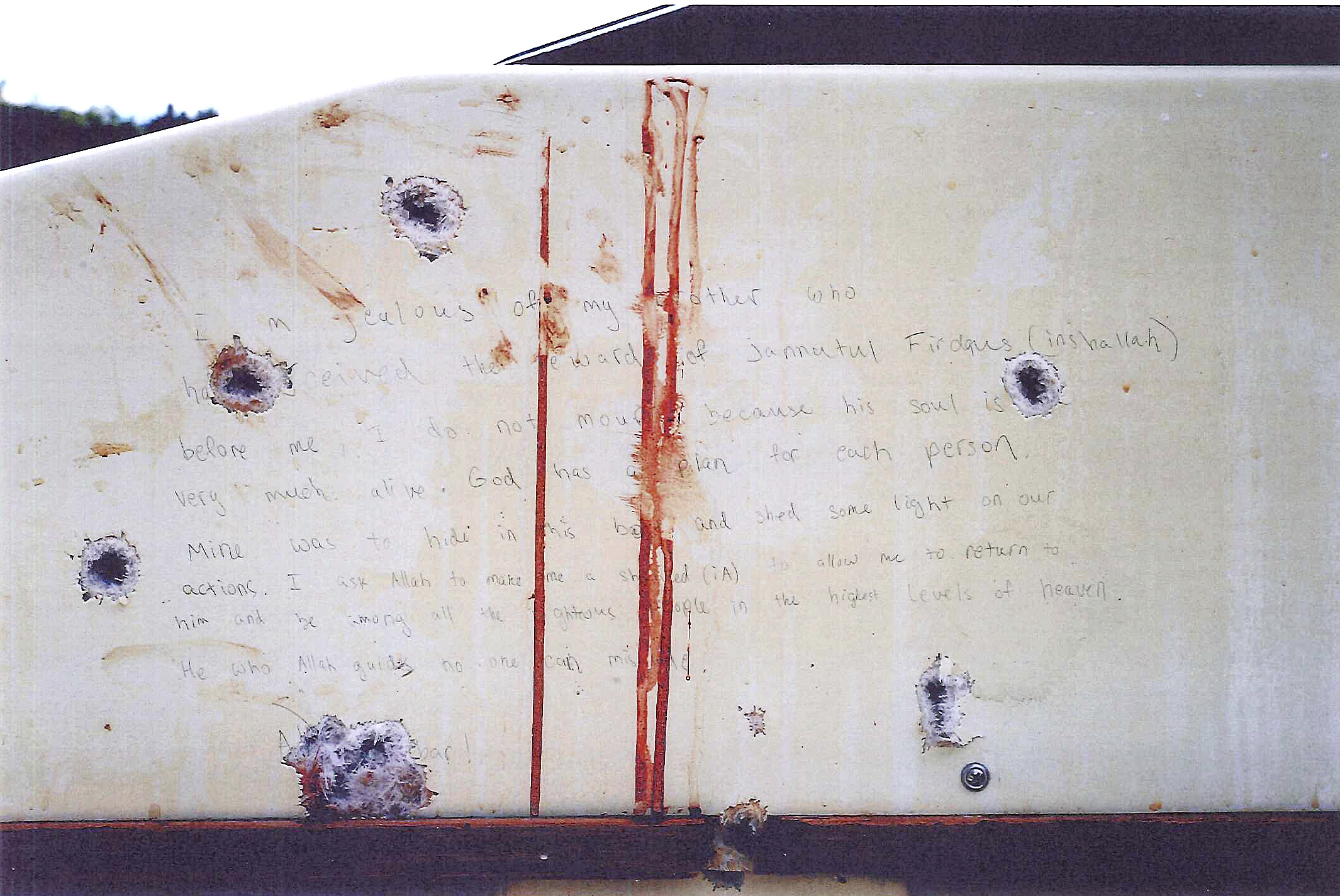 BOSTON -- Jurors in the trial of accused Boston Marathon bomber Dzhokhar Tsarnaev on Tuesday saw photographs of a blood-stained, hand-scrawled note speckled with bullet holes inside the boat he was captured in days after the deadly 2013 attack.

Prosecutors consider the note a confession and say it refers to the motive for the attack carried out by Tsarnaev and his late brother, Tamerlan.

In the note, written in pencil on the inside walls of the boat, Tsarnaev appears to decry U.S. actions in Muslim countries and says he is jealous of his brother because he is dead and now in paradise.

Tamerlan Tsarnaev, 26, died following a violent confrontation with police during a getaway attempt four days after the bombings. Dzhokzar, then 19, was found hiding in a boat parked in a yard in Watertown.

"I do not mourn because his soul is very much alive. God has a plan for each person. Mine was to hide in this boat and shed some light on our actions," he wrote, according to the photos shown to the jury by prosecutors.

The note also said: "The U.S. Government is killing our innocent civilians but most of you already know that. As a M (bullet hole) I can't stand to see such evil go unpunished, we Muslims are one body, you hurt one you hurt us all. ..."

"Now I don't like killing innocent people it is forbidden in Islam but due to said (bullet hole) it is allowed."

Judge George O'Toole Jr. is still trying to decide whether to allow prosecutors to cut out and bring to court the panels of the boat to show jurors or whether to bring the intact boat to the courthouse to be viewed outside by the jury, as requested by lawyers for Tsarnaev, who is now 21.

The judge ended court early Tuesday so he could go see the boat, accompanied by representatives of the prosecution and defense teams. The judge rejected a request from the media to allow a pool reporter and photographer to also see the boat.

Three people were killed and more than 260 were injured April 15, 2013, when two bombs exploded near the marathon finish line.

During opening statements at his trial, Tsarnaev's lawyer admitted he participated in the bombings but said Tamerlan Tsarnaev was the mastermind and recruited his younger brother to help him.

Todd Brown, a Boston police bomb technician, testified that he saw the writing inside the boat when he was sent to check it to make sure there were no explosives or booby traps on board.

During cross-examination of Brown, Tsarnaev's lawyers established that all the bullet holes were from shots coming into the boat when police fired. The officer said no bombs, guns or weapons of any kind were found inside the boat.

Several FBI agents also testified Tuesday about the collection of bomb components and other evidence from the scene of the two bombings. One agent said shrapnel from the two pressure-cooker bombs was found on the ground, inside buildings and the rooftops of buildings, including a four-story hotel.

On Monday, jurors watched a video prosecutors say shows the movements of the bombers before and after two explosions ripped through crowds near the finish line.

The video was compiled by the FBI using surveillance video from stores and restaurants along the route.

The video shows Dzhokhar walking with Tamerlan, each carrying a backpack.

It shows Dzhokhar dip his shoulder, then shows the backpack at his feet. Then, all heads turn and look toward the sound of an explosion. Dzhokhar doesn't look and begins walking in the opposite direction.

Seconds later, another bomb explodes. After that, the video shows Dzhokhar running in a crowd of people.