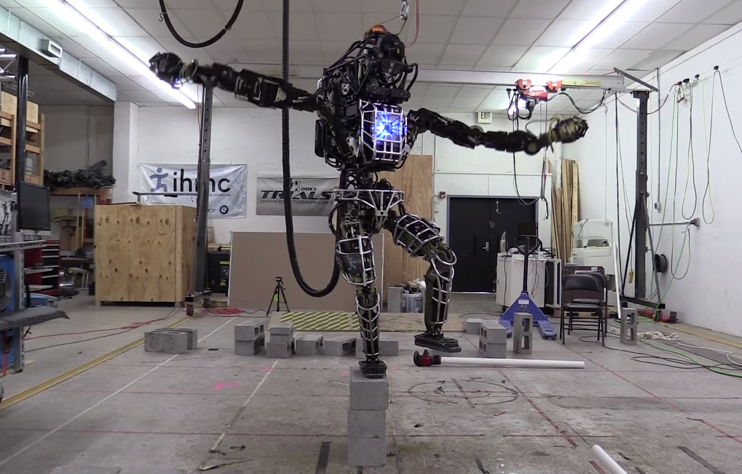 In the ultimate 1980s flashback, a robot has been programmed to mimic the crane kick made famous in the movie "The Karate Kid."

The Atlas robot, which looks eerily human with wiry arms and legs, is seen in a video standing on a podium in a workshop. With its human handlers just out of sight of the camera, the robot strikes a pose with its left leg in the air. It then slowly raises its two arms in a bird-like motion and then brings them back down to its side.

The feat probably wouldn't spook a prospective opponent. But it is the latest example demonstrating that robots can exhibit some of the flexibility found in the human body.

Built by Google-owned Boston Dynamics and programmed by the Florida Institute for Human and Machine Cognition, Atlas is designed to negotiate rough, outdoor terrain. With its 28 hydraulically actuated degrees of freedom and a sensor head containing a camera, this robot can climb, navigate tight spaces and use tools designed for humans.

Getting robots to act more like humans is one of the biggest challenges facing the field of robotics. Walking or standing upright comes easily to us, but it's a challenge for robots to match the sophistication our brain uses to coordinate multitudes of muscles.

Next up for Atlas is the DARPA Robotics Challenge to be held in Pomona, California, in 2015. Motivated by disasters such as the Fukushima nuclear power plant meltdown in Japan and the Deepwater Horizon oil spill, the goal of the competition is to develop a mobile robot which can assist humans in disaster zones.