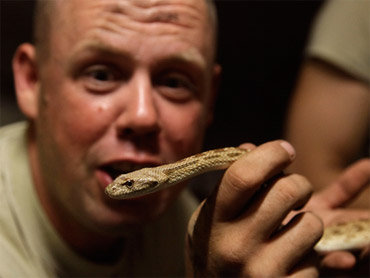 As night falls on this small hilltop base in the heart of Taliban country in southern Afghanistan, U.S. Army soldiers break out their knives and flashlights and go hunting for some of the country's deadliest inhabitants: snakes and scorpions.

Tracking down the "creepy crawlies" that lurk in the nooks and crannies of the countryside is a favorite pastime, providing education, some entertainment - arachnid fight night! - or even a quick meal.

The expeditions help break the monotony of 10-day rotations the soldiers do once or twice a month at this rugged outpost in Kandahar province. Other than patrolling for a few hours a day, there is little for troops to do except watch movies or lift weights at a makeshift gym.

Staff Sgt. Aaron Christensen, a self-described reptile nut who grew up exploring the woods and coastlines of Oregon, leads the charge at night. Unlike most soldiers on their first deployment, he was just as fired up about the wildlife in the Afghan countryside as he was about potentially battling Taliban insurgents.

"I knew we had our job to do, but I was thinking in the back of my mind that I hope to see some of the cool things I have only seen in pictures or at exotic reptile shows," said Christensen, who has owned cobras, rattlesnakes, lizards and a small alligator as pets. He even has two of his pet snakes tattooed on his left biceps.

The 30-year-old native of Portland, Oregon, has not been disappointed with what he and his fellow soldiers have found around the 200-foot rock and mud hill where their base is located. It is teeming with a wealth of snakes, scorpions, spiders and other wildlife.

"I found a black widow spider, and the body alone was the size of my fingernail," said Sgt. James Wilkes, the platoon's 23-year-old radio operator. "It was ridiculous."

Christensen's most exciting discoveries have been the world's most dangerous scorpion, the death stalker, and one of Asia's deadliest snakes, the saw scaled viper.

"I was like a kid in a candy store last night," said Christensen, recalling his efforts to extract the saw scaled viper from its mud den as the platoon's mortar squad fired illumination rounds in the background.

"Has he found the snake yet?" one of the mortar operators, Cpl. Steve Gurak, asked as soon as he was done firing.

The soldiers are all part of 1st Platoon, Charlie Company, 2nd Battalion, 1st Infantry Regiment. They are based at a slightly larger outpost in neighboring Maiwand district when not doing rotations at Ghundy Ghar.

While the platoon has mostly avoided getting into firefights with Taliban militants who operate out of mud compounds around Ghundy Ghar, they have staged pitched battles of their own between captured scorpions and camel spiders, which can grow to nearly 3 inches long.

"The camel spider ran in circles around the scorpion freaking out and then the scorpion grabbed him, stung him and started eating him," said Pfc. Drew Cross, the platoon's 24-year-old medic.

"It was pretty cool and keeps our battle skills sharp," he joked.

Perhaps with the scorpion in mind, one of the soldiers in the platoon, Spc. Jason Purdy, took up a dare from his buddy to eat a large camel spider after slicing off its jaws with a knife.

How did it taste?