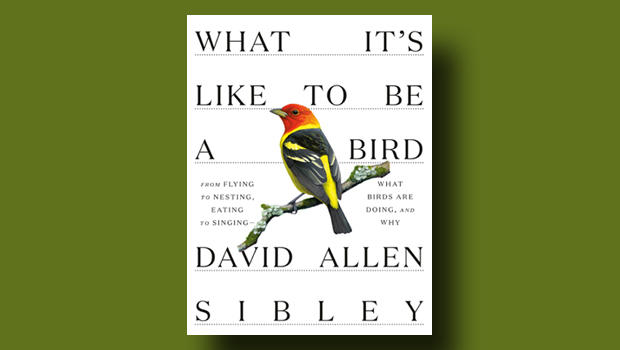 Illustrator and birder David Allen Sibley has become internationally renowned for his series of field guides capturing the beauty of birds. His 2000 book, "The Sibley Guide to Birds," has sold more than two million copies.

In his latest book, "What It's Like to Be a Bird: From Flying to Nesting, Eating to Singing – What Birds Are Doing, and Why" (Knopf), Sibley delves into the lives of birds and answers frequently-asked questions, such as, "Can birds smell?" (Yes, very well!)

The Golden-crowned Kinglet is one of the smallest birds in North America, smaller than some hummingbirds. They weigh about as much as a U.S. nickel, and still manage to survive the winter as far north as Canada.

Most of the day—up to 85 percent of daylight hours—is devoted to searching for food. At night they find a sheltered spot, huddle with up to ten or so other kinglets, and enter torpor to conserve energy.

Like other birds, their metabolism increases in the winter, essentially revving the engine to produce more heat, even though this uses more fuel. They eat insects, which in the winter means mainly insect eggs and larvae gleaned from twigs and bark. Kinglets in the winter probably need at least eight calories a day, which doesn't sound like much, but if we ate at the same rate, a hundred-pound person would need about sixty-seven thousand calories, which is about twenty-six pounds of peanuts, or twenty-seven large pizzas, every day.

From the book "What It's Like to Be a Bird." Copyright © 2020 by David Sibley. Reprinted by permission of Knopf Doubleday Publishing Group. All Rights Reserved.