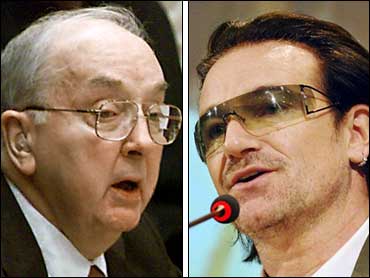 Before Irish rockers U2 opened to a raucous crowd of 17,000 at this city's new downtown arena, lead singer Bono had dinner with a political confidant former North Carolina Senator Jesse Helms.

"He (Bono) called us a couple of weeks ago and said he wanted to see his old friend the senator," said John Dodd, president of the Jesse Helms Center, who accompanied Helms and other family members to Monday's meeting.

Since they were introduced several years ago, the archconservative Republican known as "Senator No" and Bono have become unlikely allies in the fight against the AIDS epidemic in Africa.

Helms, who is 84 and suffers from a number of serious health problems, arrived backstage before the show and was joined by Bono for a casual meal. On the menu: grilled chicken, roast beef and salmon.

"It was nothing fancy," Dodd said. "They ate in the cafeteria with the roadies and the rest of the crew."

The two men talked for a few minutes about their work and what they have been able to accomplish and what needs to still be done, Dodd said. Bono briefed the senator on DATA — or Debt, AIDS, Trade in Africa — a nonprofit organization he helped found in 2002 with other activists to increase awareness of the crises in Africa.

"Bono gives the senator a great deal of credit for getting the ball rolling and giving (President George W.) Bush the cover to do even more," Dodd said.