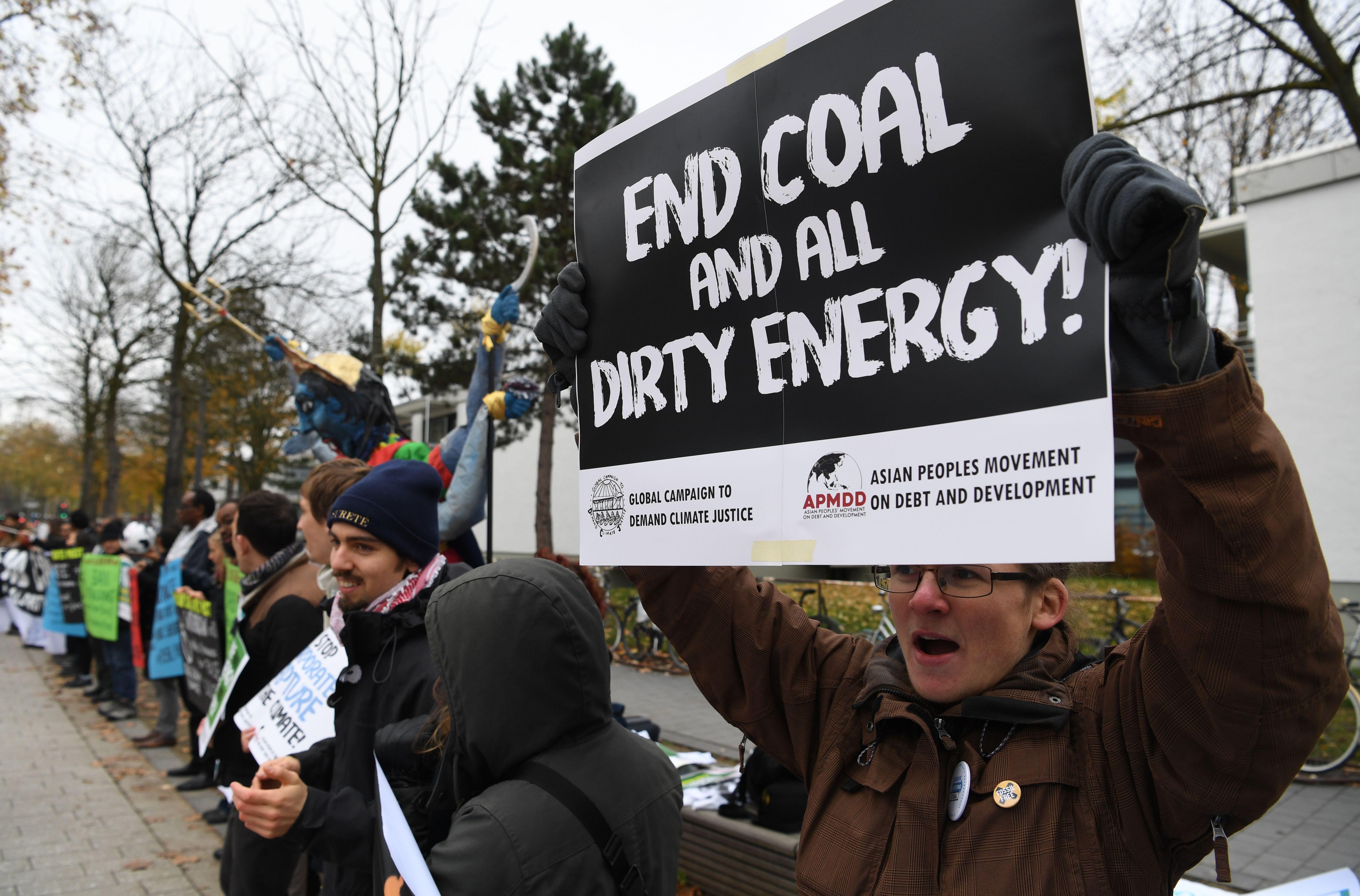 BONN -- World leaders arrived at global climate talks in Germany on Wednesday to give the negotiations a boost going into the final stretch, as campaigners took over a brown coal-fired power plant and called for a strong signal from rich countries on curbing greenhouse gas emissions.

Particular attention was focused on German Chancellor Angela Merkel, whose country is co-hosting the talks together with Fiji, a small Pacific nation that faces dramatic consequences from unchecked climate change.

Green campaigners and developing nations called on Merkel to use the event on her home turf to announce that Germany will set a firm deadline for phasing out the use of coal by 2030. Germany generates about 40 percent of its electricity from coal, including the light brown variety called lignite that's considered to be among the most heavily polluting fossil fuels.

Police and company officials said activists had occupied conveyor belts and other equipment at a lignite-fired power station in western Germany, causing some disruption to the plant. Police said several people in masks occupied the facility Wednesday at Weisweiler, west of Bonn. News agency dpa reported that operator RWE said it switched off two of the four power generating units for lack of coal.

In Bonn itself, Greenpeace said 14 of its activists protested on a coal ship on the Rhine river, laying out a banner reading "Merkel's Dirty Secret: Coal" as it passed the conference venue.

The talks, now in their second week, are largely technical in nature. But the Trump administration's threat to pull the U.S. out of the Paris climate accord -- and extreme weather events in many parts of the world -- have created pressure for other governments at the meeting to strongly affirm their support for the 2015 Paris accord.

The timing is difficult for Merkel: after speaking at the climate talks in Bonn she flies back to Berlin for negotiations on forming a new government that would include both the environmental Green party and a pro-business party, the Free Democrats, which opposes a coal deadline. Energy companies warn that coal is needed to ensure a steady supply of energy for Europe's biggest economy.

Much of the limelight Wednesday is expected to fall on Chancellor Angela Merkel of Germany, which is co-hosting the U.N. talks in Bonn with Fiji. Environmental campaigners want Germany to show its commitment to curbing global warming by announcing a deadline for phasing out the use of coal, a major greenhouse gas.

President Hilda Heine of the Marshall Islands, whose country risks being swallowed by the Pacific Ocean if global warming causes sea levels to keep rising, said a declaration that Germany will end its use of coal "would be a signal of hope for my country and for every vulnerable country around the world."

Merkel will be joined by U.N. Secretary-General Antonio Guterres and French President Emmanuel Macron, who has come out strongly in favor of efforts to fight climate change since taking office earlier this year.

Still, with U.S. President Donald Trump saying he wants to withdraw from the Paris treaty, scientists warn it will be difficult to achieve the central goal of keeping global warming well below 2 degrees Celsius (3.6 degree Fahrenheit) by the end of the century.

A group of U.S. states, cities and businesses that back the Paris accord have become the go-to contacts for many negotiators in Bonn who remain eager to work with the United States.

Washington's official delegation has been largely invisible at the talks, save for a U.S.-sponsored event promoting fossil fuels and nuclear energy late Monday that drew vocal protests from environmental campaigners.

Last month CBS News corespondent Ben Tracy reported that as the Trump administration declares "the war on coal" over, China is doing the opposite.

On a farm in northern China, they are planting a new crop: Nearly 200,000 solar panels in the heart of coal country.

In the south, China flipped the switch on the world's largest floating solar installation --  built on top of a lake created by an abandoned coal mine. Projects like these helped China double its solar capacity last year. It is now twice as big as the U.S. capacity.

The talks have also seen dozens of announcements from businesses and governments that pledged to reduce emissions or to commit large sums of money to helping poor countries tackle the effects of climate change.

The meeting, which is scheduled to end Friday, is aimed at producing draft rules for implementing the Paris accord. The rules would need to be finalized by the time of next year's global climate talks in Poland.