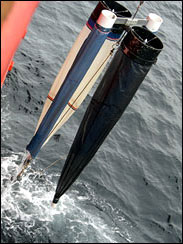 We're crossing into the Labrador Sea, and I'm finally getting my head around some of the science involved. Specifically the use of bongo nets – bongo because they look like bongo drums – and I appreciate the simplicity. They collect zooplankton, scientists map its DNA and look at its nutrient make-up. It all matters because it's a crucial component of the food chain. The first official research station is tomorrow – for now it's been practice, fixing broken equipment, general panic, etc.

I had literally no idea that iceberg ice is a huge commodity, that people – specifically the Japanese – pay thousands of dollars for it, that others use it to make vodka, and that un-named coast guard members hack it off, bring it home, and scam tourists with it.

Rico Amamio is the acting boatswain on the ship and is phenomenal. He's from the Philippines, and worked on tankers all over the place until he met a woman in Halifax, got married, had 2 kids, and got divorced. He's been on the Louis S. St. Laurent for 14 years, and is quite clearly the one to go to when ever any sort of issue – technical, scientific, personal – arises. He'll climb anywhere, at any height and is alarmingly stealth. Because of this, they call him the Arctic Cat.

The chief officer – or second in command – is Brian Gibbons and lovely. Last time they were at the North Pole someone dressed up as Santa, much to the delight of Brian's 3 believing-age sons listening to reports from home. He added that they had a holiday barbeque as well. And that Santa "arrived with 8 reindeer and left with 7."

There are rumors of a peep-hole in the women's washroom. I've investigated and think this is debatable.