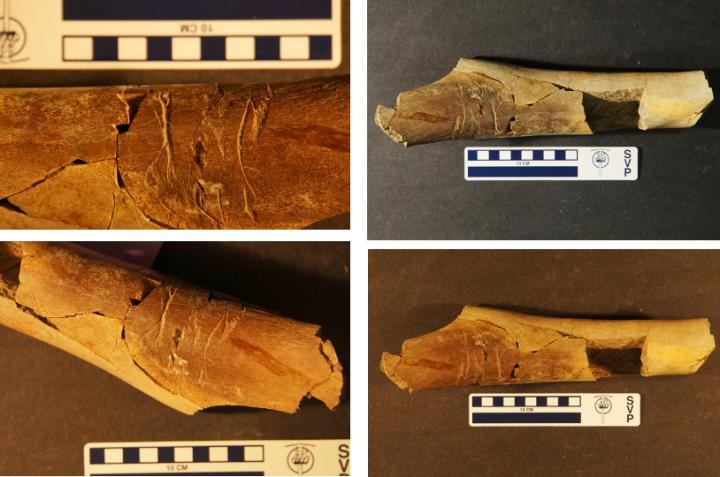 From one bone, paleontologists have unearthed a deep dark secret of the tyrannosaur family: The large dinosaurs might have been cannibals.

The tyrannosaur bone in question was found in Wyoming's Lance Formation -- a division of rocks that date back to the late Cretaceous Period -- and displays teeth marks that appear to be from another tyrannosaur.

Researcher Matthew McLain, a PhD geology candidate at Loma Linda University in California, will present the findings Nov. 1 at the annual meeting of the Geological Society of America in Baltimore.

"It's really good evidence that cannibalism has been going on in these dinosaurs. It's been inferred before, there are a few other examples, but nothing presented us with very clear field traces until now," McLain told CBS News. "We can now say, 'we know what animal this came from, we know what animal was doing the biting.' It gives us hints as to what they were up to, what their diet was -- we can understand their biology more."

McLain added that it has long been theorized that tyrannosaurs exhibited cannibalistic behavior given that many modern carnivorous animals, like sharks, eat members of their own species. Still, there was little concrete evidence until now.

The big clue came from the teeth mark themselves. The grooves clearly suggested an animal pulling flesh off the bone, like a human eats a chicken wing. But one groove contained smaller parallel grooves, a pattern that would have been created by a serrated tooth.

That ruled out crocodiles, which don't have serrated teeth, and instead pointed to a theropod. Given that the only large theropods found in the Lance Formation are tyrannosaurs, including T. Rex, the mark could only be explained by cannibalism

"This has to be a tyrannosaur," McLain said in a press release. "There's just nothing else that has such big teeth."

Moving forward, McLain said that it will be important to study the bone closer. They don't know how large the animal was or whether it was an adult. The next phase would be to cut through the bone in order to gather more conclusive data on the teeth serration sizes, and figure out the size of the animal that was being attacked.

"It's exciting that we are able to learn so much from just a broken bone with a few scratches on it. A century ago, people would have found this and just chucked it," he said. "It's interesting the things from their behavior you can learn, things you never would understand about them without examining the bones."