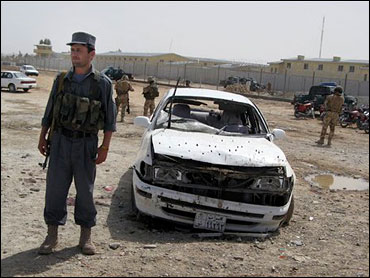 A suicide bomber in a police uniform detonated explosives he was carrying inside a police headquarters in southern Afghanistan on Monday, killing 11 people and wounding 29 others, the Interior Ministry said.

The bombing followed a surge in violence in Afghanistan over the weekend that led to the deaths of eight foreign troops, including four Americans.

The bomber Monday set off his explosives after slipping inside the main police building in Lashkar Gah, the capital of Helmand province, while the police were exercising, said Asadullah Sherzad, the provincial police chief.

The attack killed nine police and two civilians and wounded 29 others, mostly police, the Interior Ministry said in a statement.

The attack is most likely the work of Taliban militants, who regularly use suicide bombers in their attacks against Afghan and foreign forces in the country.

In a separate incident Monday, CBS News' Fazul Rahim reports that another suicide bomber tried to enter the police headquarters of Delaram district, in the neighboring Farah province, but was shot dead before he could enter the building. The bomb he was carrying exploded and killed one police officer, according to Interior Ministry spokesman Zemarai Bashari.

Southern Afghanistan is the center of the Taliban insurgency. The U.S. is sending thousands of new troops to the south this year to try to reverse Taliban gains. The Islamic militants have made a violent comeback the last three years following an apparent initial defeat after the 2001 U.S. invasion.

Violence has also increased along Afghanistan's eastern border with Pakistan, a mountainous region believed to be home to many Taliban and al Qaeda militants.

(AP Photo/Mohammad Sajjad)
As many as 50 militants attacked a terminal for trucks carrying supplies to U.S. and NATO troops in Afghanistan early Monday, in the second such assault in northwest Pakistan in two days. (Damaged military hardware from the attack seen at left.)

Increasing Taliban attacks have raised doubts about the reliability of critical supply routes through Pakistan, prompting the U.S. and NATO to seek alternatives.

The assailants attacked the al-Fasil terminal early Monday, outnumbering security guards and throwing gasoline over 10 container trucks carrying supplies and setting off explosions, said guard Janab-e-aali. There were no reports of injuries or deaths.

"They disarmed all the guards and warned us not to be smart, they snatched our weapons too," the guard said.

It was unclear if the torched supplies were destined for foreign troops in Afghanistan or for the Western-backed Afghan army, which uses similar imported equipment.

On Sunday, attackers at another terminal in the city burned about 20 vehicles, including several Humvees.

Afghan-based U.S. and NATO forces get up to 75 percent of their supplies via routes through Pakistan.

Meanwhile, attacks in Helmand over the weekend killed three British troops, while a roadside bomb in the east Sunday killed four U.S. troops. A French soldier was also killed in a clash on Saturday, making the weekend one of the deadliest two-day periods for international troops in weeks.

The spike in violence is an early indication that roadside bombs and other ambushes are likely to surge as some 17,000 U.S. forces arrive in Afghanistan this year to bolster the record 38,000 Americans already in the country.