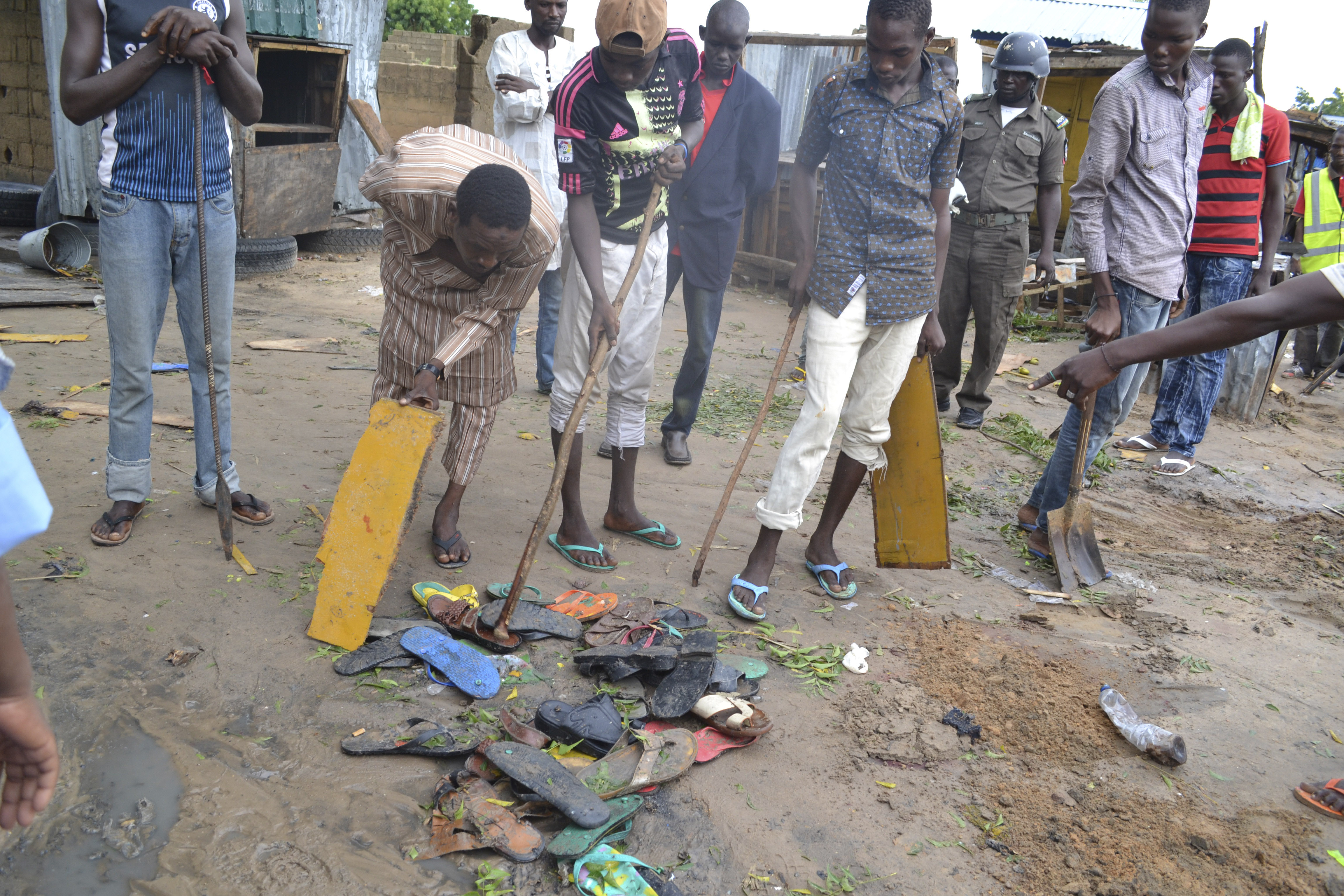 Another twin suicide bombing killed at least 30 people in Madagali, a town 95 miles southeast of Maiduguri, witnesses said. Danladi Buba said two women detonated at a market near a busy bus station at about 9 a.m. Brig. Gen. Victor Ezugwu, the officer commanding in northeast Adamawa State, confirmed the attack but said casualties have yet to be established.

The military said there were multiple attacks at four southwestern entry points to the city, including a woman suicide bomber who killed one other person and injured 13 gathered outside a mosque after dawn prayers Monday.

The attack appears to be a challenge to President Muhammadu Buhari's declaration last week that Boko Haram has been "technically" defeated, capable of no more than suicide bombings on soft targets.

Nigerian troops "intercepted and destroyed" 10 suicide bombers and repelled the attackers, according to PR Nigeria, an agency that disseminates government news.

Maiduguri, the city under attack, is the birthplace of Boko Haram, which emerged as a much more radical entity after Nigerian security forces launched an all-out assault on their compound in the city, killing 700 people in 2009.

Militants firing indiscriminately from the back of three trucks attacked the outlying village of Dawari, soldiers engaged them, and as people were fleeing, a woman ran into the area yelling "Boko Haram, Boko Haram." When people gathered, she detonated herself, according to village head Bulama Isa.

A rocket-propelled grenade exploded, setting alight grass-thatched huts, and a second woman blew herself up, according to Isa. Meanwhile, in Duwari, an outlying suburb of Maiduguri, the village chief, 10 of his children and others were killed, according to residents Ahmed Bala and Umar Ibrahim.

A soldier said the insurgents fired rocket-propelled grenades into four residential areas on the outskirts of the city. Soldiers fired back, and many civilians were caught in the crossfire, according to the soldier, who spoke on condition of anonymity because he is not authorized to speak to journalists.

A nurse and a guard at Maiduguri Specialist Hospital said at least 20 other bodies arrived overnight and dozens of critically wounded, mainly children and women, may not survive.

The nurse, who spoke on condition of anonymity because she is not authorized to speak to reporters, said the hospital was so overflowing with patients that some had to be cared for in the maternity ward. About 60 people had wounds from bullets and shrapnel from explosive devices, she said. Other wounded people had to be sent to other hospitals in the city.

Among those at Specialist Hospital was a baby found dead, still tied to the back of her mother, after being hit by shrapnel, the nurse said.

It was hard to do a body count because so many had been blown into pieces, she said, describing torsos and dismembered arms and legs.

The guard said he counted about 70 people who arrived overnight, most of them lifeless.

Some slipped through. Three suicide bombers blew themselves up at a home near Bakassi Estate, killing 18 people Sunday evening, a soldier told The Associated Press on condition of anonymity because he is not supposed to speak to reporters.

Maiduguri, a city of about 1 million people, now hosts almost as many refugees, among 2.5 million people driven from their homes in the 6-year-old uprising. About 20,000 people have been killed in Nigeria and hundreds others elsewhere as the insurgents have carried their conflict across its borders into Cameroon, Niger and Chad.