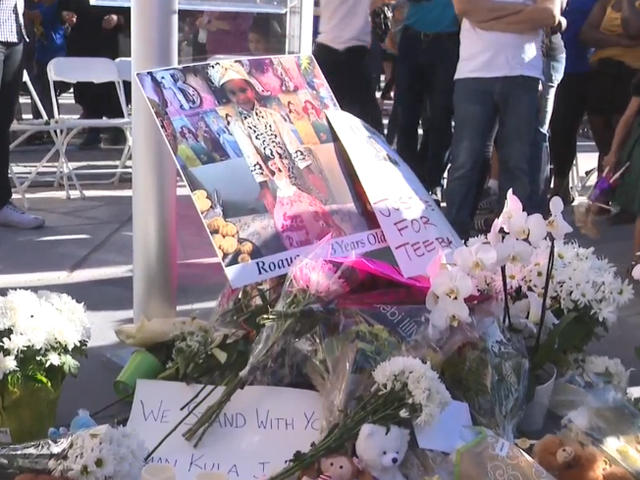 BOISE, Idaho -- The three-year-old Idaho girl who died from her wounds two days after a mass stabbing at her birthday party Saturday has been identified as an Ethiopian refugee "who loved pink and Disney princesses." CBS Boise affiliate KBOI-TV reports Ruya Kadir is the victim who lost her battle to survive.

The station cites The International Rescue Committee, an organization providing support for the families involved in the stabbing.

IRC President and CEO David Miliband said in a statement, "Our caseworkers describe Ruya as a child who always sparkled when she walked into a room. She was her mother's princess, always the center of attention, and loved pink and Disney princesses. She had just turned three years old Saturday, and according to our IRC colleagues in Boise, was the epitome of sweetness.

"Ruya and her mother are Ethiopian refugees. They arrived in the U.S. in December 2015 and settled in Boise. Her father is in Turkey. Ruya's parents are enduring every parent's worst nightmare, which is made doubly cruel by the fact that they fled to America to escape conflict in Ethiopia. IRC had resettled the Kadir family in Boise. Our local team is doing everything possible to support the family – and the other refugees injured on Saturday – in this moment of extreme distress and fear."

Authorities say a man invaded the birthday celebration and attacked nine people with a knife.

Timmy Kinner is accused of stabbing a group of children and the adults who tried to protect them at the party at an apartment complex that is home to many refugee families.

Word of the child's death came at Kinner's first court appearance, where Ada County Magistrate Judge Russell Comstock told him that he was charged with first-degree murder and other felonies in connection with the attack.

Comstock told Kinner he was "an extreme danger to the community" and ordered him held without bond.

Kinner is American, and the victims are members of refugee families from Syria, Iraq and Ethiopia. Boise Police Chief William Bones said the evidence doesn't suggest the attack was a hate crime.

The suspect had recently stayed at the apartment complex but was asked to leave Friday over bad behavior, Bones said.

Three of the stabbing victims were adults, the others children: the 3-year-old girl who died, two 4-year-olds, a 6-year-old, an 8-year-old and a 12-year-old.

If convicted, Kinner could be eligible for execution under Idaho law.

Monday evening roughly 1,500 people turned out at a vigil honoring members of refugee families targeted in the stabbing.

People wept, sang and shouted their support for the refugee community, and many brought bouquets of white flowers intended to symbolize peace. By the end of the rally, hundreds of bouquets filled dozens of baskets on the steps of Boise's City Hall.

But community leaders told the crowd that what the survivors really need is money to cover rapidly growing medical bills and space at home to try to overcome the constant sense of unease they've experienced since the attack. Boise Mayor Dave Bieter and others urged community members to do what they can to help.

Signs were dotted throughout the crowd, some reading "love wins" and "we are all immigrants."

Younis Kamel, a 16-year-old who moved to Boise from Iraq, and his 23-year-old sister Zuzu Kamel held up a more poignant sign:

"I will never forget seeing my friend getting stabbed in front of me," the sign read. Younis Kamel was at the apartment complex the night of the attack.

Another woman held a sign reading "Justice for Teeba," with a photo of a young child in a hospital bed, a breathing tube obscuring part of his face with half a dozen other tubes and medical devices connected to his body.

Correction: An earlier version of this story misstated the name of IRC President David Miliband.