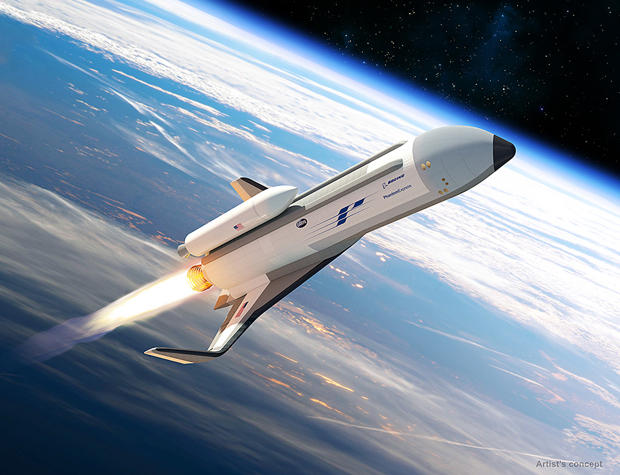 Boeing and Aerojet Rocketdyne successfully test-fired a space shuttle-era engine 10 times in 10 days, demonstrating the rapid turnaround capability critical to the Phantom Express, a reusable spaceplane, officials said Tuesday. The hydrogen-fueled engine that was tested was originally designed for NASA's space shuttle, which launched for 135 missions.

The Phantom Express, being developed by the Defense Advanced Research Projects Agency (DARPA), stands about 100 feet tall and tips the scales at 240,000 pounds. It will launch vertically using the AR-22 engine, then fly to altitudes of 40 to 60 miles and release an upper stage rocket to boost satellites weighing up to 3,000 pounds into orbit.

The unpiloted winged booster would then autonomously fly back to Earth and land horizontally on a runway like an airplane, ready for inspections and preparations for another launch in as little as one day.

The Air Force and Boeing already operate two small X-37B military spaceplanes that launch atop expendable boosters to carry out classified research in orbit. Like the Phantom Express, they return to runway landings, but they are not equipped with large engines, cannot launch on their own and are not designed to boost satellites into orbit.

"For this program, what we really wanted to do was design a system that was able to fly 10 times in 10 days," said Scott Wierzbanowski, Experimental Spaceplane program manager for DARPA. "This takes off the table the concern that a reusable spaceplane or a reusable booster can inherently be operable."

"We also wanted to design the overall system to be able to insert greater than 3,000 pounds into orbit at a cost of less than $5 million per flight. From our perspective, we figured that was kind of that sweet spot between large space lift and the small up-and-coming expendable systems that will allow us to have true military and commercial capability."

The Aerojet Rocketdyne AR-22 main engine was test fired 10 times between June 26 and July 6 at NASA's Stennis Space Center in Mississippi where similar RS-25 main engines are being tested for use in NASA's heavy-lift Space Launch System rocket.

The RS-25 engines are modified versions of surplus "block 2" powerplants left over from the shuttle program, while the Phantom Express engine was made up of older shuttle-heritage hardware that did not meet the more stringent requirements of the SLS system.

Even so, the idea of firing a complex shuttle main engine of any heritage a total of 10 times in 240 hours would have shocked shuttle engineers who devoted long hours to painstaking inspections and servicing between flights.

That's not surprising given a 7,000-pound shuttle engine generated more than 375,000 pounds of thrust at sea level with a hydrogen turbopump that spun at more than 35,000 rpm while generating 71,000 horsepower. The shuttle flew with three such engines while the Phantom Express will use just one.

For the 10 rapid-turnaround test firings, the AR-22 was operated at 100 percent power and throttled to as low as 80 percent during runs lasting at least 100 seconds.

Jeff Haynes, AR-22 program manager for Aerojet Rocketdyne, said the ability to fire the engine 10 times in 10 days was due to the company's long experience across the shuttle and SLS programs, which includes more than a million seconds of cumulative firing time and more than 3,200 starts.

"So we have a lot of data on the inspections that we need to run and how (many) of those have actually resulted in findings," he said. "We did do some boroscope (inspections of turbine blades), we did some torque checks on some of the turbo machinery and we did nozzle leak checks and things like that. But we did not do the typical shuttle profile of pulling the pumps from the engine and doing a detailed inspection."

In addition, he said, "we have significant instrumentation that allows us to know when we are getting into issues and we have redlines that allow us to abort in that scenario. So we felt that running up to those points would be sufficient, and it was successful. So that is the approach we are taking going forward."

Haynes said enough components are available to build a second flight-qualified AR-22 engine and that the test article used in the fast-turnaround tests also could be used for flight.

The program hopes to launch the Phantom Express on its first test flight in 2021. Managers have not yet selected a design for the disposable upper stage or settled on a home base for the spaceplane.