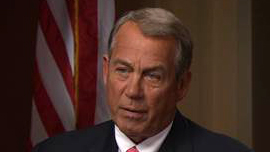 House Speaker John Boehner, R-Ohio, says the "Tea Party" conservatives who attack him for not being conservative enough do it because it's an effective fund-raising strategy. "It works," he tells Scott Pelley in a joint interview with Mitch McConnell, R-Kentucky, the new Senate Majority leader, to be broadcast on 60 Minutes Sunday, Jan. 25 at 7 p.m. ET/PT.

Boehner says he is as conservative as anybody on Capitol Hill and that the differences between mainstream Republicans like himself and the "Tea Party" types is one of tactics rather than vision.

The joint interview is the first the Republican leaders have done since the new, Republican-majority Congress convened a few weeks ago. Below is an excerpt from Sunday night's interview:

PELLEY: Mr. Speaker, can you bring the Tea Party in line? There are Tea Party groups that hold fundraisers under the heading of, "Let's fire the Speaker." They don't think you're very conservative.

BOEHNER: Well my voting record is as conservative as anybody here. The issue with the Tea Party isn't one of-- strategy. It's not one of different vision. It's-- it's a disagreement over tactics, from time to time. Frankly, a lot is being driven by national groups here in Washington who have raised money and just beating the dickens out of me.

PELLEY: Conservative groups, raising money, beating the dickens out of you.

BOEHNER: It works. They raise money, put it in their pocket, and pay themselves big salaries.

PELLEY: How many Republican parties are there?

BOEHNER: Well, there's one. And we continue to work to bring those members along, and they bring 'em along. But it's always a work in progress.