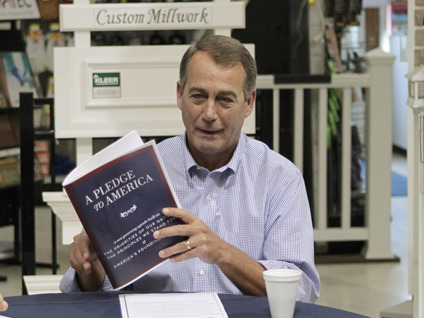 The House of Representatives has become dysfunctional, Boehner argued, due to rules and other institutional barriers that need to be reformed.

"The House finds itself in a state of emergency. The institution does not function, does not deliberate, and seems incapable of acting on the will of the people," Boehner said in a speech today at the American Enterprise Institute, a conservative think tank. "These wounds have been self-inflicted by both parties, and if we do not fix them, it's possible no one will be able to."

Boehner argued today that too many congressional rules and customs make it easier to enact new spending while making it hard to cut spending.

So while Democrats have instituted "pay go" rules to ensure that every new spending measure is paid for, Boehner call for "cut as you go" rules.

"Under this 'CutGO' rule, if it is your intention to create a new government program, you must also terminate or reduce spending on an existing government program of equal or greater size - in the very same bill," he said.

Boehner also proposed doing away with 'comprehensive' spending bills, in order to encourage more scrutiny of them and to make spending cuts easier to achieve.

He also suggested revisiting and potentially re-writing the 1974 Budget Act.

"We routinely waive the Budget Act's requirements to serve our purposes," the GOP leader said. "While the culture of spending stems largely from a lack of political will in both parties to say 'no,' it is also the consequence of what I believe to be a structural problem."

The White House and congressional Democrats often cast Republicans as the "party of No" and blame the GOP for holding legislative efforts "hostage."

Boehner today also said that this Congress has not accomplished enough. "Instead of tallying up a final flurry of legislative output, observers and constituents are asking, 'what went wrong?'" he said.

The GOP leader turned the table on Democrats and blamed them for holding up legislation, such as extension of the 2001 and 2003 Bush tax cuts. Democrats have yet to put the matter up for a vote, even though the tax cuts will expire at the end of the year if Congress does not act. The American public and most Democrats agree the tax cuts should be extended for the middle class, but some Democrats in Congress and Republicans argue they should also be extended for the wealthy.

"This week, we had, in my view, an obligation to bring both parties together and stop massive tax increases scheduled to take effect on January 1st," Boehner said. "And, even with the existence of a clear bipartisan majority and the support of the American people, we could not get a simple up-or-down vote."

The White House put out a pre-emptive critique of Boehner's speech today, predicting that the Republican wouldn't offer up any valuable ideas.

"Please excuse us for being more than a little skeptical that this is anything other than a brief election year conversion," White House communications director Dan Pfeiffer wrote in a blog post. "One thing is already clear: they haven't changed, so they won't bring the change we need. Despite their talk about ending "backroom deals" and their promises of transparency, Congressional Republicans have repeatedly shown that they still pay more attention to lobbyists than they do to the American people."

Pfeiffer blasted the House Republicans' "Pledge to America," which the GOP unveiled last week, as a document that caters to special interests and was written with an air of secrecy. Pfeiffer points to the step Democrats have taken, by contrast, to increase transparency in government and thus reduce the influence of special interests.