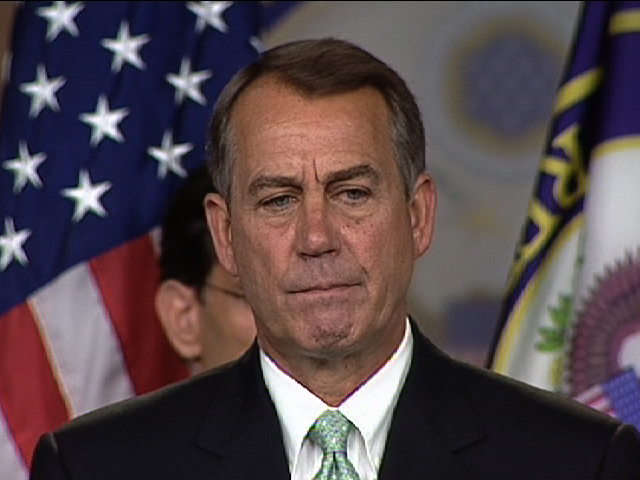 The House next week will take a vote to raise the debt ceiling and pass a balanced budget amendment, House Republican leaders said today.

The plan is unlikely to go anywhere, since a balanced budget amendment would likely fail in the Democrat-led Senate, but GOP leaders nevertheless called it a serious plan to raise the debt ceiling. They said President Obama and Democrats have failed to come up with an equally serious plan.

"We asked the president to lead," House Speaker John Boehner said in a press conference today. "We asked him to put forward a plan -- not a speech, a real plan -- and he hasn't. We will."

The "cut, cap and balance" proposal would make raising the debt ceiling contingent on Congress sending a balanced budget amendment to the states. It would also cap government spending at 18 percent of Gross Domestic Product over the next 10 years.

The plan would raise the debt ceiling by $2.4 trillion, since that is the increase requested by the president. However, the plan would actually make even more in spending cuts -- as much as $111 billion in 2012 alone.

"My expectation is you'll probably see the House vote on a couple of things just to make political statements," he said. "If you're trying to get to $2.4 trillion without any revenue, then you are effectively gutting a whole bunch of domestic spending that is going to be too burdensome and is not going to be something I would support."

Boehner said the House would vote on the "cut, cap and balance" plan and then decide how to proceed from there.

"I don't want to preclude any chance of coming to an agreement, but [Democrats have] been unwilling to put a real plan on the table," Boehner said. "Without serious spending cuts or real reform to entitlement programs, this problem is not going to be solved."

The lawmakers have less than three weeks to reach a deal before August 2, when the Obama administration says the U.S. would be "running on fumes" without an increase in the $14.3 trillion debt ceiling. The U.S. could risk defaulting on its loans or failing to meet its other financial obligations, which could significantly disrupt the U.S. and world economy, they say.

All parties involved say that a significant deficit reduction plan should be part of the plan to raise the debt ceiling, but Democrats want to balance the budget by raising tax revenues in addition to making spending cuts -- and the GOP remains firmly opposed to any tax increases.

Early Friday morning on Fox News, Boehner lamented the "remarkably different visions" that Democrats and Republicans have of the role of government, which have kept the talks from progressing.

After intense negotiations all week, Mr. Obama told lawmakers Thursday that it's "decision time." The president addressed the status of the negotiations in a news conference Friday morning, after Boehner's press conference.

In response to a question about whether the McConnell-Reid plan had any chance in Congress, Boehner said, "I am not prepared at this point to pick winners or losers."