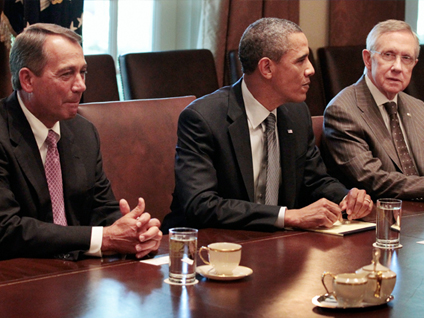 President Obama told lawmakers at Thursday's White House meeting to reach a deal to increase the debt limit that "it's decision time," a Democratic official familiar with the talks told CBS News, and pressed Congressional leaders to go back to their respective caucuses to get a deal done within the next 24 to 36 hours.

Following an acrimonious meeting on Wednesday, in which Mr. Obama and GOP Rep. Eric Cantor has some tense moments, the official said Thursday's meeting was "very cordial" -- though there continued to be no breakthrough. The meeting ran for an hour and 19 minutes, and the official said President Obama told Congressional leaders that they now had all the information they needed -- "in detail" -- to potentially get the deal done.

The Democratic official said Mr. Obama reiterated his opposition to a short-term deal Thursday, saying it could cause a negative reaction in the markets. The official said the president said a $2 trillion deal was possible if all sides would give a little.

"I want to do the largest deal possible," Mr. Obama said, according to the official, adding: "A short-term solution is not something I will sign."

Among the topics discussed in Thursday's meeting were "getting savings out of health care entitlement programs, tax expenditures and budget process changes," the official said, as well as extending the payroll tax cut and extending unemployment insurance.

"In today's meeting, the President made his position clear: He wants the largest deal possible - with tough spending cuts, including entitlement reforms, and savings from the tax code," the Democratic official said.

While there have been meetings daily throughout the week, lawmakers do not plan to meet tomorrow. The president will discuss the state of the talks on Friday at 11 a.m. Eastern Time.

A Republican aide familiar with the meeting called it "composed and polite" and confirmed that  the President said he expected them to "find agreement on the path forward over the next 24 to 36 hours."

The aide said Treasury Secretary Timothy Geithner told lawmakers that world financial markets are concerned both about seeing the debt ceiling increased and about a plan to address the deficit and debt.

House Speaker John Boehner "used that warning to reiterate his concern that nothing the administration is offering to this point will resolve our debt problem," the GOP aide said. "He continued to press the White House to get serious about reducing spending in a meaningful way."

There are less than three weeks before the August 2 deadline when the Obama administration says the nation's $14.3 trillion debt limit will be breached, and lawmakers appear to remain far apart on a deal.

Republicans, who control the House of Representatives, have said they will only vote to increase the debt limit in exchange for a deficit-reduction package larger than the amount of the increase. Democrats are in favor of such a package, but there is a major point of contention between the parties: Republicans want the deal to include only spending cuts, while Democrats say it must also include revenue increases as well. And boxed in by their base, neither side has shgown much willingness to budge.

If the debt ceiling is not increased by August 2, the administration says, the United States will no longer to be able to pay its obligations, potentially resulting in default to creditors, the suspension of Social Security checks and other benefits, an increase in interest rates and a host of other extremely serious and negative economic consequences. Administration officials have suggested a deal must be in place by roughly July 22 in order to get a deal through Congress in time.

On Wednesday, ratings agency Moody's put the United States' Aaa bond rating under review for possible downgrade as the deadline approaches; on Thursday, Geithner said bluntly, "we're running out of time."  (You can read a primer on the debt limit fight here.)

Boehner has emerged during the debate as the Republican leader most willing to compromise, working with Mr. Obama on a "grand bargain" deal to reduce the deficit by $4 trillion over a decade. (That attempt fell apart last weekend, though the White House is still pushing for the larger deal; the goal has now been pushed back to $2 trillion.)

Cantor, by contrast, has been cast as a hard-liner unwilling to give an inch, making him the emerging hero of Tea Party-backed freshmen and prompting chatter of a split in the GOP leadership.

Democrats spent Thursday casting Cantor as an obstacle to progress, with Senate Majority Leader Harry Reid calling him "childish" and saying Cantor "has shown he shouldn't even be at the table." Sen. Charles Schumer, meanwhile, disputed Cantor's claim that there is no deficit reduction deal that can pass the House and suggested that Cantor is "the only real person who has not made any concessions."

"He is basically standing in the way, and it's a shame," Schumer said.

Meanwhile, Boehner, Cantor and other Republicans held a press conference to push for a balanced budget amendment - something that virtually no one expects can be included in a debt limit deal, especially considering that it would require a two-thirds majority in both houses of Congress. Boehner defended Cantor against Democratic criticism, saying claims that "the role he has played in these meetings has been anything less than helpful is just wrong."

All parties involved in the negotiations say there will be a deal to raise the debt ceiling one way or another, though no one seems quite sure how to get there. The idea seen as the most likely to result in a breakthrough is one involving a tax reform package acceptable to at least some hard liners on both sides; barring that, the White House has signaled openness to Senate Majority Leader Mitch McConnell's "back-up plan" to effectively hand responsibility for raising the debt ceiling over to Mr. Obama.

In Thursday's meeting, the Democratic official said, there was little discussion of McConnell's plan. The official described it as "a fallback option."

McConnell said Thursday that when it comes to debt ceiling issues, the president should not "expect any more cover from Republicans on it than you got on health care. None." That effectively translates to a promise of zero support from the GOP, since no Republicans voted for the final version of the health care overhaul.

Meanwhile, cracks in the Republican coalition continued to emerge as a result of the deal, with Wall Street splitting with the Tea Party in calling for a deal to get done.

"No one can tell me with certainty that a U.S. default wouldn't cause catastrophe and wouldn't severely damage the U.S. or global economy," JP Morgan Chase CEO Jamie Dimon said Thursday. "And it would be irresponsible to take that chance."