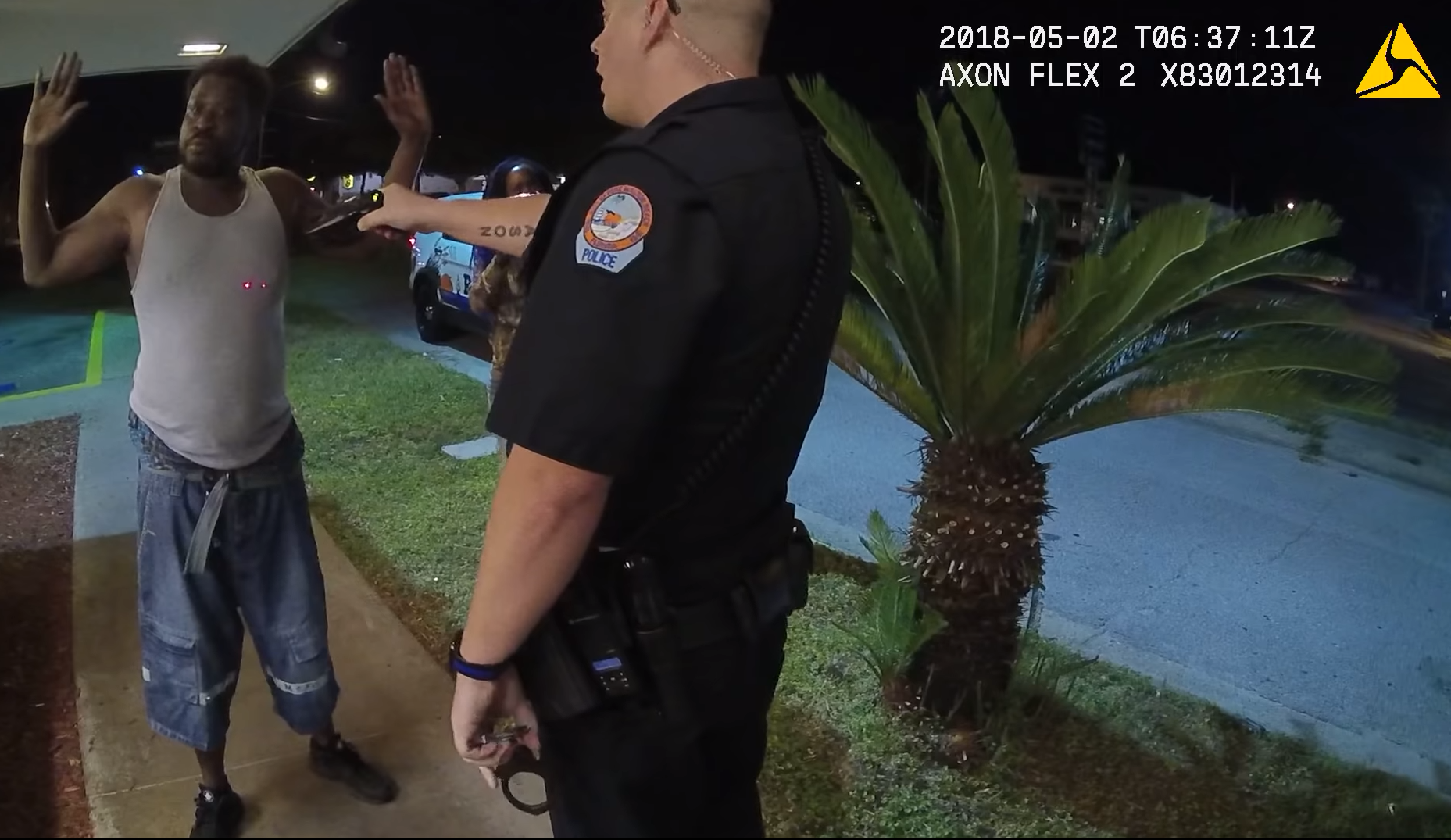 FORT WALTON BEACH, Fla. -- After a video of a black couple being detained at a Florida Waffle House after disputing their bill went viral, on Tuesday police in the beach community posted body camera video of the incident and said their officers committed "no misconduct" but that the "situation could have been handled differently by both parties."

The bodycam footage comes after arrests of black customers at Waffle House restaurants in several states have raised alarm, and spurred a discrimination investigation by a high-profile civil rights attorney.

According to the Fort Walton Police Department, officers received a call of a disorderly customer around 1:30 a.m. on May 3. Video from the officer's body camera shows officers asking a black man to come outside and talk to them.

The man says, who is on the phone inside, says, "I ain't going nowhere."

"Yeah, you are," says the officer.

"Oh, I'm gonna put my hands on you. Get out here. You want a trespass?"

The man and his girlfriend try to explain that they are waiting on an employee to fix their bill, but the officer keeps asking the man to come outside and "talk to me like a man." The man comes toward him and the officer says, "back up."

A little less than two minutes after the officers arrive, the man comes outside, holding his hands in the air. His girlfriend comes with him. She is recording the interaction on a phone.

The man attempts to explain that he was disputing the Waffle House bill, which he and his girlfriend believed contained an overcharge, but officers keep insisting he pay his bill "or you're gonna go to jail." One officer then points a Taser at his chest, then puts the man in handcuffs. His girlfriend asks the officers to come inside and talk to the employee with them so she can explain the bill, but instead they inform the man he is being arrested for theft and put him in the backseat of their cruiser.

At this point, the officers have not yet interviewed the employees at the Waffle House.

The man's girlfriend goes back into the restaurant and then comes out and says the employees won't talk to her until the officers come in. She is placed in handcuffs and put against the police cruiser. She is crying as she explains that they thought the orange juice only cost $1, but they were charged $2.50.

One officer then interviews the Waffle House employee in charge who explains that the charge was correct because the orange juice is only $1 if you also purchase a beverage, but the couple didn't purchase a beverage, they only asked for water with their meal. The employee said they "tried multiple times to explain" that to the couple, but "they kept yelling and arguing," and when the waitress threatened to call the cops, the man said go ahead.

The employee told the police they wished to press charges for non-payment of the bill. Upon hearing this, the woman, who is in handcuffs, cries, "I was going to pay the bill!"

"The problem is you guys wanna run your mouth," says the officer. "Right when I walk in the door, he wants to start talking about 'you guys aint gonna put your hands on me.' Okay, I'm trying to talk to him like a man to see what's going on, but he wants to start saying stuff like that. And then you wanna pull your phone, which that's fine, you've got the right to record...but what you did, the crime that you and your boyfriend or your husband committed is you didn't pay your bill."

The woman explains they didn't even get their food.

"We didn't get nothing from them, nothing at all. We haven't been served at all, so how's it theft?" she says through tears.

The officer then chastises her for arguing over $1 when her boyfriend had lots of cash on him.

While the two remain handcuffed and sitting in the back of separate police cars, the officer whose body camera is recording the incident confirms that the couple did not get their food. But, apparently frustrated that the handcuffed man interrupted him, the officer says to the other officers, "If you want to take him, take him. I don't care."

It becomes apparent the officers are not going to go forward with an arrest and one officer says to the man, "And you're going to never come back to this Waffle House again?" The man says he won't.

The man and woman are taken out of the police cars and their hands removed from cuffs. The man asks for the officer's badge number and one tells him, "You know I'm doing you a favor by not taking you to jail now?"

The man continues to try to understand why he was cuffed, explaining again that he came out of the Waffle House with his hands up. One officer says, "You a big dude." To which the man replies, "Y'all are bigger than me! You got big guns!"

Finally, the couple walks away and the officers receive another call.

In the Facebook post, the department said: "The Fort Walton Beach Police Department strives to provide superior police services to all citizens and uses opportunities such as this to learn and refine our interactions with the public."

In an emailed statement to CBS News, Waffle House said, "While our review of the Fort Walton Beach, Fla., incident is continuing, we think both sides could have handled this situation better. On our part, our employee could have done more to de-escalate the dispute before calling the police. We have spoken to our employees in the restaurant and will be doing additional training for the team members of this restaurant on the proper way to handle situations like this."

Waffle House also said that the couple came back to the restaurant the next day and were given a full refund, and that the company's CEO called the woman involved in the incident to apologize.