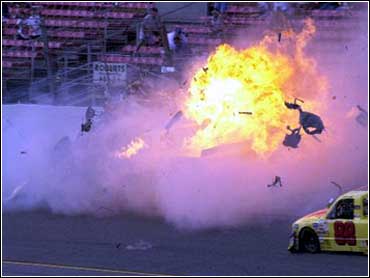 The biggest victory of Mike Wallace's career probably won't be remembered as much more than a footnote to a frightening, fiery crash.

"It's a shame that wreck happened, because if you people didn't enjoy that, I don't know what turns you on," Wallace said Friday after winning the inaugural Daytona 250 Craftsman Truck Series race. "This is such a huge win and a huge deal for the truck series."

There were a series-record 32 lead changes in the most exciting race of Speedweeks. A day earlier, in the twin qualifying races for Sunday's Daytona 500, there was one lead change.

"If we hadn't had that big wreck, this would have been one of the most phenomenal races anybody had ever seen," Wallace said. "I'm glad to hear that Geoffrey is OK, and sorry that the guys got tore, but I think we gave you a heck of a show."

The crash on lap 57 involved 13 trucks and injured nine fans and two drivers. What remained of a shredded safety fence near the finish line stopped the nearly 2-ton vehicle just 10 feet short of front-row spectators.

They scrambled for cover as debris and flames shot into the crowd, and a black cloud of smoke hung over the track as blinded drivers crashed into the crumpled shell of Bodine's truck again and again.

After smacking into the wall at about 190 mph, Bodine cartwheeled and flipped wildly down the track in flames. When he came to a stop, about the only thing left of his truck was the roll cage that saved his life.

"I've never had a wreck like that in my life," Bodine said.

He wound up with a broken wrist, ankle and vertebrae, and a concussion. This morning, Bodine was in stable condition in the intensive care unit at Halifax Medical Center.

Driver Jimmy Kitchens was released this morning after an overnight stay. His injuries were not serious.

Five fans were treated at the hospital for injuries that included a broken arm and cuts and bruises. Two stayed overnight for surgery - a man with the broken arm and a woman with facial cuts.

Four other fans were treated for minor injuries at the track's care center. None of the fans was burned.

Wallace, who won the race with a thrilling, last-lap pass, watched the mayhem in his miror.

B.A. Wilson, one of the drivers involved in the wreck, thought it was the worst he'd ever seen.

The crash, which delayed the race for about 2 1/2 hours during repairs to the fence, began when rookie Kurt Busch tapped Rob Morgan, who in turn sent Bodine into the wall.

"I was just thinking, `Friends today and try not to make any enemies,"' said Busch, who finished second. "I think I may have done the opposite."

Bodine's truck hit the 4-foot-high wall, which supports the 9-foot-high safety fence, and ripped off about 150 feet of wire mesh and snapped support poles.

The Ford disintegrated into an unrecognizable heap of scrap metal. The engine was torn away from the truck body and landed on the grass next to the front straightaway.