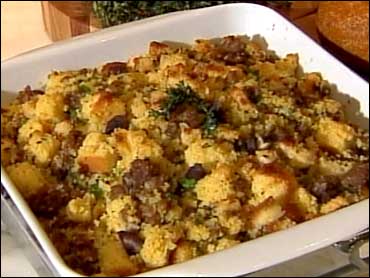 Thanksgiving week can be stressful, observes celebrity chef Bobby Flay: There's lots of planning to do: Dealing with in-laws, making sure there are enough chairs to accommodate everyone, checking on your turkey order, and of course, buying enough cranberries off the shelves before they run out. But the No. 1 dilemma at Thanksgiving has to be the kind of stuffing will you make this year.

Flay offers his thoughts on the matter, and advice to ease your mind:

The fact is, the taste of your stuffing is what will decide for your friends and family whether it was a successful Thanksgiving or not. And trust me on this: Just one bad Thanksgiving dinner will stay on your family's record for generations. We're talking a life sentence, with no parole.

You've made the cranberry sauce two days ahead, so that's fine. And your side dishes are tried-and-true: the mashed potatoes, the sweet potatoes, the pearl onions, the string beans. But the make-or-break is the stuffing!

One other thing: If you're trying to lose and not gain weight on Thanksgiving, you can't come to my house. We break calorie records year after year, and are proud of it. It makes the late afternoon post-turkey nap that much better.

So, let's get back to the stuffing.

Your choices begin with the bread: white, wheat, pumpernickel, and cornbread. And let's not forget wild rice, wild mushrooms, and sausages such as andouille or chorizo. Do you put nuts in it, such as walnuts or almonds? How about dried fruits, such as apricots or cranberries?

And what about the old classic: oyster stuffing? I admit it's tempting, but I've never done it. Not everyone likes oysters, especially when they're embedded in bread and cooked for three or four hours.

Honestly, I don't think I can take the risk. Remember: Future generations will not forgive or forget, and I, for one, do not want my daughter stuck with a legacy of bad Thanksgiving stuffing.

So, I celebrate the turkey with the same stuffing every year. Why? Because I know it works, and it's only once a year. It's South by Southwest, two of my favorite regions. Are you ready? Let's get cooking.

And add a lot. Let them know it's in there.

Next, I crumble day-old stale cornbread over the cooking vegetables and sausage. Mix it well and toss warm chicken stock over it. Make it good and moist.

Here's the key: If you think it's moist enough, add more. The cornbread will drink it up as it cooks.

Throw in an egg or two that you beat into submission first in a separate bowl, and mix it into your stuffing mixture, quickly, so the eggs don't scramble. And then shower your creation with freshly chopped thyme, sage, and flat-leaf parsley, and season it all with kosher salt and cracked black pepper.

Make enough so you can stuff the bird and have enough left over to make dressing that you'll bake in a separate pan on the side.

Mmm, I can smell it now!

I wish you luck at the stove this Thanksgiving, no matter what kind of stuffing or dressing you decide to try. There's not much at stake: just your family name:

Method
1) Melt the butter in a medium saucepan over medium-high heat. Add the chorizo and cook until golden brown, remove the chorizo to a plate lined with paper towels.
2) Add the onions, celery and carrot to the pan with the fat. Season with salt and pepper and cook until soft then stir in the chorizo.
3) Place the cornbread in a large bowl. Add the onion mixture and two cups of the stock. The mixture should be quite wet; if it appears too dry, begin adding the remaining stock, a half cup at a time. Stir in the sage and thyme and season with salt and pepper to taste.
4) Stuff the cavity of the turkey with the mixture, or scrape it into a buttered 10-inch baking dish and bake in a 375 degree Fahrenheit oven until set and golden brown on top, about 30-40 minutes.