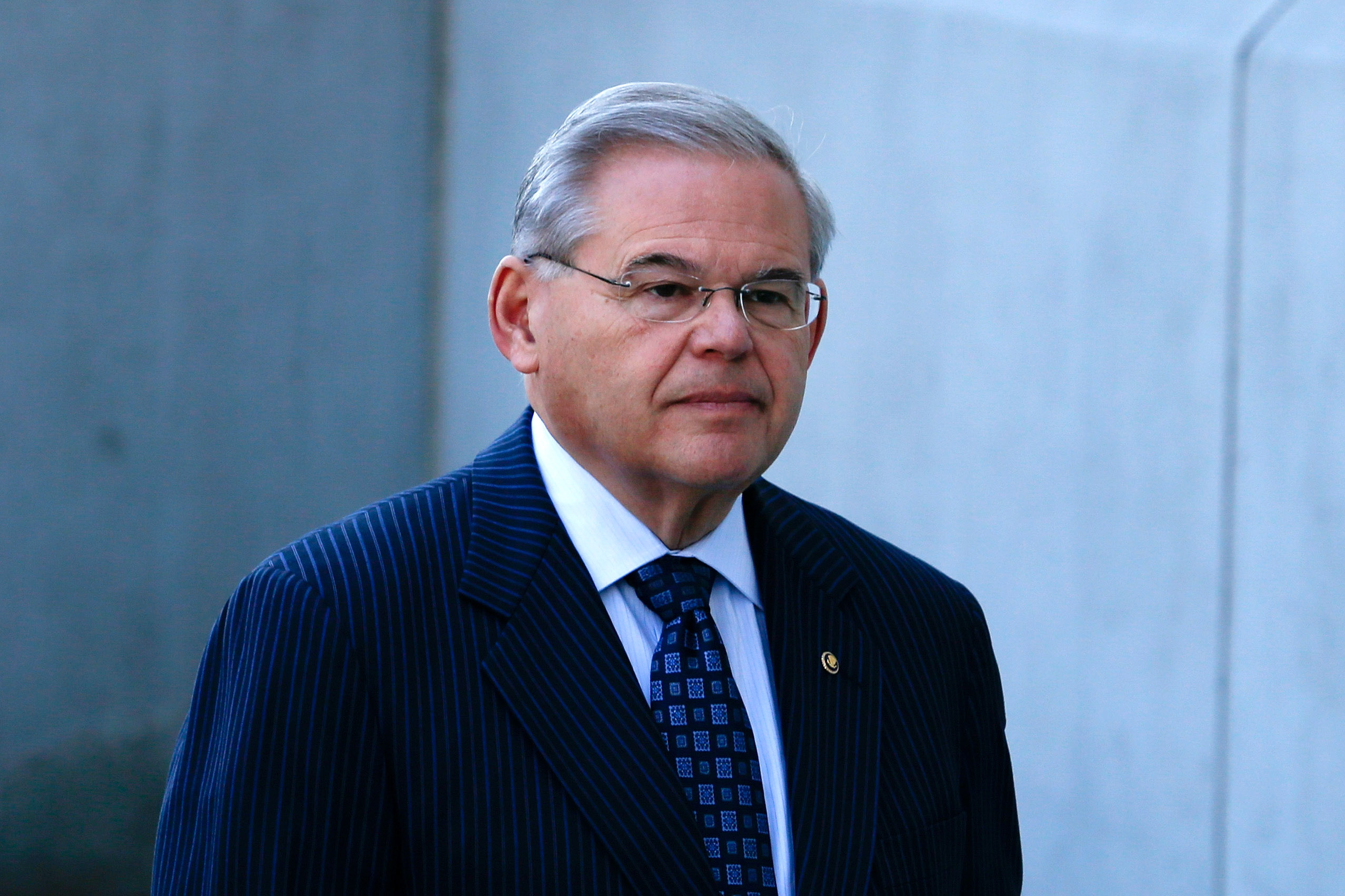 New Jersey Sen. Bob Menendez struck a defiant tone on Thursday after he was arraigned on federal corruption charges, telling reporters outside a federal courthouse in New Jersey that he's "confident" the allegations against him will be "proven false."

"For nearly three years, the Justice Department has pursued allegations based on smears launched by political opponents trying to silence me," Menendez said. "Now they have laid out their case. We will finally an opportunity to respond on the record, in court, with the facts."

Menendez was indicted Wednesday by the Justice Department for allegedly using his Senate office to advance the business interests of a friend and donor, Florida eye doctor Dr. Salomon Melgen, in exchange for gifts. He pleaded not guilty at his arraignment.

During his brief statement on Thursday, the senator was flanked by his lawyer, Abbe Lowell, who framed the allegations against his client as the latest in a series of recent mistakes made by prosecutors with Justice Department.

"As we have seen in so many cases, from former [Housing and Urban Development] Secretary Mike Espy in 1999 to Sen. Ted Stevens in 2007, and two years ago in the case of Sen. John Edwards, prosecutors at the Justice Department often get it wrong," Lowell said. "These charges are the latest mistakes."

Investigators have highlighted three different instances in which they believe Menendez leveraged his public office to assist Melgen.

"First, Menendez allegedly pressured executive agencies in connection with a conflict between Melgen and the government of the Dominican Republic relating to a disputed contract that Melgen purchased to provide exclusive screening of containers coming through Dominican ports," the Justice Department explained Wednesday. "Second, Menendez allegedly advocated on behalf of Melgen in connection with a Medicare billing dispute worth approximately $8.9 million to Melgen. Third, Menendez allegedly took active steps to support the tourist and student visa applications of three of Melgen's girlfriends, as well as the visa application of the younger sister of one of Melgen's girlfriends."

In return, Menendez received "flights on Melgen's private jet, a first-class commercial flight and a flight on a chartered jet; numerous vacations at Melgen's Caribbean villa in the Dominican Republic and at a hotel room in Paris; and $40,000 in contributions to his legal defense fund and over $750,000 in campaign contributions," investigators alleged. "Menendez never disclosed any of the reportable gifts that he received from Melgen on his financial disclosure forms."

Menendez pronounced himself "outraged" on Thursday after the indictment was handed down.

"I have always conducted myself in accordance with the law. That's who I am and I am proud of what I have accomplished and I am not going anywhere. I'm angry and ready to fight because today contradicts my public service career and my entire life," he said. "This is not how my career is going to end."

Investigators have been probing the relationship between Melgen and Menendez for several years. The pair first came under scrutiny when the FBI received a tip that the senator had solicited underage prostitutes during a trip to the Dominican Republican that he took on Melgen's private jet in 2010. That accusation soon fell apart after the women withdrew their accusations.

Investigators continued examining the trips that Menendez took on Melgen's private jet in 2010, and in 2013, the senator reimbursed the doctor for the free airfare, calling his earlier failure to do so an "oversight."

Menendez has been similarly dismissive of the accusation that he improperly pressured Medicare officials to change their provider reimbursement formula in a way that would benefit Melgen. The doctor was accused of overbilling the government by $8.9 million, and the FBI raided his office in 2013. Melgen insisted he'd simply been confused by what was allowed under the complex payment formula.

On Wednesday, Menendez said Justice Department investigators "don't know the difference between friendship and corruption and have chosen to twist my duties as a senator and my friendship into something that is improper."

"They are dead wrong and I am confident that they will be proven so," he added.

Menendez has given no sign that he plans to step down, but he has voluntarily relinquished his post as the ranking Democratic member of the Senate Foreign Relations Committee while the investigation runs its course.