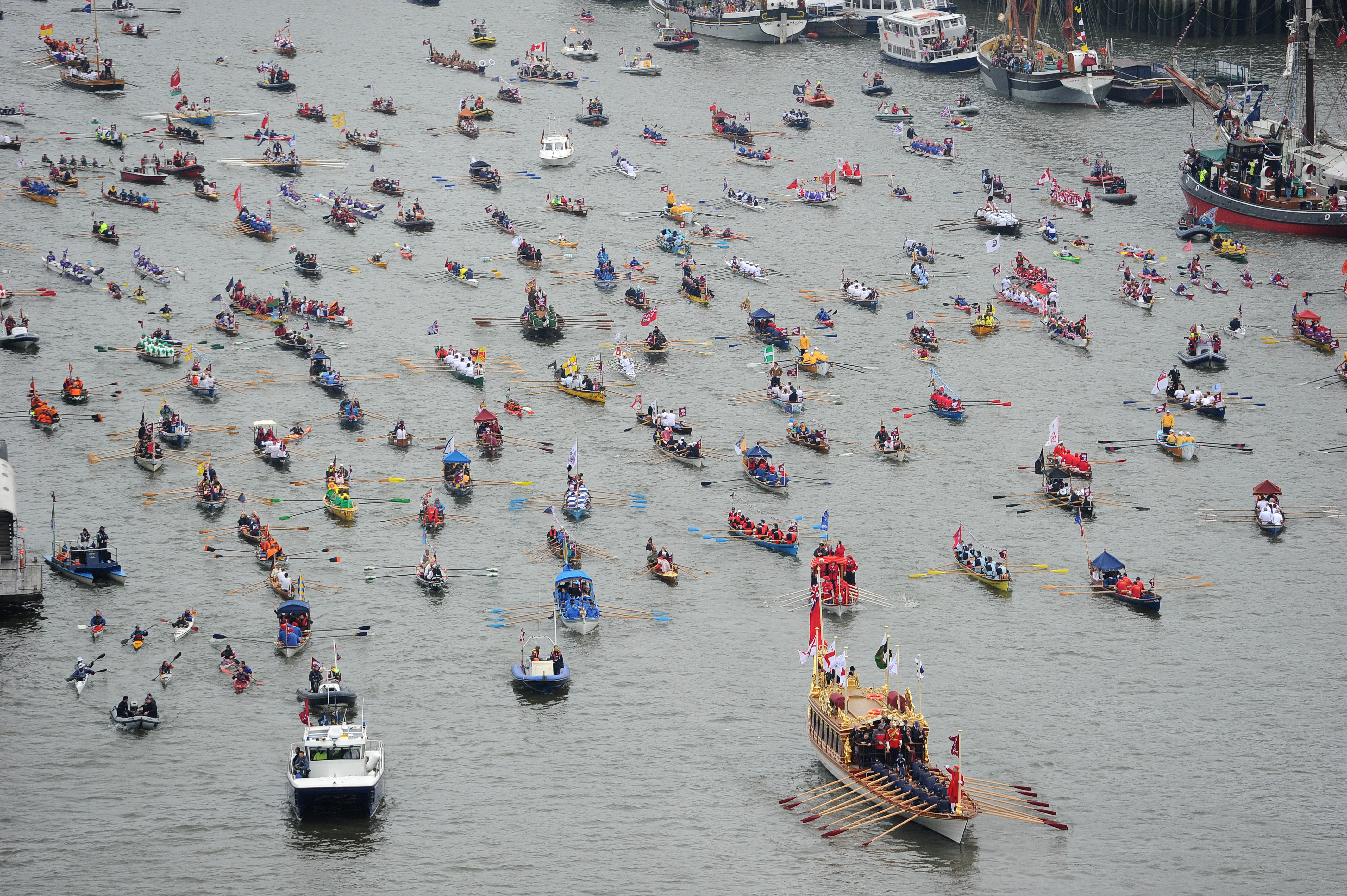 (AP) LONDON - More than 1,000 boats will sail down the River Thames on Sunday in a flotilla tribute to Queen Elizabeth II's 60 years on the throne that organizers are calling the biggest pageant on the river for 350 years.

Despite cool, drizzly weather, hundreds of thousands of people lined the riverbanks between Hammersmith and Tower Bridge in London, feting the British monarch whose longevity has given her the status of the nation's favorite grandmother.

Spectators cheered the queen and members of her family as they arrived for their trip aboard a flower-bedecked royal barge, accompanied by skiffs, barges, narrow boats, motor launches, row boats and sailing vessels from around the world.

The queen wore a silver and white dress and matching coat, embroidered with gold, silver and ivory spots and embellished with Swarovski crystals to evoke the river, as she and her husband Prince Philip were ferried by motor launch to the barge Spirit of Chartwell

Prince William and his wife the Duchess of Cambridge - he in his Royal Air Force uniform, she in a red Alexander McQueen dress - and Prince Harry were among senior royals accompanying the queen on the river trip.

Hundreds of people ignored the persistent rain and camped out overnight to secure prime riverside spots. Crowds swelled into the thousands Sunday, with revelers in hats, flags, leggings and rain ponchos adorned with the Union flag mixing with burger and cotton candy vendors along the 7-mile (11-kilometer) route.

"It would have been wonderful if it had been sunny like last Sunday but we have come prepared," said 57-year-old Christine Steele. "We have got blankets, brollies (umbrellas), flags and bunting. We even got our glittery Union Jack hats and wigs, and the Champagne is on ice."

The spectacle is a tribute to Britain's past - monarchs used the river as their main highway for centuries, and naval power built the island nation's once-great empire - as well as to its abiding love of boats and the sea.

River processions were once common in London. The last comparable royal pageant was held for King Charles II in 1662, when diarist Samuel Pepys recorded boats so numerous he could "see no water."

Sunday's flotilla will include more than three dozen "Dunkirk Little Ships," private boats that rescued thousands of British soldiers from the beaches of France after the German invasion in 1940 - a defeat that became a major victory for wartime morale.

The four-day Diamond Jubilee celebrations also include thousands of street parties across the country on Sunday. Prince Charles and his wife Camilla, Duchess of Cornwall, joined hundreds of people for a damp al fresco lunch on Piccadilly, one of London's main shopping streets.

Not everyone in Britain is celebrating. The anti-monarchist group Republic held a riverbank protest Sunday to oppose the wave of jubilee-mania.

"People are sick and tired of being told they must celebrate 60 years of one very privileged, very remote and very uninspiring head of state," said the group's chief executive, Graham Smith. "The hereditary system is offensive to all the democratic values this country has fought for in the past."

Jubilee celebrations kicked off Saturday with a royal day at the races, as the queen watched a horse with the courtly name of Camelot win the Epsom Derby.

The 86-year-old monarch and her husband, Prince Philip, visited Epsom racecourse south of the capital for the Derby, one of the year's biggest horse racing meetings.

The queen is a racing fan and horse breeder who has attended the Derby for decades and reads the Racing Post each day over breakfast, although unlike many of her subjects she does not gamble.

On Monday the queen will attend a pop concert in front of Buckingham Palace featuring Elton John and Paul McCartney.

Jubilee events end Tuesday with a religious service at St. Paul's Cathedral, a carriage procession through the streets of London and the queen's appearance with her children, grandchildren and great-grandchildren on the palace balcony.

The queen took the throne in 1952 on the death of her father, King George VI, and most Britons have known no other monarch.

Prime Minister David Cameron - the 12th British leader of the queen's reign - paid tribute to the monarch's "extraordinary level of physical energy, mental energy, and above all devotion to her people, to the institutions of this country, to the way our democracy works."

In a jubilee gift from Britain's politicians, lawmakers from the three main parties have backed a motion calling for the tower housing Big Ben - the beloved London bell that chimes the quarter hour - to be renamed the Elizabeth Tower in the queen's honor. It's currently called the Clock Tower.

While many Britons used the long weekend to relax - and an estimated 2 million left the country on vacation - writers and religious leaders used the occasion to reflect on how Britain has changed over the queen's reign, from a war-scarred imperial power to a middle-sized power with oversized cultural clout.

Archbishop of Canterbury Rowan Williams, spiritual head of the Anglican Church, expressed a widely held view when he said Britain had been lucky to have Elizabeth as monarch throughout a period of rapid change.

"It seems to me that what her importance has been for most people in this country has been as a sign of stability, a sign of some kind of security," Williams said in a jubilee video message.