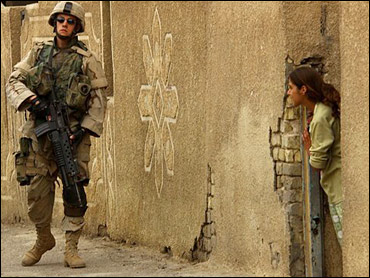 Increasing insurgent attacks and the U.S. military's offensive to retake the rebel stronghold of Fallujah have made November one of Iraq's bloodiest months.

With the month a little more than half over, the U.S. death toll is nearing 100. That makes November the second-deadliest month in Iraq since the war began. The worst month was last April, with 135 deaths, a period that included the first battle of Fallujah.

According to an Associated Press tally, the American death toll in the war has surpassed 1,200 with new Defense Department identifications Tuesday night and Wednesday.

The total of 1,208 deaths included 1,204 identified members of the U.S. military, three military civilians and one unidentified soldier reported to have died Tuesday in Balad.

Nearly 9,000 GIs have been wounded since the beginning of the war, more than half of them seriously.

Here are the latest developments in the war: