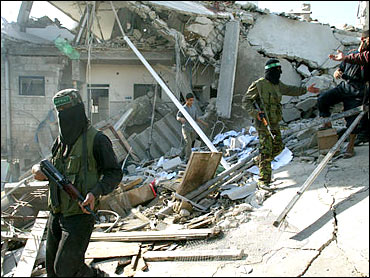 Israeli troops stormed a Hamas stronghold on Thursday, setting off the most intense gunbattle in the Gaza Strip in 2 1/2 years of fighting, just a day after mediators presented a Mideast peace plan. Twelve Palestinians were killed, including two children and a top bombmaker.

Palestinian officials and Israeli opposition leaders accused Prime Minister Ariel Sharon of using the raid to undercut the new Palestinian prime minister, Mahmoud Abbas, before he has a chance to fulfill a promise to disarm militias.

However, a Sharon adviser said Israel would not halt its anti-terror campaign and would not give Abbas, sworn in Wednesday, a grace period.

The violence came just a day after international mediators presented a new peace plan, the so-called "road map" to Palestinian statehood within three years. The Palestinians have accepted the plan, while Israel has expressed major reservations.

The road map starts with a Palestinian crackdown on terror groups and an Israeli freeze on Jewish settlements in the West Bank and Gaza Strip, combined with a gradual Israeli pullout from the autonomous Palestinian zones its troops have reoccupied during 31 months of fighting.

In Madrid, Secretary of State Colin Powell urged both sides to take steps toward implementing the plan. "We need to see the end to terror — and actions on the Israeli side as well," Powell said at the start of a trip through Europe and the Middle East. Powell was expected to meet with Sharon and Abbas next week.

The Gaza City incursion came a day after Hamas carried out a suicide bombing in a Tel Aviv pub that killed a waitress and two musicians. However, Israeli military officials did not link the raid to the bombing, saying they were after three top Hamas fugitives in Gaza — brothers Yousef, Mahmoud and Ayman Abu Hein.

At about 2 a.m. Thursday, tanks and jeeps drove into Gaza City's Shijaiyah neighborhood. Troops surrounded a four-story apartment building that was home to 60 members of the Abu Hein family.

Dr. Fadel Abu Hein, a prominent child psychologist and a brother of the wanted men, said the apartment building came under intense fire.

"We are sitting in full darkness. Children are screaming. We are trying to calm them down, but bullets are coming from all directions," he said.

The Israeli commander of the operation, Brig. Gen. Gadi Shami, said the three wanted men tried to keep their relatives in the building as a buffer, and that soldiers broke in to rescue the civilians.

However, members of the Abu Hein clan said soldiers used several civilians, including women, as human shields in their search of the building.

Once only the three fugitives were left in the building, troops blew it up. Doctors said the three brothers were already dead by the time of the explosion, noting their bodies were riddled with bullets. Yousef Abu Hein was a top Hamas bombmaker who was imprisoned both by Israel and the Palestinian Authority.

The blast was so powerful that more than a dozen adjacent homes were damaged, some severely.

In addition to the Abu Hein brothers, five other gunmen were killed. The other dead were two adult civilians, including a mentally handicapped man, and two boys, ages 2 and 13.

The 2-year-old, Amer Ayad, was hit by a bullet to the head while he was near a window in his home, said his father, Ahmed Ayad. "Is this the new peace President Bush promised?" Ayad said. "They wrote the answer using the blood of my son."