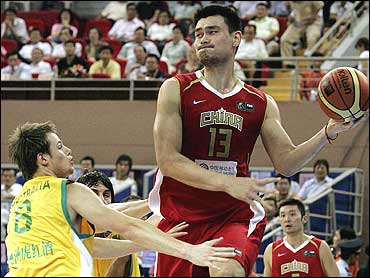 
Thanks to Yao Ming, Jaws might be saved and bloggers are thankful. When the basketball star denounced shark fin soup, the blogosphere took notice. And, is Al Gore full of hot air when he discusses global warming? Some bloggers say he doesn't practice what he preaches. Plus, which fast-food chain is giving away toy Hummers as gas prices rise? Find out below.

When 7-foot-6 NBA star Yao Ming announced at a Beijing press conference held by the conservation group WildAid that he pledged never to eat shark fin soup ever again, it was hardly front page news. But, many bloggers sure were impressed with the basketball giant.

"I pledge to stop eating sharks fin soup and will not do so under any circumstances," Yao told a press conference. "For the sake of our future, please join us in protecting endangered wildlife."

This is a big deal in China. As the New York Times explains: "Swearing off shark fin may not sound like much to Westerners, but here in China, this most expensive delicacy has a long and honorable history … And Hong Kong and Beijing government officials — not to mention thousands of businessmen hoping to close the next big deal — swear they absolutely have to treat their guests to shark fin soup as a show of respect and honor."

Many bloggers get it. "I think that Yao's 'coming out' against Shark Fin soup is important for Chinese culture by showing that a major star can make a somewhat political (albeit safe) stand that demonstrates intelligence," The Black China Hand writes. "The big test will be what the average Chinese citizen makes of Yao's stance (if they get a chance to know it)?"

Charles Chen agrees. "Hopefully, this leads to a decrease in the incredibly grissly, wasteful, and disgusting practice of finning sharks," he blogs.

In fact, as the blogger Kayakas notes, last year, "following protests (and public shunnings by director Ang Lee and actor Tony Leung, among others) Hong Kong University stopped serving the (potentially mercury-heavy) delicacy while Disney decided to give up its plans to serve shark fin soup at its Hong Kong theme park."

But, to be sure, not everyone is on board with Ming's shark fin stance. "Yao Ming is ashamed of being Chinese," Kevin at Chopstix writes, since he is renouncing a popular cultural delicacy.

As the heat wave spread across the nation, talk of global warming was rampant. So it's no wonder Al Gore's movie "An Inconvenient Truth" was largely championed throughout the blogosphere. But now, bloggers have turned their attention to Gore himself, questioning his green credentials.

An editorial piece in USA Today — written by Peter Schweizer, a research fellow at the Hoover Institution and author of "Do As I Say (Not As I Do): Profiles in Liberal Hypocrisy" — says Gore may not practice what he preaches when it comes to the environment. The column was one of the top news stories on blogs this week.

Schweizer's criticism of Gore focuses on the former vice president's personal environmental record. "For someone who says the sky is falling, he does very little," Schweizer writes. "He says he recycles and drives a hybrid. And he claims he uses renewable energy credits to offset the pollution he produces when using a private jet to promote his film. (In reality, Paramount Classics, the film's distributor, pays this.)"

Many conservative bloggers say they are hardly surprised. "Well, we all knew Al Gore is a hypocrisy-ridden shill for a money-making apocalypse hysteria scam, but boy is it nice when somebody actually says it!," Brian Mattson writes at The Banty Rooster. "The conclusion? Either Al Gore lives a lifestyle against his own self-interest, or not even he believes his own propaganda."

The Rising Jurist also sees hypocrisy. "With Al Gore flying his jet all over the place to promote his new book/movie/PowerPoint presentation An Inconvenient Truth, I can't help but find humor in the hypocrisy," he blogs.

And Jerry Furhman wants to make a deal. "Tell you what. I'll give up my gas-guzzling SUV (with its ass-kickin' V-8) and I'll curtail the use of greenhouse gas emitting fuels around the farm the day that Al Gore… starts practicing what they preach," he writes at From On High.

Not surprisingly, most liberal bloggers were much more understanding. "Look, maybe Al's not the poster child for conservation, but I'm sure it's occurred to him that even his family needs to change its ways. So what? Does that reduce his message? No. Not one bit," Zennie Abraham blogs.

Others questioned Schweizer's environmental credentials. "I also notice in looking at Mr Schweizer's areas of expertise that the environment isn't one of them," Jan at Progressives For Al Gore writes. "Perhaps that is why in this sorry excuse for an article he didn't even touch upon the scientific facts in the movie or attempt to show the reader he has any sort of knowledge on the topic whatsoever....because he doesn't have any."

In an election year, politics is on many bloggers' minds. So, is Gore playing politics with the environment? "What's this all about? Surely Gore wouldn't simply be using environmental concerns as a platform upon which to measure his potential as 2008 presidential candidate ..." The FiveForty blogs.

And Some Gas To Go?

Perhaps promoting Hummers during a summer of record-high gas prices isn't the best idea. At least, that's what many environmentalists are saying about McDonald's "Hummer of a Summer" promotion, and many conservation-minded bloggers agree.

The promotional campaign includes toy Hummers in children's Happy Meal boxes, and new ads featuring a family riding in a Hummer on the way to a McDonald's.

Bill Lamar, McDonald's chief marketing officer, told the New York Times in a written statement that the promotion was intended to bring "the fun and excitement of Hummer vehicles" to "McDonald's youngest guests."

As blogger Aaron notes, albeit ironically, on Streetsblog, "unlike the real Hummer which get 11 miles per gallon on a good day, these vehicles are 'fun-fueled.' "

General Motors says the H2 Vortec "is one of the most efficient engines in production today." But many bloggers aren't buying it.

"Let's give one of the most useless and mind-numbingly wasteful vehicles on the market to small children! Nice work MickeyD's, I smell a boycott coming," Clint Slaughter writes.

Other bloggers question the intelligence of this marketing campaign. "Yeah, let's encourage kids to want to drive completely unnecessary large vehicles that consume a ridiculous amount of gas? There is simply no need for this. Especially now," Daisy Velour writes on MySpace.

But is the outrage going too far? After all, McDonald's isn't about to give away actual cars, some bloggers point out. "While I agree with the environmental groups that Hummers are in fact gas guzzlers, these toy Hummers that McDonald's has are just that, TOYS!" Pierce Mattie writes. "Targeting McDonald's toy Hummers is just a waste of time and resources for these environmental groups. It's people like this who dilute messages and alienate people from the core message that we need to be kinder to our environment."

Greg Epps agrees environmentalists are overreacting. "The spotted owl will not die off because McDonalds gave kids a toy Hummer," he writes at der5er.

Occupy Wall Street: Where are the leaders?

What Does "Reagan Republican" Mean In '07?